According to the Russian Defense Ministry, 35,000 terrorists have been killed in Syria from February 27 to September 1. 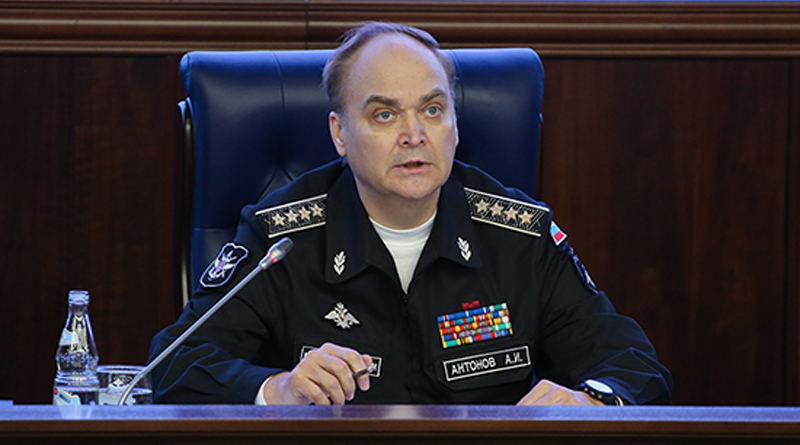 Thirty-five thousand terrorists, including 2,700 natives of Russia and countries of the Commonwealth of Independent States (CIS), have been killed in Syria, the Interfax news agency reported on October 7, citing Deputy Russian Defense Minister, Anatoly Antonov.

As the RIA Novosti news agency noted, all these terrorists were killed in the period from February 27 to September 1. The Russian official said that all in all, Russian military managed to liberate 586 settlements and 12,360 square kilometers of the country’s territory. Antonov also added that strikes on terrorist groups in Syria were a part of a plan, approved by Russia and the US on February 22.

The representative of the Russian Defense Ministry pointed out that aircraft of the US-led coalition carried out 6-15 airstrikes per day only on facilities of the Islamic State (IS) terrorist group. “I think, any further comments are superfluous,” Antonov concluded.

The Russian Aerospace Forces launched its operation in Syria on September 30, 2015. The Russian combat air power supported ground operations of the Bashar al-Assad’s Army. Russian fighter jets and helicopters are based at the Hmeymim air base in the Syrian province of Latakia.

On March 15, Russian President Vladimir Putin ordered to withdraw the main part of the Russian group from Syria, since the task, assigned to the Defense Ministry, has been completed.

Earlier, the State Duma ratified an agreement between Russia and Syria on the termless deployment of a aviation group of the Russian Armed Forces on the Syrian territory.

Let’s make it another 35,000 but in less time. Go Russia, Syria, Iran and remove the terrorist scum.

Bravo to the brave people of Syria…

Russia has done a huge service to all peoples groups of the world. The world and each nation should be paying for a percentage of Russians military operations for ridding the world of these fake-Sunni who pledge allegiance to Tel Aviv.

No matter what Super Power we talk about, I’m always weary of their true agendas. I admire what the Russians are doing in Syria and the international stage, but not on the home front, yet. One good example why I’m disconcerted, is the knowledge of an area in Kazachstan named Semipalatinsel-21. From 1949 till 1989 some 200 000 people became human guinea pigs as scientists explored the potential and dangers of nuclear weapons. Russia had yet to acknowledge it’s responsibility for the inhumane experiments carried out on the population and pay for medical treatment. And if a country can do this to its own people, what is it capable of doing to the enemy? In the end, the lower spectrum of society will always get shat on by those in power ie. the government. No matter what country or political belief.

You do realize that this is 2016, right? And what you’re talking about was during the SOVIET times that the RUSSIAN FEDERATION is not responsible for?

Do you spend much time pouring through archives, looking for something to bitch about? If you think THAT’S bad, go research the experiments THE UNITED STATES has done on THEIR people! THAT will curl your hair for sure,

Probably about 36,000 women and children given the war crimes being committed by Russia and Syria.

Syria is one of the richest countries in the world regarding oil and gas reserves, not to mention agriculture and industrial production. This American war for “regime change” , in Syria , under the pretext of “humanitarian intervention” , is a blatant act of assault and robbery . Syria is not the Congo , it has been an ally of Russia for over 30 years , this war is both illegal and immoral. All wars are a waste of “OUR TIME” , and create unnecessary horror , but I would hope you would strive to rid your country of terrorist’s , otherwise the horror goes on .

What’s “humanitarian” in what US dies in middle east, “EVER” – please enlighten us?

Agreed on that point; but that does not suggest the Russian’s haven’t been blowing children to bits which we know they have and attacking groups that the US and coalition consider moderate.

And yes, Israel and Saudis have been doing much the same, but are not glorifying the bodycount of babies…

There is not much oil or agriculture…what are you talking about?

Not much oil ? While ISIS has significant control of existing fields, so does the government. Syria has been selling oil for more than 40 years . There are huge untapped reserves both off-shore and under the Golan Heights , both comparable to SA . The agricultural fields are ancient and abundant , where not occupied by A Nusra or ISIS . “Blowing children to bits” , “we know they have” , sounds like you are not familiar with the b’ll shet , quota that makes up any war. Its called propaganda , if you chose to believe it , do so , but that does not make it so. The Wahhabi jihadists that ride with A Nusra are not “moderate” , regardless of administration claims .

Syria would likle be a net importer of petroleum even absent war in early 2020s.

Its agriculture is decimated by drought.

this one’s a paid troll…don’t waste your time.

Really ? You think the US is the driver of the Syrian revolution? US air strikes have only once hit Syrian troops.

The US is not the main driver, but a co-sponsor of this salafist Saudi driven movement to counter Iran. How else do Al-Nusra manage to recieve American made MANPADS? Hillary Clinton said so herself in her leaked emails. The issue with the US government being in Syria. I thought they where there to fight/bomb ISIS? They have the most potent air force in the world, but what have they achieved in the last 5 years? They have not bombed Al-Nursah since 2013 as Mark Toner mentioned that 2 weeks ago. I agree with partitioning of Syria and Iraq. The Kurds want their freedom and their own country. Freedom is not cheap, I know that through my grandparents tales. They fought and survived through WW2 and the Warsaw uprising. 200 000 civilians died in 8 weeks. I for one do not wish war upon any creature, no matter how big or small. Was is brutal and unforgiving. It takes no prisoners and in the end there are no winners. Have yourself a lovely day

Perhaps the kurds are going to have to settle for getting along with everybody else, because all the land is taken. Nobody’s going to just give them their own country because they think they’re worth it. They need to get over themselves and learn to compromise and get along.

Kurds do deserve their own country. 1/4 of Iraq and 1/4 of Syria. Only the Turks are stopping that.

That is the same attitude a few countries had after WW1 when it came to creating land for the Polish people. All the land was taken and non of the countries where willing to compromise. In the end war was the only comprise they knew. The Kurds in Syria will not give their land back and more so in Iraq. Assad nor Baghdad are in no position to dictate terms to the Kurds. I feel I’ll be an old man by the time they kick ISIS out of Syria and Iraq. Wake me up when it’s over.

You will likely see a lot more man pads in Syria.

The US has made a lot of progress against ISIS. But in Iraq with a ground game. The lack of a ground effort and the muddled support of “moderate rebels” has been ineffective in Syria.

Russia and Syria have not focused on ISIS either in Syria. Razing Aleppo will not harm ISIS.

The people of Syria will continue to suffer as the US will just let the Saudis continue their proxy war with Iran at a greater intensity. Russia will likely be entrenched further.

Turkey is the wild card and eventual mediator.

Quite a troll as well.

Not fake and not related to Ukraine. I actually do believe Russia has interests in Ukraine that should be respected, but I also believe Russia is responsible for shooting down MH-17 by supplying modern BUK missiles and having Russian troops operate them. I dont think Putin gave the order to shoot civilian airliner, but the cheering of the separatists when they thought they shot down a transport is pretty obvious. The US has got outof its way NOT to ARM Ukraine.

That is more than the 11,033 dead terrorists given by wikipedia in ” Casualties of the Syrian Civil War ” for March through August, 2016 [ albiet excluding ISIS ]. Mind you, wikipedia would be swallowing terrorist figures which dress up combatants as poor little civilians. I have, based solely on wikipedia figures, a conservative minimum of 102,000 terrorist dead in Syria for the entirety of the conflict [ specifically excluding ISIS ], but if one adds another 18,000+, based on these Russian figures, then its up over 120,000 and closer to wikipedia’s more general estimations of circa 140,000 or more, since wikipedia refers to 51,000 dead ” foreign fighters ” against the Assad Government which wikipedia MIGHT not be including in its exact and conservative toll of 102,000 to 104,000 anti-government combatant dead.