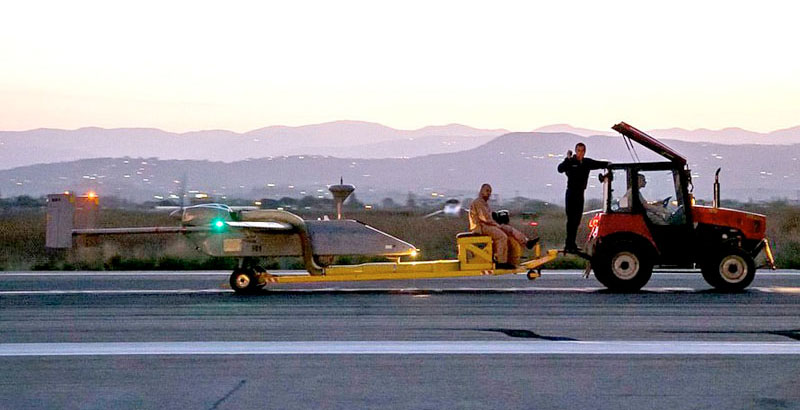 The Russian Forpost unmanned aerial vehicle at an air base in Syria (Photo: geo-politica.info)

On March 18, the Russian Ministry of Defense released two videos showing recent pinpoint strikes which were carried out with Forpost-R combat drones. The strikes targeted positions, ammunition depots and a communication center of Ukrainian forces.

The Forpost-R is a modernized variant of the original Forpost drone, which is a licensed copy of the Israeli IAI Searcher. This version made from Russian components and has a domestic software.

In one of the videos released by the Russian MoD, the Forpost-R appears to be armed with two KAB-20 guided bombs. The light glide bomb is available in two versions, the Kab-20L, which is only guided by a satellite-aided INS [inertial navigation system], and the Kab-20S, which is also equipped with a semi-active laser seeker.

Russia has already lost two Forpost drones over Ukraine. The wreckage of one of the lost drones included Israeli-made components, which indicates that it was from the older versions.

The Forpost-R is not the only type of Russian combat drones taking part in the ongoing special military operation in Ukraine. The Russian MoD released several videos showing pinpoint strikes on Ukrainian forces by Kronshtadt Orion combat drones in the last few weeks.

The experience gained from the special military operation in Ukraine will likely help Russia to further develop its drone capabilities.

Condolences to the fallen Azovisis and Ciaisis operators. May they rest in pieces…

Ukkropbots, videos of captured AZOV fighters in Mariupol are beginning to surface where they praise Chechnya. I thought we were winning bros? And why are the brave azov fighters converting to chechen ideology within minutes of their capture, does anyone know?

How many children has Putin the terrorist cockroach murdered today? Do they keep a record of that in Moscow? Or do they just let the children die where they fall? The need to write that, Scooby, so that the international court can get a better picture of all the war crimes.

Probably less than I have.

Negative. The record is mine

Lubos
Reply to  Muhammad your Prophet

What international court? The corupt one in Hague? Russians are fighting by the book. No legitimate court would take a case against Putin.

Muhammad your Prophet
Reply to  Lubos

Sooner or later they’re going to start with one monster. Who else better than a terrorist cockroach like Putin who’s deliberately targeting children’s shelters?

Hunter Biden your Pimp
Reply to  Muhammad your Prophet

MaidanISIS Ukroaches terrorists are not just war criminals, they are the most vile, evil, sick degenerate monsters in history along with their demonic masters from Washington. And you dirty shemale whore sucking their dicks for a few cents and Zelensky banana… disgusting pile of shite, that’s you.

People are not in short supply and have only a small value as labor. If a few hundred thousand big and small die, they are quickly forgotten when the next soap opera comes on TV.

TedW
Reply to  Muhammad your Prophet

Muhammad and his goat buggering descendants.

Bubbaorwell
Reply to  Muhammad your Prophet

Since when do you khazarians call yourselves Muhammad?

If they haven’t started with Blair and Bush what makes you think think they’ll start with Putin.

Uncle Sam said any attempt to try Americans in the Hague will result in the Court being liquidated.

Muhammad your Prophet
Reply to  Lubos

Going after Israel for defending itself against Hamas terrorist cockroaches was already turning the international court into a joke. Now at least it has a real excuse to go after a true mass murderer.

Destrollyer
Reply to  Muhammad your Prophet

You can keep saying the same crap, its highly likely what you are paid for… but if your masters really believe its going to work, they are dilusional.

Putin is a hero, a lightbringer in a world of darkness. He will save us from people you and your masters, as he is doing now.

squeeth
Reply to  Muhammad your Prophet

Hamas is the only democratically-elected government in the Middle East. (Good job there’s an edit button)

First, we’re going to wipe out all the jewish nazis in Ukieland.

Then we’re going to wipe out all the fake hebrews in Palestine.

Ghost of Zelensky
Reply to  Lubos

mass murderer the mianstream media but NOT Putin..

HB_norica
Reply to  Muhammad your Prophet

Good Lord no they pick up the dead children … the point of the siege is to starve the Azov Battalion not leave them delicious children. Obviously you weren’t raised on a farm … you never get rid of rats if you leave carcasses all over the place.

Hunter Biden your Pimp
Reply to  Muhammad your Prophet

How many children your Azovite boyfriends killed today for CNN cameras? Huh bitch? Not just using them as human shield and hiding behind civilians, they are deliberately killing children for dirty propaganda, just like they did in Maidan back in 2014. when their snipers killed both protesters and police officers.

TedW
Reply to  Muhammad your Prophet

Mariouzs
Reply to  Muhammad your Prophet

Oh the children! The Children!

Children die every day in Yemen and nobody gives a shit.

You think anyone cares about Ukie spawn?

BabylonGardens
Reply to  Muhammad your Prophet

The ICC is increasingly standing accused of racism. Take a look at the list of accused and prosecuted cases in last two decades, and where the accused come from. It is way disproportionate, many tin-pot African warlords, that end up easily caught by Europeans for cash rewards. So basically list of black Africans being held and prosecuted by white west Europeans, in the EU. That makes ICC look a lot like a new Neo-colonial instrument of western-EU power over Africa. That is not a credible look in southern hemisphere, and developing world.

Thats a lazy month in Palestine.

Those drones are easily detected and shot down by Ukrainian air defences. Also, good luck with making more. You have been cut off from the international market of critical military components. And it’s right to do so. Any country that traitorously threatens and attacks it’s friendly neighbors, carving up and annexing chunks of their territory, creating economic and psychological hardship for tens of millions of people, deserves the same fate. But Russia has demonstrated more. They aren’t just a bully and a thief, greedy for the land of their neighbors. They’re actually a genocidal thief. They would kill people to annex more land and they would displace millions of people to annex more land. Five millon people displaced in Ukraine, both internally and externally in three weeks. The worst humanitarian catastrophe on the territory of Europe since Nazi Germany. Only the Nazis were capable of such evils in terms of humanitarian devastation. The world is watching. Europe has become more peaceful less warlike. They have little tolerance for nuclear armed bullies. Countries needs to isolate Russia and Russia needs to feel like a failure on the diplomatic front. Because they’re are a disaster in terms of diplomacy. And that means that the Russian leadership is incapable to pursue the best interests of the Russian people. Putin is acting like a Tzar and he is treating Russian people like dumb peasants. I just hope that the Russian people refuse to be deceived by this corrupt autocrat

Now Russia seems to turn to devastation tactics, as the invasion not only has been slowed down, but is grinding to a halt right now.

Medinski was very upset when cutting the rail connections from Russia to Ukraine was mentioned by Ukrainian militaries, as lots of supplies are rolling in there. Very desperate times for Russia it seems.

If both sides are coming to terms soon we will see. One thing for sure, Russian military got the reputation of the Soviet Army in Finland these days. 🤷

It was about time to solve the Ukrainian problem.

He tried and he failed.

Yeah I was a noob. But better late then never.

The Objective
Reply to  Loki

You cant cut something you don’t control Einstein.

Loki
Reply to  The Objective

True, if Russia can’t even get the supposedly occupied areas of their invasion under control, they can’t keep the rails safe either. 🤷

The Objective
Reply to  Loki

Sure thats why 98% of Ukrop military assets are toast.

Loki
Reply to  The Objective

Interesting that they are still kicking ass then with that little equipment. 🤷

At least Russia can build drones … Ukraine has to suck NATO dick for their drones.

The USA gives NOTHING away. No matter who wins this war Ukraine is going to be someone’s bitch.

Sanctions are the same as tariff barriers that the Russians don’t have to bother with because the Seppoes have done it for them.

If you could fight as much as you talk Russia would have been defeated by now.

Pity your words are just farts in the wind …

Putin is getting real mad and grumpy , he can see he is going to have to kill himself over this lost war he started .

Canada suicide watch – Give it a call buddy, it’s all good. https://www.crisisservicescanada.ca/en/

Ah my boys are having fun. Precious 💗💕

They love being punching bags, especially the recruits. 🤷

I ate Kiev chicken for dinner. It was delicious.

I ate Biden’s diapers for dinner. It was delicious.

Did someone see my laptop? If so call 555-crackerboy

A Forpost a day keeps the ukrotrash away 🤗

Why do you bootlicking Russian schizos love to watch your evil corrupt government commit war crimes in against innocent children some of which are also Russian?

war criminals are those that keep children as shields and don’t give a fuck about their own civilians.

Why do you bootlicking CIAisis schizos love to watch your evil corrupt government commit war crimes in against innocent children some of which are also Russian?

Everyone must be treated equally. Children become like their parents when they grow up.

sod off
Reply to  Corrupt shithole of russiapisstan

Corrupt shithole of russiapisstan
Reply to  sod off

Look how strong we are! Even our shitty drones can hit something! CIAtrolls and ukrobots are crying and raging 🤗🤡

Camera resolution is terrible even Redmi Note 4 is better.

Drones are great in modern conflicts. Attack and grind but also for reconnaissance and spy on troops movement. Cost effective.