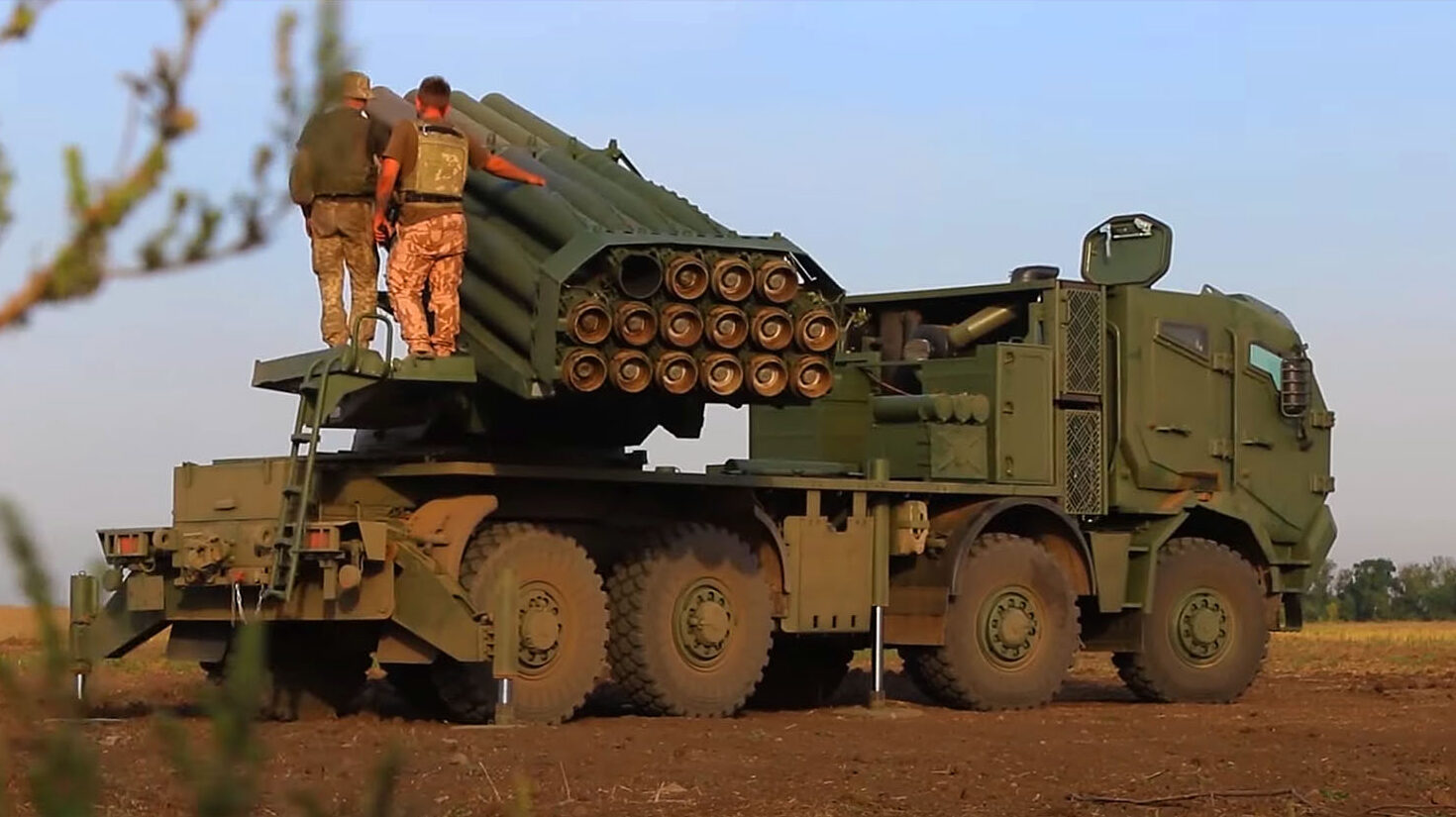 The artillery fire of the Russian military has reportedly destroyed one of Ukraine’s modern Burevia 220 mm multiple rocket launchers (MRL).

On November 18, a photo showing the wreckage of a Burevia and a destroyed Soviet-made BM-27 220 mm MRL of the Armed Forces of Ukraine (AF) surfaced online. It is still unclear where or when the photo was taken. The two launchers were reportedly destroyed in a Russian counter-artillery strike. 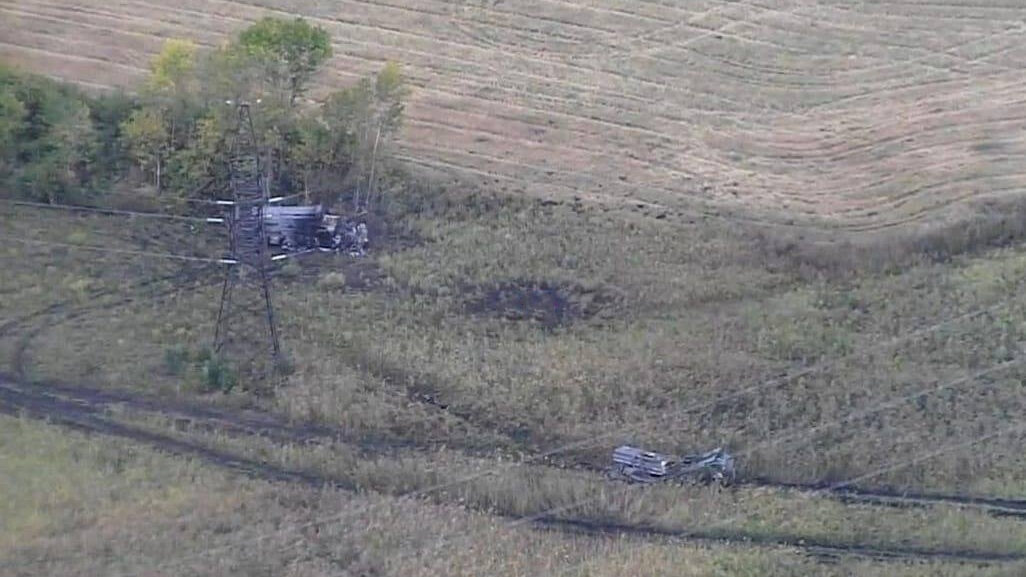 The Burevia is a Ukrainian modernized copy of the BM-27 that was developed by the Ukrainian Shepetivka Repair Plant and other defense contractors.

The heavy MRL is based on a Czech-made Tatra 8×8 T815-7T3RC1 chassis and has an armored cab. The launcher is equipped with a digital fire control system, including a battlefield information exchange system.

In addition to the available 220 mm rockets for the BM-27 MRL, like the high-explosive 9M27F, the thermobaric 9M51 and the cluster 9M27K which have an effective a range of 35 kilometers, the Burevia can launch rockets with a range of up to 65 kilometers which were developed by Yuzhnoye Design Bureau.

Prior to the start of the Russian special military operation in Ukraine, at least 70 BM-27 MRLs were in service with the AFU and very few Burevia MRLs were produced by the Shepetivka Repair Plant. In the course of the operation, many of these launchers were captured, damaged or destroyed.

Despite receiving massive support from the United States and other NATO states, including hundreds of MRLs and howitzers, the AFU is still outgunned by the Russian military.

China should deliver some state of the art drones to Russia

of course, those creeping affarist in Benjing have done nothing to help Russia, that in 1950 helped massively China vs USA.

Inquisition
Reply to  Z for Victory

Chinese is not so advanced with military equipment Russia is stronger

China has alot of Drones and rockets however.

anonymous
Reply to  Z for Victory

Are you kidding? China is the chief reason Russia can still do all imports despite sanctions. Chinese and Indian oil purchases, while beneficial for them as well, are the reason Russia has actually increased it’s net exports. China is doing a lot of work for the expansion of BRICS and SCO which are threatening to undercut the american dollar system. Yes Iran has done more for the fighting soldiers on the ground. But China are delivering in their own way. What else do you think made the americans have upp the ante on fucking with Taiwan so much?

Though it would be amazing to see the PLA send 400k troops to the Ukraine, it’s not happening, because China is still way to exposed towards USA to want to risk a hard break. Maybe they can suffer it in 5-8 years if they work on it, but a break with the west would maybe be half as bad for china as it would be for the west. Meaning that the west would starve, and china would probably face the kind of mass unemployment and social unrest the west has now…

Worse. Without the inter-dependency, Tibet, Xingyang and Taiwan would get insurgized by the West. The US Navy, weaker within the Yellow Sea but much superior in blue waters, will block all trade of China with any or almost any other nation. China can only break with its inter-dependency once it has build a sufficiently strong and battle ready blue water navy to face a full out sea warfare against the US or else it will get cut off from all trade with the rest of the world.

Absolutely hilarious. The US navy could be turned into glowing embers by China or Russia if push came to shove. Why not try a big heaping gulf of reality?

It’s not so simple. US Navy still is a very dangerous opponent. Neither Russia nor even China reach the level to surpass US Navy or USAF. And for a reason. The anglo-zioNAZI imperialism was entirely relied on ‘Her majesty Fleet’ shithole. Only US Army, clearly again for a reason..Fajoos USA being an isolated landmass from the traditional enemies it developed its military strategy accordingly. That’s because still have a lot less budget invested in that sectors. Russia can’t but with China is another matter. I think in some max. 20 years China will develop a much more superior navy than JUSA.

Yes, China is doing something, but not enough. I am aware of the economical situation and dependencies. However, a militarily weakened Russia etc. or theoretically even worse things are not in the interests of China. The Wests plan is to destroy Russia and then China is next. From the Western perspective: What Ukraine is for the Russian question, Tibet/Xingyang/Taiwan are for the Chinese question. We all know that. Before a great war against China, the West will first isolate China economically and diplomatically, then there will be seperatist insurgent actions within Tibet, Xingyang and Taiwan. China will have to respond and the West will supply weapons and/or directly send in troops, depending on the overall outlook form their perspective.

The West sending troops into mainland China isn’t a great idea. A Chinese friend told me once, “We have too many men already, accepting two million casualties in a land war is perfectly acceptable to us.”

Nobody can defeat China with ground troops. China know it, kikejoos also. The effort to subdue China will be of another sort. On a military aspect, just like someone already said here, US Navy will be put to the work.

Pertinent and correct statement. Sure that will be the following events. From that perspective alone, China must to back up Russia somehow.

CentralAsianStudies
Reply to  Z for Victory

Honestly you can’t blame them. Russia isn’t the USSR. Putin has dropped the ball many times and China doesn’t consider them as reliable as they have in the past militarily. If Russia started to push hard and get significant result, then China would consider something different perhaps China will start providing some aid under the table or over depending on how US passes them off

Take it one step further. China will benefit by a weak Russia. Where will Russia go? To the US to Europe? Nope. They have China and China has Russia now. It is far better for the Chinese to have Russia in a position that they can dictate terms in all arenas. A weekend Russia is a Russia on sale at cut rate pricing and now due to the West Russia is like Costco membership only… (to some degree) China and India are the only ones with cards right now.

That is the Western think tank cabalists narrative you re-produce here. No, that is not at all typical Chinese thinking, it is typical American thinking and to a degree certain European elites. It is a high risk game you describe, because Russia could break from a loss in Ukraine. Army destroyed, young men dead in large numbers, economically weakened, politically and otherwise internally weakend, it could fall pray to Western operations to get cut into 10 pieces, which would be a geopolitical catastrophe for China. China does not play such a short sighted, quick benefits with high risk gambit like the West does.

In China, there were a significant amount of people who liked to just replace the US, with all the bullying and exploitation of other nations, and I guess they are battle-ready for taking a large chunk of Siberia, if they “feel like it”, which could happen quickly if Russia would disintegrate and thus unable to retaliate. Please also don’t forget that China and Russia do still have “active” border conflicts in some areas. I am pretty confident that the Chinese will not sweep them under the rug, however minor, but rather use them to tell the people why they need to march to Russia. Many of China’s “elite” have been “educated” in the West, mostly in the US and UK, btw.

Without any doubt. Putin’s politic were totally inadequate for war in general and war in Ukropizdan in particular.

Joe
Reply to  Z for Victory

China is being threatened by USA and EU, they are economically dependent, despite numerical economical strength. China is diplomatically supporting Russia, but I agree that it is not enough.

China would prefer there to be a balance of power, it suits China for the U.S to have as many competitors to keep them on their toes as possible.

However China also knows that alliances can be tenuous and therefore, China’s refusal to intervene in any way against Russia is already a massive vote of support in favor of maintaining that balance.

Haven’t heard of any HIMARS attacks recently, they must have been all blown to bits by now. I guess CNN was right when they reported the West is running out of weapons and ammo.

USA is a shithole, Europe becomes one
Reply to  Assad Defeated Zionists

Unfortunatelly the Ukronazis have not run out of imbeciles eagger to use weapons for literally no real reason! This is where Russia has a lot of work to do…

Yeah they were saying that they were going to send more already, so I just noted “that’s some fast work on Russias part then.”

Because these are systems they actually would use themselves and that are comparatively hard to replace as they need to import parts and materials.

The filth of Ukrainianism must be eliminated.

The wicked “elites” of the West and their minions and lackeys must die.

SF usually likes to post only infos backed by video. So, for sure the Russians destroyed more launchers, but they 1-didnt film it, or 2-didnt publish the video (for different reasons)

Not enough. Not even near enough. Russia was extremely unprepared for what will happen in banderastan. Firstly because of the lack of real objective projections. Seems they miscalculated every single step the west and its ukronazi whore took. Russia improvised on the go, but with the price of its soldiers and the worst, with its military image.