At the end of the summer, a batch of unique multi-purpose off-road vehicles, based on the UAZ Patriot, were sent to Syria. 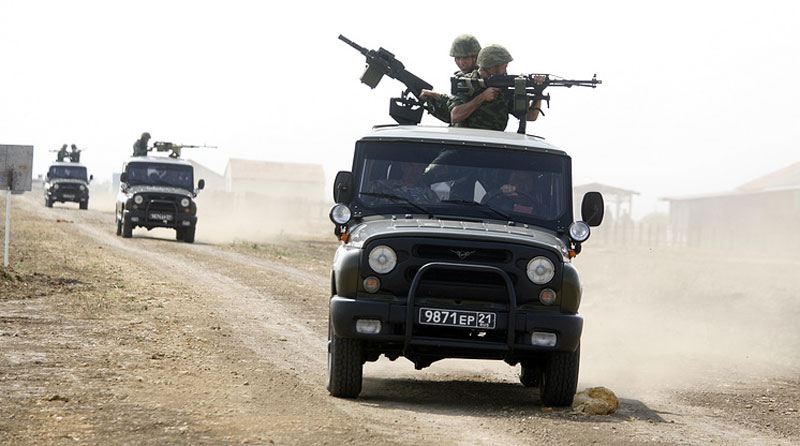 Unique multi-purpose off-road vehicles, based on the UAZ Patriot, were sent to Syria at the end of summer, a representative of the Russian Defense Ministry said.

The vehicles are used for combat raids and patrol at large distances, as well as for fighting in an urban setting. Thanks to the speed advantage it is capable to arrive quickly at the desired location and strike in advance of an enemy. According to experts, pickup trucks, equipped with machine guns, are a perfect weapon for a moving warfare in the Middle East.

As a source in the Defense Ministry told the Izvestiya newspaper, a military version of the UAZ-3163 Patriot pickup truck can be equipped with the Kord heavy machine gun and the AGS-17 automatic grenade launcher. According to the source, the vehicles have been specially revised for use in desert conditions, and have an air filtration system, a climate control and protection of the equipment against dust.

A rotating turret was installed in a bodywork, and anchors for two automatic guns and field fortification entrenching tools were installed in a cabin between seats. In addition, the vehicles are equipped with repair kits for tires, punctured by bullets.

whabt about toyota? even the US troops in syria are using toyotas. nowdays eveybody is using them. a must have item.

The Japanese have lots of work , its good to see specialized Russian equipment , plastic windshields instead of glass , kevlar floorboards , rotating turret , special clips , etc. Every small advantage in equipment quality , gives the troops the opportunity to stay focused with the job at hand.

actually the caption under the pic says gaz-3153 gusar, but nice to see the pic of the vehicle mentioned in the articel. I see it’s basically a pickup truck similar to the ubiquitous (in midle east) toyotas

You are right. I was confused by fuel tank cap on right side on your photo. It appears patriot has fuel tanks caps on both sides.

There is no need to wait for the right lane at the gas station :)

looks like Russia decided to get rid of those ones.