The Russian Army will receive soon the experimental-industrial party of 2S35 Koalitsiya-SV self-propelled artillery systems, the Russian Defense Ministry reported in a statement on its website.

“The 2S35 Koalitsiya-SV is a unique artillery system designed to eliminate artillery and mortar batteries, tanks and other armoured vehicles, anti-tank weapons, personnel, air defence and missile defence weapons, control posts, as well as field fortifications, and to deny the enemy’s reserves maneuvering behind the lines.

The self-propelled artillery weapon has unmatched specifications. In fact, it is a combat robot capable to perform fire tasks automatically, following the commands from an automated control system of tactical artillery formations.

The self-propelled weapon with ammo sets are currently being tested at the Defence Ministry’s training grounds. At the same time, traditionally, special attention is being paid to reliability and safety of the new artillery system,” the statement reads. 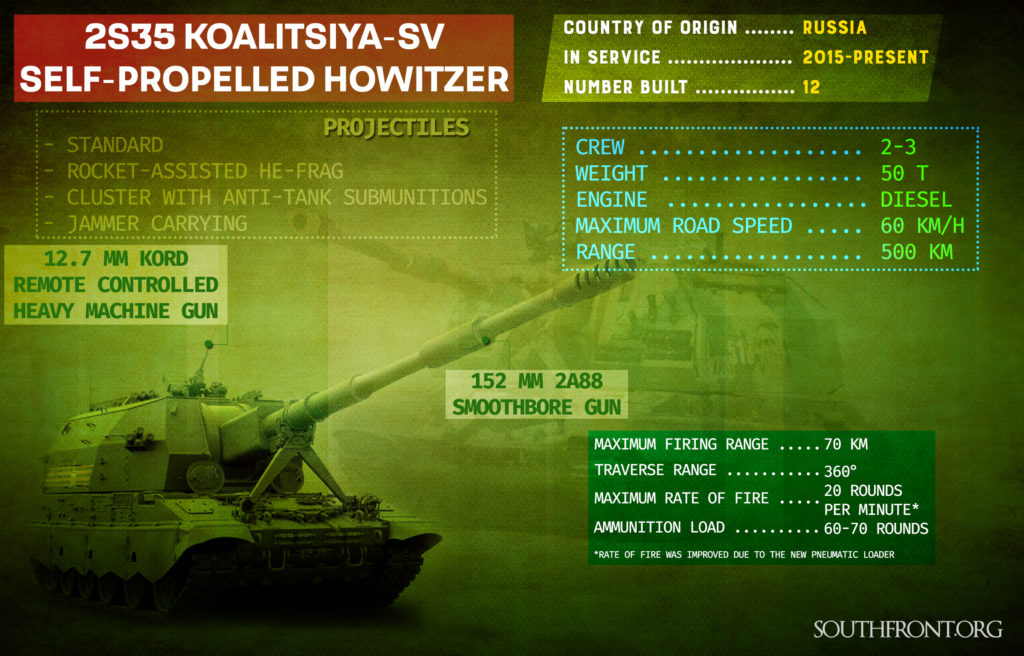 20 rounds per minute at ranges of up to 70 kms is serious firepower delivery. And being automated and having a crew of 2-3 is even more amazing. They should bring them in Syria and baptize ISIS and possibly SDF with some deadly fire.

They should baptize this weapon on the mossad and CIA cells commading IS/SDF cannon fodders(we can say both are one now).

Yes, catch a ISIS or SDF column with their Mossad and CIA handlers on the road, they would not know what hit them.

Often it find it own name by itself after some time.

And after 3 min is piece of shit.

DONT JUDGE BOOK BY ITS COVER

of course, exactly therefore they will not use 20 shots/min.

but jesus is soooo naive, …. and i can not resist to meke joke from him :)

Solomosha, we actually knew your intelect is not bright (judging by your pathetic trolling) but you seem to show us new “depths”.

There may be more than one writer on the account, following the dumb down the thread script.

Absolutely…or we have a case or personality split.

I’m not sure what to think about the MK Ultra stuff. But whatever is causing it, it is noticeable.

The last time I was in Las Vegas I attended a super soldier summit. Some of the people there had been through programs where they had months of missing time that they had no recollection of what happened during that time.

I’ve been on the receiving end of the psychotronics before, and it’s a trip, that’s for sure. It really messes with you.

RishardD, I have to say that I don’t really get your above message and reasoning behind it. Or was it just another glitch of Disqus and you were replying to another person?

A personality split is allegedly part of the process of mind control used in some special operations work. With the electronics capability that they have now to interfere with the human brain using directed energy, different types of drugs, etc. A split personality is said to be used to mind control an intelligence asset.

“Project MKUltra, also called the CIA’s mind control program, is the code name given to a program of experiments on human subjects, at times illegal, designed and undertaken by the United States Central Intelligence Agency.”

The world media reacted to this hint on the open use of psychotronic weapons by the publication of scientific experiments from the 1960‘s where electromagnetic waves were used to transmit simple sounds into the human brain. However, most of them avoided saying that since then extensive scientific research has been carried out in this area throughout the world.”

A lot of what’s being done in these mind control research and field operations programs involves highly illegal human rights violations. And a lot of the information is suppressed for “national security” reasons.

We have. One day he is celebrating the SAA efforts, one day not. Once he is against Usrahell, then again he support them. His brain only keeps the hate on Russians, because he obvisiosly served in the Warsaw pact. I suppose he is Czech, Slovak or Polak.

They would never operate independently, their carousal ammo carriages are reloaded when empty, and the whole artillery battery would be resupplied to avoid running out of ammunition.

It supposedly takes 15 minutes to reload fully after the 60-70 rounds have been expended. That’s not that bad. I think it is meant for destructive semi-accurate salvos using drone live footage, not for 2 hour long suppression fire.

Thats the SAA way. The normal procedure for that as well as many kinds of mobile artillery is to hide or at least go to another or two prepared firepossitions.

By that You also cool it some down.

Time to reload, reload ammunition vehicles follow them for any sustained firing.

15 minutes of time to the bad guys to regret, lament and confess all they sins committed against humanity? It’s totally fair and long enough, I think.

hehe, and the enemy airforce is doing nothing.

As written above I follow You in that. If they fire the long rangers and only them, it will over heatsoon.

And its only the first 1 minut, thay can fire up to 40 or less. After that it has to go down in grenade pr minute. Even with that it seemes to be a good gun.

Punishing evil from a distance of 70km? It sounds more like divine judgment in small doses. Go ahead Russia and bring good once again to Syria.

Yes, divine judgement is being readied for the axis of evil.

That’s ok Syria is using an old WW2 cannon from 1938 M30 122mm in the assault on Mayadin think the Tamahd brigade is using it.

Í didnt know that was possible. Very ineffective barrel, often only for 100 shoot and out and amatol as explosive. I thoght it was like that until T34 got from 76 mm to 86 mm.

Normally for those system they can do 20 rounds the first minute, which is very good if You are under attack. After that minute, it becomes warm an go rapidly down.

Semilar systems as well as artillery is like that.

Many smaller therefore has an extra barrel and replace the warm one.

Tha Syrian people are for experimental use. Not bad. How many free tanks is that ?

dont foeget to sell it to saudi arabia also :D

Looks like a copy of German “Pzh 2000” or Turkish “Fırtına” artillery Systems. if it has smoothbore the ammunation must be special to reach 70 km. I do not suppose it has a good accuracy at this range.

Yes, it looks like many others. But the big difference is the much better max range. US are experimenting with kinds of those too. They havnt found an ultimate one as this for production.

Well, lower then this. The experimentals work they seemes in lower levels as renewers.

I also think I see drones are better and can be cheeper. As long as Russians kill ISIS and hit now and then, they should be welcome there.

Best place to test any weapon is the battlefield. Wouldn’t be surprised if its already in Syria.