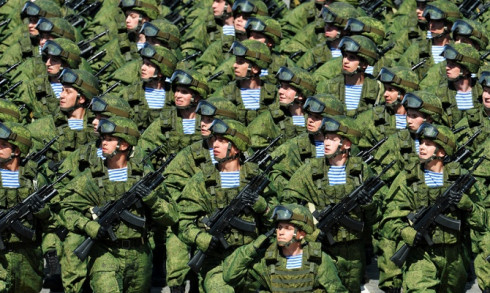 Original published by Lenta.ru; translated from Russian by J.Hawk
Minister of Defense Sergey Shoygu announced that in 2016 the Russian Ground Forces will reactivate three divisions on the Western strategic direction. The minister emphasized that it is necessary not only to form the units but also establish the required training grounds, equipment storage facilities, and housing.
In September 2015, an MOD source told Lenta.ru that the 10th Urals Volunteer Tank Division (in 2009 it was reduced to a storage and repair base). In 2013, a decision was made to return the 5th Guards Separate Motorized Rifle Brigade and the 4th Guards Separate Tank Brigade to divisional status (up to 2009 they were the 2nd Guards Tamanskaya Motorized Rifle and 4th Guards Kantemirovskaya Tank divisions).
Also in 2015, the MOD announced the deployment of two tank armies on the Western direction.
Military experts queried by Lenta.ru believe that in 2014-2015 Russia adopted a new organizational model which includes re-establishing the divisional level in the Western part of the country. This is due to the problems uncovered during training exercises with the “new model” brigades that could one day face NATO forces.
The decision to reform tank and motorized rifle divisions into more compact full-strength brigades was made in 2009 as part of military reforms. The decision was motivated by the desire to increase the mobility and combat readiness of the units, and to eliminate so-called “cadre” divisions (which were essentially equipment storage facilities with greatly reduced personnel strength, limited mainly to officers) which would become full-strength units upon mobilization.

JESUS! Two tank armies! And I figured divisions were a thing of the past.