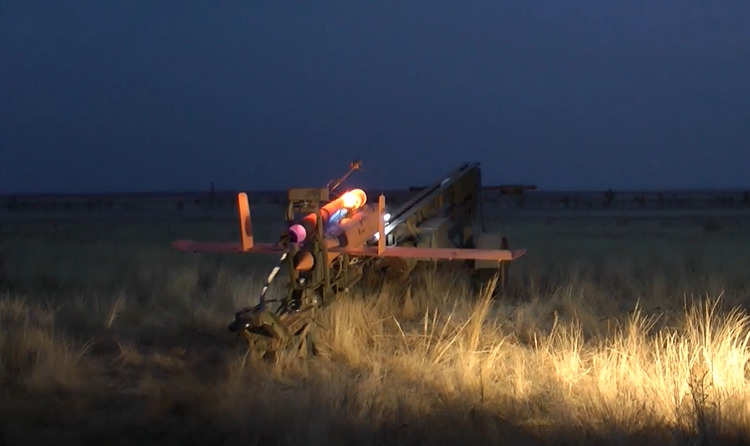 The Russian military has been actively using aerial targets as decoys to test and trick the air defense forces of Ukraine.

On March 2, Ukrainian forces shared footage showing what they claimed to be a Russian “drone” that was shot down by their air defenses. However, the object was in fact an E95M aerial target.

The E95M was developed by Russia’s Eniks to provide combat training for troops as well as to test air defense systems. The target simulates maneuverable targets such as unmanned aerial vehicles, glided guided aerial bombs, cruise missiles as well as fighter jets and helicopters.

The aerial target has an operating range of a 50 kilometers and can be equipped with Luneberg lens, corner radar reflector, pyro tracers or infrared traps.

The Russian use of aerial target like the E95M as decoys explains the countless false shot down claims which were made by Ukrainian forces since the start of the Russian special military operation in the country on February 24. For example, on February 27 Kiev falsely claimed downing two Russian Il-76 transport planes.

According to recent reports, the Russian military is currently preparing to expand the use of aerial decoys against the air defense forces of Ukraine by employing unmanned An-2 biplane planes. A similar tactic was successfully used by the Azerbaijani military against Armenian air defenses during the 2020 Nagorno-Karabakh war.

The use of aerial decoys is not only meant to deplete Ukrainian air defense forces, but also to expose their locations and means in order to destroy them with precision fire from a stand-off distance.

As of March 3, the Russian military claims to have destroyed 39 S-300, Buk-M1 and Osa anti-aircraft missile systems as well as 52 radar stations of Ukrainian forces.

Zelensky and Klitschko both make Tic Tok videos claiming they are fighting on frontline but you never see them take photos outside.

Quit begging NATO for help. You got yourself into this mess. Surrender and you can have your country back. Crimea is Russian. Stop attacking Donetsck and Lugansk. No Nato Forces on Russian Border. Stick to Minsk agreement.

They are visiting the brothel-front in Kiew.

The Beggars of the planet the chithole of Europe aka Ukropisstan.

When Russia gets complete control over Ukraine, I think they should increase their demands, not just Minsk agreement.

When this is over, there will be no need for any accord. I would not be surprised to see a new constitution.

i quite like watching him beg for help….. schadefruede

“…you can have your country back…” It would be extremely stupid for Russia to have suffered all this sanctions, international condemnation (hypocritical or not) and casualties/damage only to give the country right back to the same nato/nazi gang. It would be a slap in the face of the russians who would have died pratically in vain. All western media have already accused of Russia of everything (from genocide to annexing the country), and don’t intend to back down on that, nor will the sanctions go away anytime soon, they’re out of ammo now. Honestly, if Putin does something so stupid as that, he deserves to be deposed for incompetency and treason . Ukraine has many valuable resources (both natural and industry/potential), it also has huge agricultural potential to help turn Russia into the food superpower it is predicted to become.

The best outcome would be to install a 100% prorussian goverment, and start a campaign of economic recovery and “cultural russification” by the end of that (say 2030) add Ukraine into the Union State of Russia and Belarus and “restore” Kievan Rus’.

The current leaderships in Russia is incompetent. Regardless of annexing the whole Ukraine or not, Russia have lost. The US have achieved their objectives.

I don’t know about you people but I’ve been fooled many times in my life. I would never trust anyone who can’t keep their promises, let alone breaking written agreements. I was a fool but obviously you Russians haven’t learned anything after so many lessons so you still are fools. Keep being dumb and you will perish soon.

Ukropistan must be really low on SAMs. They probably have 2-3 launchers left in Kiev and another 2-3 in Lvov.

Due to the exhausted credibility of western media and insane censorship, I am forced to watch only their media. Every single person I know doesn’t trust western media not a dine, and since the only information we get are theirs, we believe the opposite of their reports, posts, and articles. And remember one thing people of Russia, Ukraine, Syria, Libya, Iran, Iraq, Serbia, Bosnia, Afghanistan and every other country that tasted USA democracy, PEOPLE OF US DON’T BELIEVE IN THIS CRAP OUR MSM ARE THROWING ON US. Please don’t ever forget that. At least you have a chance to defend from the US government and the deep state. We, ordinary people of the US, are in this hell also, and we don’t even have a chance defending our free speech, or our family values. We cant even defend our family values versus this degenerate pedophile, transgender, sex fluid sickoos. I just hope all of your brave people will win in your fight for freedom and dignity. But remmember also, people from europe are that lazy to look for real informations becouse they dont care if civilians are killed by Azov nazi (u can google Azov and see nazi flags and marks). Fashism and Nacism never stopped to exist in western EU, you can ask every single immigrant from all around the world (from Doctors, engineers, ITs, to simple labor workers). It is time that someone strong enough finally stands in defense of normal, family values. We in US knew it will be Russia, one way or another. We are really sorry for all the dead and injured in this process, but you gave us a glimpse of hope that this CAN BE CHANGED. Unite and endure this fight, cause if you win our fronts, we in the US will fight next. GLORY TO FREEDOM, GLORY TO FAMILY

Russia is writing a new playbook on warfare

It’s good to see Russia using drone warfare. It’s really the most economical and wears the enemy down by overwhelming force.

Looking forward to seeing those loitering-munitions in action!

Haha baiting’em with ole el cheapo buzz-bombs. Would love to get hands on that pulsejet engine ta play with.