On November 12, a vehicle of the Russian Military Police was struck with an improvised explosive device (IED) while passing on a road linking the towns of al-Musayfrah and al-Sahoah in the eastern Daraa countryside.

According to several local sources, the vehicle was on its way back from the town of Karak, where Syrian government forces conducted a security operation. The Russian Military Police were supporting the operation. 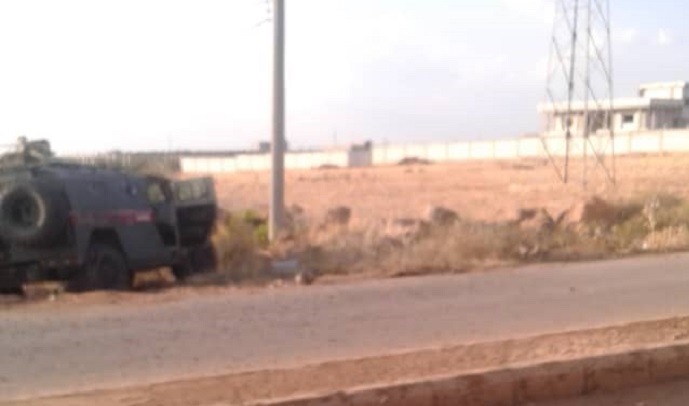 No Russian service members were killed or injured in the attack. Syrian security forces arrested several suspected. However, they were quickly released.

So far, no group has claimed responsibility for the attack. Nevertheless, ISIS, whose cells are active in eastern Daraa, remains the main suspect.

This was the third such attack on Russian forces in Daraa. On July 13 of 2019, an IED struck a vehicle of the Russian military police in eastern Daraa. On October 11 of the same year, another IED attack targeted a joint patrol of Syrian security forces and the Russian Military Police in the western part of the governorate.

Good to know nobody died. Military equipment working as intended. But knowing who dangerous some parts of Syria still are, they should add even more protection to those kinds of vehicles even more.

They dont have people for that protection. The incidents says something is wrong with Assads.

Your answer says something is wrong with your head :)

I lay 200 eggs a year. I feel released several times a weel.

I was hoping that Jens would ‘do the decent thing’ and join the Danish Minks in a mass grave.

At least the minks have the knowledge that their tortured lives in captivity will NOT adorn the shoulders of people with too much money and NO decency.

Thank God. Russian gear is sturdy. Payback is coming tho…

Payback dont solve anything. How many years of payback.

They might be right changes are needed and one could be moving Assads to be normal persons.

Assad is the normal person. You the isis supporter… Got that? Good ?

You only know black and white.

Such normal persons are in jail here or shoud be.

Shouldnt you be at a beheading at your local isis club in Kopenhagen…?

Then let’s see Assad rule Syria like before. He’ll certainly go even if this war takes 30 years. Russia will waste enormous resources in Syria, but it’ll finally give into the people’s demand for democracy.

You can do better than that Shlomo… Better luck next time…

No Soldiers killed or injured,THIS TIME,are they waiting for them to be killed?

I know single persons can do it. I think happenings are too often.

The maps should be adjusted. Assads has no 24/7 cintrol.

It seemes also only to be military control.

Stribes on the maps for main control or dots for incidents.

You’re right Jens, the maps should be adjusted, they should show Russia controlling 40% of Quneitra, Assad 40%, and Iran 20%, and then they should show Russia controlling 30% of Daraa, Assad 30%, and Iran 40%, and As Suwayda Russia controlling 40% Assad, 40% Iran 5%, and the rest a lot of Druze that are getting angrier and angrier. All your dreams might be close to coming true Jens, if the south of Syria erupts in rebelion 2.0 the only places still called Syria on any future maps will be most of Latakia, Rif Dimashq, Hama and Homs, all the rest will go to your mate Erdogan, the Arab league, and the LGBTQI stooge Biden.

Thank You. Thats how I feel it is too even Im not in Your detailed level.

Yuour predictions for the future is terrible. I kind of hope Assads and friends will collapse and some else can be made.

I have written many times Syria is a too artificial state mainly made for Kirkuk and France having Lebanon as Colony. But so many here insist in, that Neocolonialisme should remain.

My fokus has been the northern part and I have prosed the old dividing back, which is made in 1856 making parts of Turkey into small emirates named Aleppo, Raqqa and Diabykir.

Russians has solved nothing and USA, France and UK not as well.

But if your friends take over the country it won’t be any better, it’ll get much worse. The Muslim Brotherhood [MB] is the political group that will take over if Assad loses control of Syria, and the MB keep saying the Alawites are sub human, the Druze should be persecuted, and all non Muslims will be treated as parihas, and what about the Kurds, they won’t get treated any more fairly by the MB. The people that you want to take power have already told us what’s going to happen, a total slaughter, so how is that any better than what Assad has to offer. Alawites and Druze hanging from lamp posts isn’t a better Syria Jens, just a better Syria for the Islamic fanatics who like using religion as a tool/weapon.

Worst case predictions like Ypur proposal makes me feel bad. The alternatives for Syria and conntected are not Islamist or Assads.

Thats the THREAT made by rulers to KEEP their dirty powerplay.

The main reason for the Islamisme spread out in fx Syria today is, thats the only alternarive structure. Those are the only opposition, because most of them are not – by belief – not afraid to die.

The only other structure is the classic, simple and strong one by Marxisme.

But thats not normal according to parlamentarisme. A parlament is made to make wider and better solutions – partle is talk, debate and even nasty drawings. Its not 2 – 3 groups using the hammer against each other but a unification. Its not a tribe thing as well.

Its the place, where You renew the country and there actually are alternative Leaders and Leaderships, which any time can take over if needed. Not even they exist in the Baathist party, Its so ind´fected. Even the generals almost are private armies.

I ahve never told Johadists are my friends. Their friends mainly are Assads dont work well and has showed it for decades.

I feel fine about the SDFs. They are the only ones in the whole Syria, which has real and realistic plans for their SDF accoording sober education and education for women and women can live as singes and has to be in peace all over as men. Bythat men are raised bad and has to be changes too.

…And those, which 4 countries dont like, actually hardly has any JOhadists inside them uness they are in prison camps. So if they were not blocked by Assad and Turks and got somenneded help and by that 2 million refugees back, THEY could show another system then Assads and Jihadisme works.

The SDF intensions for “their part” is just like Ours in Denmark. Locals has vital influence on local matters and 50% of the tax is to local governess and never reach Copenhagen.

The locals know what they need much better in most aspect. Syria not even has a system like that but primitive counties with no teaths. Thats why Syria and others can devellop themlself part from commas. We also by local control keep corription low and are number one in that – We do have corruption.

By that its also easier to be Governess for less much better.

Syria and other semilars think Parlamentarisme is Anarcby because there is no responsability connected to their traditions and vocabulary. Our freedom by that is to choose for real more often. None just decide and pay for some school or home for the Methusalems from Copenhagen. They sometimes give some extra money and we have to ask and they can say: Thats none of Our business – and do.

But by that we can take in and implement private as well as public actvities and spreead them out.

And most of the other world is not the Muslims Brotherhood and where are the Sisters?

So You can take good parts from outside Syria and the dark areas for Islam and implement them in local versions. Parts are a trade. You might get 7 bananas for 2 apples but that can be much better. You instead of growing 40 hektars giving 10 times back can grow 10 hektars givin 40 times back as here. And You save a lot of water, fertilizer an work.

Finally many of the Jihadist mercenairis are made by desperate ones having no jobs. Number one for any Goverment should be to give those people useful work or education. It did not happen i Syria. All money has gone by the private owners named as Baathists and not for sensible investments – even in oil and gas.

Before the war started the opposition groups had a venue for expressing their views and their will, that venue was free and fair elections, that was the appropriate way to change leadership or the countries political direction, not at the point of a gun, especially one the Saudis, Turks, Americans, Israelis and others provided.

All those terrorist came from at tanf area, many disguise as saa, closing at tanf and blasting isis remain in central syria surely will end most of this trouble

You already have the link SF so kindly provided us so use it like I did.