On September 1, two Tu-142MK maritime reconnaissance and anti-submarine warfare (ASW) aircraft of the Russian Naval Aviation were deployed at the Hmeimim airbase in the western Syrian governorate of Lattakia, according to Syrian pro-government activists. The two aircraft were reportedly escorted by Su-35 warplanes.

The Tu-142MK has a combat radius of 6,500km and can fly as high as 12km. The maritime reconnaissance and ASW aircraft can be also armed with different types of torpedoes, bombs and anti-ship missiles, such as the advance Kh-35.

The two aircraft are expected to participate in the ongoing drills of the Russian Navy in the Mediterranean Sea, off the coast of Syria, which will end on September 8. According to the Ministry of Defense of Russia, 25 warships led by the Marshal Ustinov missile cruiser and 30 aircraft, including the strategic Tu-160 missile-carrying bombers are participating in the drills.

Local observers believe that the drills are a response to the U.S. and its allies, which have threatened to carry out a new missile strikes on positions of the Damascus government. Russia has warned that the militants in northern Syria may stage a chemical attack to serve as a pretext for the new strike.

So two 142s and two Su35s? Small but significant addition, they will be tracking Med or Gulf USN or RN subs I suppose.

The number of the Su35 escort was not given in the article,”The two aircrafts were reportedly escorted by Su-35 warplanes”.

You can call me Al
Reply to  George King

I read your comment and for a moment I was going to give a smart arsed answer, but I read the article again and you are absolutely right. Strangely enough, both BMW and myself have been caught “inferring”. Thanks for the heads up….

Two ASW specialized reconnaissance aircraft already plenty to sweep the Mediterranean sea at the range where they can fire their cruise missile. Ballistic missiles can have greater range but said weapons unsuitable for attacking area effectively covered by the long range radar S400 specifically made to defeat them.

In any cases there’s not much place submarine can keep in hiding and it just can’t run away faster than airborne vehicles after they surface to strike target.

AM Hants
Reply to  as

Reminds me of these two stories:

Do you not think that this crisis is hotting up now ?; I am talking beyond anything else that has happened !!. Anyway, are you up for a few drinks + food this week ?.

Yeah food & Drink seems like a good Idea let me know when you have the time…The Choice will be up to the Anglo-ZioNazis…. they can Chose the way they want to play the Game… Exactly how it Should be…because the Empire is the One that should start a Potential War…

Utrecht – Irish bar – 8-00pm Thursday if OK,if not, let me know. I’ll be on the train, so a few directions to the bar would be good.

Well come on then; nothing is stopping you.

mmm… al. call me and I am on Yandex….. that isn’t difficult I hope.

I tried to open a Yandex A/C but Google and Microsoft blocked it . I have skype but rarely use it. Same name.

Send an email to me. Look at my comment again and send email from your google or whatever.

I got it, thanks.

Advocaat Jan boone (Dutch) is Fighting the Catholic Church at the moment for Child Abuse and wants the Vatican marked as a Criminal Organisation…. Sorry Only a Dutch Version Available….bye bye Kiddie-fucker Pope Francis….Babylon is Bound to Fall

Well so now the Syrian Arab army can start working on brooming at idlib and cleaning up from rats.

And Godspeed to the heroes of the SAA and allies!
Crush the Al-Queda infestation for all human civilisation.

The question is: is the message getting through the incredibly thick expansionist skulls of the US Empire and its slaves?
Will the penny only drop when the Russian missiles drop on the invaders?
I hope the live fire exercises close to the US Borg Empire’s subs and tubs will be enough, or this is exactly how WW3 starts.

Oh, it’s getting through, otherwise the missiles would have already flown. Time for plan B 37&1/2.

as
Reply to  VeeNarian (Yerevan)

It did. Wait for it their media or congressional blow up something of insignificant nature along the line that FUKUS can’t be cowed by big bad Russian setting up unbackable precedence to their psychopathic bully behavior. Then we’ll know they definitely gonna strike albeit either with face saving goal or dangerous double down.
So far their media haven’t act up too much regarding this so not now.

I recently read that Russia has deployed an anti-submarine smart bomb on its ASW aircraft (most likely fixed wing, not rotary), able to engage moving, stopped or surfaced subs.

Such system would be a rather new concept, although no info exist on the engagement cycle, it has the potential to increase the efficiency of land based ASW airplanes dramatically.

Tis time to test one on a FUKUS sub John :)

What a great sight in skies! 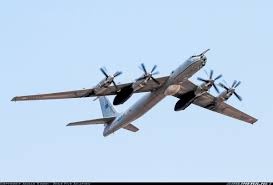 Tips of its propeller blades are supersonic, and sonic boom is pretty loud. :)
Also, big planes are loud in general, and this one is pretty big. :)

Good one :) And I like your avatar – so many lies about him but when they recently held a poll “Face of Russia” (regarding who was the greatest person in history of Russian state) – Stalin won. Deep inside Russians feel who did best for them and liberast lies can’t change it.

Koba was the right man at the right place at the right time. George Washington also had his version of Order 227. Vissarionivich cracked many eggs to make his omelets, but if he had failed there would be no farm, no chickens and no free people to eat them. On a smaller scale Assad is the same.