On June 2, ISIS announced a new attack on the Syrian Arab Army (SAA) positions south of Deir Ezzor. However, SAA troops in the city and the airport managed to repel the ISIS attacks and the terrorist group failed to capture any point.

Clashes are still ongoing in the Panorama area, the Syriatel hill and the Umm Abboud hill.

Also the SAA artillery targeted ISIS fighters in Al-Mayadeen Kow’ and the vicinity of the panorama area. According to opposition sources, US-led coalition warplanes targeted ISIS positions in the oil fields of Ward, Tanak and Omar.

From its side, ISIS continued to target civilians in Deir Ezzor city. Two people lost their life as a result of the ISIS shelling Al-Joura district with mortars.

The Deir Ezzor province is witnessing poor humanitarian conditions as a result of heavy airstrikes by US-led coalition warplanes on Al-Mayadeen and A-Bukmal, as well as the severe shortage of food and medicine due to the ISIS siege of the provincial capital.

Very good job do what must be done SAA, do not hesitate, SHOW NO MERCY!!

Reading this article and earlier ones on DeZ, one wonders what is happening there. All those tales on heroic stances, advances by SAA, etc etc, still the lines remain the same, with IS now reported as gaining a little bit, widening the gap between the two besieged parts of the city.

What is needed is outside forces to break the siege, whether SAA from Hassakah, SAA from Palmyra, FSA from jordan of PMU from Iraq or even SDF from the north.

Get the civilians free.

The FSA,,the SDF, the USSA, and Saudi Judea Arabia and the Kurds are following their master Israel’s orders to help ISIS to bring in large reinforcements take Deir AZUR

Love the Cammo on the Hilux. 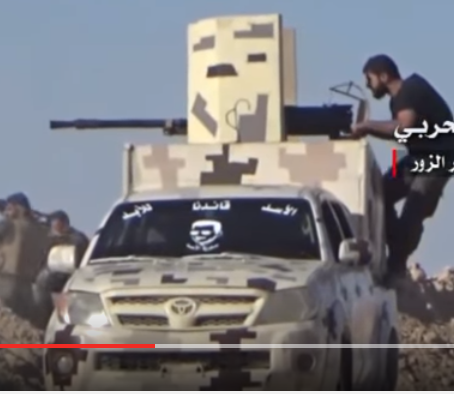