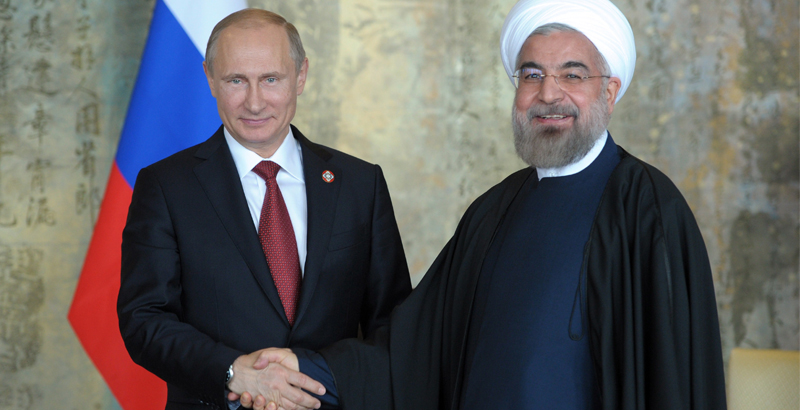 Russian President Vladimir Putin (L) shakes with his Iran’s counterpart Hassan Rouhani (R) during their bilateral meeting on the sidelines of the fourth Conference on Interaction and Confidence Building Measures in Asia (CICA) summit in Shanghai on May 21, 2014 (Photo: AFP / Getty Images / Alexey Druzhinin)

Iranian President Hassan Rouhani is going to pay an official visit to Russia on March 27-28, the RIA Novosti news agency reported, citing the Kremlin’s press service. Reportedly, during his meeting with Russian President Vladimir Putin on March 28, joint projects of the two countries in the field of transport infrastructure and energetics will be discussed.

“On March 27-28, 2017, President of the Islamic Republic of Iran Hassan Rouhani will pay an official visit to Russia on the invitation of Russian President Vladimir Putin,” a statement of the press service reads.

As it was reported, the entire complex of issues of the Russian-Iranian cooperation is planned to be considered during the negotiations of the states’ heads.

“Special attention is expected to be given to the prospects of expanding trade, economic and investment ties, including in the context of implementing major joint projects in energetics and transport infrastructure,” the press release added.

It also was noted that Putin and Rouhani will continue to exchange of their opinions on topical issues of the world and regional agenda. In addition, according to the Kremlin’s press service, a number of bilateral documents will be signed following the results of the talks.

On March 9, the Russian President had a meeting with Israeli Prime Minister Benjamin Netanyahu. On March 10, there was a meeting between Putin and Turkish President Recep Tayyip Erdogan. Apparentely, after finding out the opponents’ positions, the allies are going to agree on a further strategy in the region on March 28.

If Rouhani and Putin do not see that the Americans are about to seize Deir Azzor , which together with Raqqa will be the creation of “Sunnistan” . If they allow this to happen , Iran and Iraq will be cut off from Syria and Lebanon , they will eventually lose in Syria .

In Sumo , you are on the mat , or off , There is no half way . One foot off the mat is a game over . America is a big Sumo opponent . It can be beaten , but only with focused intent .

Have you even looked at a map lately???

It is wonderful to see SAA kicking jihadist ass in Homs , Palmyra and Aleppo . But I suggest you look at a map . We know the US (Kurds) are positioned for Raqqa , which whatever the cost , they will take . If Deir Azzor is plucked ( like the damm ) , together with Raqqa , they have their “Sunnistan” or as the Rand Corp. called it an “International Administration Zone” , “held to bring security” ( oil ) . That little country is the keystone in the Shia Cresent . Without it Iran and Iraq are cut off from Syria and Lebanon . I like the Kurds , but with America backing them , they become unreliable.

And exactly where do you think all the Jihadists will move if this happens??. To Deir Izzor! This area will become the focal point of the war. The Syrian Army will not give up it’s strongholds and the Jihadists will turn the war into an anti-American struggle. This could become a complete goat-fuck for the Americans. Throw in the Iranians , Hezbollah and Russians and Turks and it’s a mega goat fuck. Al Qaeda in it’s various guises is still the numerically largest force in Syria. My guess is the Americans will cause this goat fuck then run off as fast as possible.So strategically it’s a bad idea.

This is an anti-American struggle . The Syrians have been fighting the US financed and armed jihadist “rebels” for six years now . The Saudi’s , and Turks are the US boots on the ground , Wahhabi Sunni Islamist’s . They go by various names , ISIS , Al Qaeda , Al Nusra , they are claimed to be “moderate rebels” , but there is nothing moderate about them , and they are rebels in name only , they are not Syrian but multi-national , all though 80 % are Saudi and Tunisian . Lebanon ( Hezbollah ) , Syria (Syrian Arab Army) , Iran ( militias ) , and Russia are all allied against these jihadists . America “claims” to be fighting ISIS , but that is just for PR on the international stage. The Americans did cause this “mega goat fuck” , and their “interest” is the oil fields . Like in Iraq , they are not planning on leaving .

Ok I fully agree with you on the point that the Wahabbis are Saudi and Turkish funded and trained and equipped with US money and equipment.This is a US plan that has already backfired. However there’s very poor oil resources in Syria. Most of it is very thick with sulphites and tar. Probably phosphates would be a better American excuse for a resource war. To me it seems like the US is trying to cover up truths about it’s involvement with the Jihadis hence it’s on the ground in Syria. The mix of Sunni and Kurdish SDF forces it depends on are dubious allies at best. The Kurds don’t trust the US for reasons dating back to 1991 and have one eye and more guns aimed at the Turks who are a pain in the ass. As for the Sunnis , they are hired guns who would join Al Qaeda or Isis dependant on who paid more to kill Americans. So the US is backing a failed plan already. If the Turks attacked the Kurds and the Sunnis went Wahabbi , the Americans would be in deep shit. It seems poorly thought out and unreliable at best. A large US presence could see Sunni forces joining up into a super Jihadi group to kill Americans and whoever else they please.The Russians are playing it smart and reaching out to the Kurds , if Turkey attacks the Kurds, the US is stumped. As with Afghanistan and Iraq , the US military is a big Turkey in Syria with it’s head in the sand and ass up in the air.

Paulo : Liked your last sentence best , and your right , it is a failed policy , but they have not stopped following it , as they are going for the long run . Iran is the long run , To weaken Syria , Iraq and Lebanon to the point where they will not be able to offer Iran viable military help when they attack Iran . Syria has large off shore oil and gas reserves , and tons under the Israeli occupied Golan Heights . That is the real reason for the war , if Syria is fractured , they would lose legal claim to the Golan Heights , and the three hundred meter thick oil strata beneath it ( estimated to equal Saudi Arabia’s ) Existing production kept Syria debt free up until the war started in 2011 , so its not without merit . Syrian Sunnis make up 60 % of the SAA , and they have seen first hand the brutality of the Wahhabi and Salafist Sunnis , and are not going to join them , they have wives and children . Personally , I would not be surprised if the US uses the Kurds to fracture Turkey as well , with Erdogan the mad man , they have an excuse , and cover even more of Iran’s border .

Erdogan wanted to implement his dictator rule in Astana meeting or else his terrorist will continue fighting.The true terrorist fighters Are SAA,Tiger fighters,Hezbollah,Kurdish,Iran and Russians.Not Israel and Turkey.If Nato kicks out Turkey Russia shouldn’t partner Turkey because Erdogan will send terrorist to Russia as it wants it through fake tourism propaganda.

I’ve read this too in an Israeli website, let’s hope it ain’t true :( Ps Greece did something similar 2 years ago, they had a joint training course with Israel and they let them Lock and study the S-300 brigade stationed in Crete.

Zionist criminals are the biggest threat to the region and humanity.

I am sure the President of Iran will be needing to ask Putin in person why Russia either gave the Syrian air defense codes to Israel, or why Russia knew that Israel stole the codes yet Russia refused to change the AA codes for Syria. And why Iranians had to go to Syria to help the people change the codes so they could finally lock onto the invading Israels who are bombing their country into shreds weekly.

According to the report, much remains unknown about Israel’s attack on a Hezbollah weapons convoy and the Syrian response to the Israeli fighter jets early Friday morning. Israel has reportedly attacked dozens of times in Syrian territory since Hezbollah joined the Syrian civil war in 2012, but Friday marked the first time that an anti-aircraft missile had been fired at an IAF jet.

Al-Jarida’s Tehran correspondent, Farzad Qassemi, cited a source in the Iranian Defense Ministry as saying that Iranian experts had changed the operation codes for the Syrian air defense system, which is what enabled the anti-aircraft missiles to be used against the Israeli Air Force on Friday morning.

According to the source, Damascus and Tehran “were shocked” every time the Russian-made air defense system did not work to defend Syria’s airspace, or even give notification that the air space had been penetrated in order to evacuate outposts prior to the airstrike. The systems are supposed to identify the takeoff of Israeli Air Force jets from their bases because of the small distance between the countries and is even supposed to attempt to target the planes and any missiles that are fired from them.

According to the source, the Iranians and the Syrians suspected that Russia gave the codes for the air defense system to Israel and even refused the requests of Tehran and Damascus to check the codes. “Iran has the ability today to change the Russian security codes since it received the advanced Russian S-300,” the source added. “This came after it received reports that Israel got the operation codes for the missile system. In Iran, they even expanded their knowledge when they built the Bavar-373 air defense system – which is a domestic copy of the Russian S-300 – in order that the systems would work together during an attack.”

According to the source, three weeks ago, during Iranian military maneuvers, Iranian engineers hacked into the codes of the S-300, but when the Bavar-373 was not working in conjunction with the Russian air defense system the experiment was suspended.

The source said further that the Iranian Defense Ministry sent several engineers to Syria to change the codes of the air defense system that was under the control of the Syrian army, without Moscow’s knowledge. “They succeeded in changing some of the codes last month and therefore when the Israel fighter jets took off from their bases – the air defense system succeeded in identifying them and firing interceptor missiles at them and at the missiles they had launched.”

The source added that “the Syrian radar treated Israeli fighter jets as friendly planes in the past and not as enemy planes, which proves that Israel knew the codes of the missile system.”

According to the source, the identification of the Israeli fighter jets taking off enabled Hezbollah to evacuate the outpost and even to launch a missile toward the military base from which the fighter jets had taken off. “The missile launched by Hezbollah toward Israel was worth some $2,000, whereas the missiles used by Israel to intercept it were worth some $3 million,” the source added.

The Iranian source said further that in a report sent to the Russian military command, the Russians were asked if someone penetrated the Syrian air defense system. Both the Iranians and Syrians were awaiting an answer. SOURCE: http://www.jpost.com/Arab-Israeli-Conflict/Report-Iran-accuses-Russia-of-giving-Israel-codes-for-Syrian-air-defenses-484777