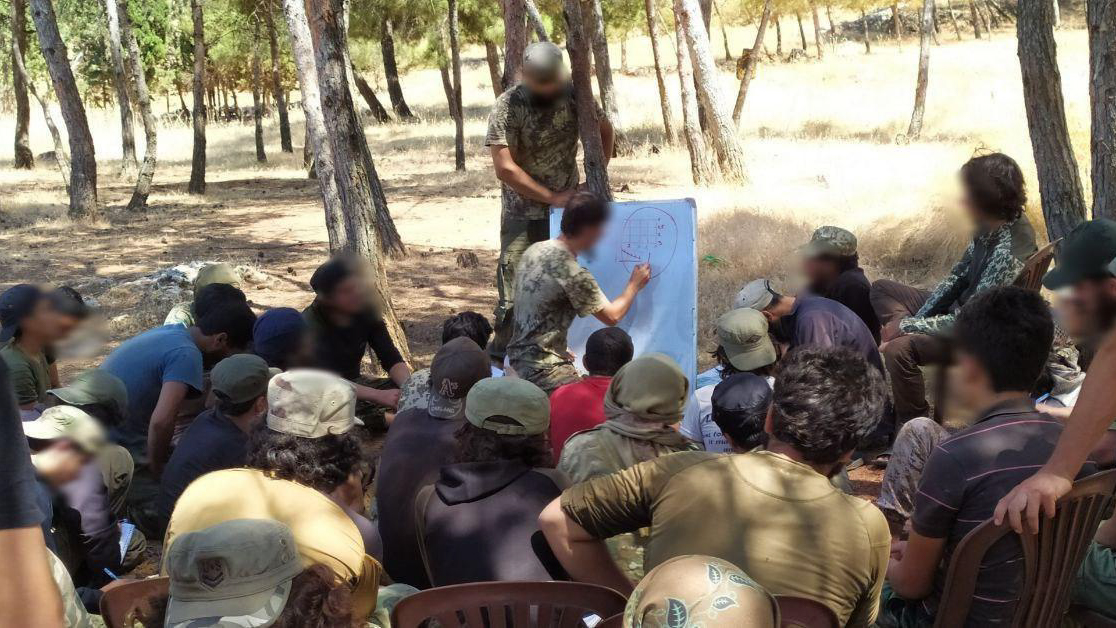 A Russian airstrike has wiped out a headquarters of so called Malhama Tactical, a group of Jihadi mercenaries, in Greater Idlib, Fadi Hussien, an Islamist armed groups researcher, revealed on July 25.

“The airstrike resulted in no casualties, it caused material losses,” Hussien wrote on Twitter.

Regarded as the “Islamic Blackwater,” Malhama Tactical was founded in 2015 by a Uzbeki jihadist called Abu Rofiq. The group, which operates in Greater Idlib, has very few members that are estimated at no more than ten by some sources.

According to several opposition sources, Malhama Tactical planed the recent attack on the town of al-Hamameyat in northern Hama, which was carried out by HTS and its allies. The attack was a major failure with the terrorist groups losing more than 70 fighters.

The successful airstrike on Malhama Tactical’s headquarters indicates that pro-government forces are now hunting the terrorist group that manged to survive for many years with minimum losses.

These “lonely” airstrikes are worthless.period.

just prooves that Putin is a Zionist treacherous pig!

for months now…. how else to explain……with supposed russian airforce “helping” SAA…not a foot of Idlib was taken back..to the contrary…the Islamist whores are stronger than ever..recieving state of the art weaponry fron Putins Partner erdogan.thats a fucking fact!

AM Hants
Reply to  klove and light

‘… They told a story, they told a lie, and the public opinion around the world and in the West didn’t buy their story, but they couldn’t withdraw. So, they had to do something, even on a smaller scale,” Assad said, referring to the joint airstrikes against purported Syrian chemical weapons facilities, carried out on April 14 by the US, UK, and France…

…‘Russia deterred larger-scale attack on Syria’ “The Russians announced publicly that they are going to destroy the bases that are going to be used to launch missiles, and our information – we don’t have evidence, we only have information, and that information is credible information – that they were thinking about a comprehensive attack all over Syria, and that’s why the threat pushed the West to make it on a much smaller scale,” the Syrian president said.

BMWA1
Reply to  AM Hants

AM Hants
Reply to  BMWA1

The words of President Assad. Cannot take the credit haha. Wish him and his family well. Together with the people of Syria.

George King
Reply to  AM Hants

Very well said and correct “they are going to destroy the bases that are going to be used to launch missiles” of course we are talking about any US or alliance ship as well as land based launch. Russia has shown Iran the move on the chess board that is a counter that can’t be checked. Iran can reach and has said so all US bases in the area including Israeli. If I can add one more element the Russians did not have present is a very large ground force and allies that can’t be countered even with a year build up of allied forces in the ME. The navy carriers and escorts are sitting in a very small body of water with no escape from missile and torpedo range.

Turkey informed prior to attack Erdogan warned his terrorists only material damage.Turkey will replace weapons. The show goes on.

I bet it was a hospital or school the Russians bombed .

Nah, you’re confusing the RF with the US, the ones that specialize in hospitals and weddings….

AM Hants
Reply to  Paulskiy

Not forgetting funerals as well, or was that their good mates over in Saudi?

Icarus Tanović
Reply to  AM Hants

And School busses in Yemen.

and TV Stations as in Iraq several times

It was a center financed by the jewish benefactors Harwey Wenstein and Jeffrey Epstein.

our gay ukrainian migrant from Toronto again with his beautiful comments)))

Interbreeding, does tend to destroy any functioning grey cells.

iosongasingsing
Reply to  AM Hants

More than founded analysis: In the state of the jews the marriage extra race are prohibited.

Precisely, hence why I said it. The AshkeNAZI and Khazarian elite are meant to keep it in the family, just so they do not lose the treasures in divorce settlements haha. Poor loves.

iosongasingsing
Reply to  AM Hants

They have similar racist laws like in III Reich, that were inspired by them. Bobody else in the world except in slavery had it.

Do believe you are mistaking Russia for the US. They seem to make a habit out of taking out hospitals, as shown in Afghanistan?

Now why did they continue bombing the hospital, for upto 2 hours, after noticing the mistake? Not the first time, now is it?

Allan Campbell
Reply to  AM Hants

And especially as shown in Fallujah. When the usans destroyed Fallujah, their first targets were the hospitals, to put them out of action for the time of the commencement of the city wide atrocity.

AM Hants
Reply to  Allan Campbell

They always accuse others of their own sins.

“Malhama Tactical planed the recent attack on the town of al-Hamameyat in northern Hama, which was carried out by HTS and its allies. The attack was a major failure with the terrorist groups losing more than 70 fighters.”(c) This is the reason of “failed” strike :) There’s still need for such planners.