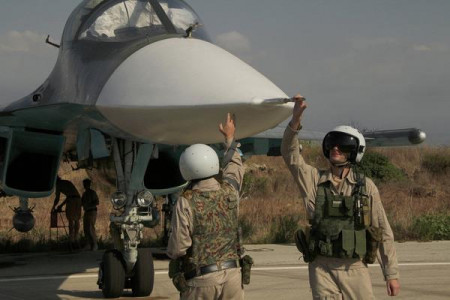 Russian aviation is continuing to maintain a steady pace of combat missions to destroy terrorist targets in Syria. There are on average 20 missions a day. In the last 24 hours, Russian aircraft destroyed 13 terrorist infrastructure targets. They include five command centers, two training camps, and six ammunition and equipment storage sites. All targets are closely monitored using active aerial, ground, and space reconnaissance, and the target is struck only if at least three sources of information place it on the list of targets. Russian airstrikes have managed to significantly degrade command and control, as well as logistical support, for militant formations.

Here are a few targets struck by Russian bombers: large forest near Keslandzhuk in Idlib province sheltering a training camp for terrorists. a munitions storage near Jisr-Esh-Shugur, munitions storage and command post near Maaret-En-Nuuman. There were also strikes against targets in mountainous terrain where the Islamic State has a number of hidden bases. Munitions used include laser-guided Kh-29L missiles, GLONASS-guided KAB-250 bombs, HE-fragmentation OFAB-250 bombs, concrete-piercing BETAB-500 bombs, and others.

Against this backdrop of Russian operations in Syria, the so-called Western coalition headed by the US also became more active. Its aircraft launched 16 strikes against ISIL infrastructure in the last 24 hours. 10 of the strikes took place in Iraq, near Kirkuk, Falluja, and Ramade, while 6 were in Syria, half of which were in the vicinity of El-Khasaka. The coalition did not describe the effects of the strikes.

The terrorists’ sponsors and states interested in overthrowing the Bashar Assad regime continue to express protests against Russian military actions in Syria. In addition to the muddled position taken by the US, UK, France, and Germany, Saudi Arabia, Qatar, and Turkey have sharply criticized Russia. Erdogan once again called Russia’s actions a serious mistake. Although all the reasons for such opposition are in plain view: illegal oil extraction, which is then purchased for pennies by “interested” comrades, the millions invested in the war, and the convenient access to the Mediterranean which is still controlled by Bashar Assad. Moreover, Russia’s success in Syria would be a tremendous blow to the US reputation, whose Middle East policy has failed completely.