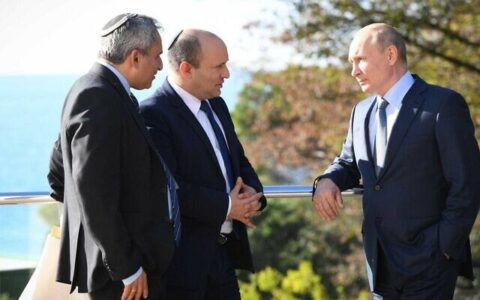 Israel likes to attack Syria, and while officials will mostly claim it’s about Iran, such strikes continue with alarming regularity, the only pause being when Israel is unsure if Russia is still comfortable with them.

This summer Russia suggested they wanted to slow down Israel’s attacks, but today (on October 22) Israel’s Housing Minister reported that they’ve come to an understanding whereby Putin will keep a deconfliction mechanism in place, and allow Israel to strike Syria with no response.

Details are not offered, as Israel tries to spin this as them getting everything they wanted at no cost. Russia has long had conditions on Israel’s attacks, however, and its unlikely that those aren’t still in place.

In particular, Russia has long warned Israel to keep its warplanes away from Russian bases, and that’s likely still part of the understanding. Russia has also been bolstering Syrian air defenses, a process which may be ongoing.

With a public imprimatur, Israel will probably increase strikes once again, though as in the past this is likely to mostly involve targeting Shi’ite militias.

AM Hants
Reply to  Zarathustra

Seems more like two sides of the family fighting, like it always has been, only which side seems more rational? Or are there three sides to the argument?

Zarathustra
Reply to  AM Hants

They feign conflict using controlled opposition and play different sides against each other to divide & conquer, then spread lies about genuine opposition as being “controlled”.

You would have to understand they think in an occult manner, understand they are psychopaths who feel no shame and are capable of committing the most horrific acts and unapologetically frame others for crimes they did not commit, no matter how despicable and cruel. Think of their Hegelian dialect as the Left & Right Hand Paths which predate the concept of Left and Right-Wing political ideologies.

“The best way to control the opposition is to lead it ourselves.” ― Lenin (Vladimir Ilyich Ulyanov)

Russian-Chinese? Don’t kid yourself for a moment.

I’ve looked into it deeply from multiple angles while you stick to your confirmation bias and ignore anything that does not fit your worldview, no matter how blatant and verifiable. You will simply claim “that’s a lie” and ignore the info, you do not think for yourself and allow your masters to do the thinking for you.

Why don’t you go and play with your blow up Hitler sex Doll with full moving parts,if you get my drift.

You are mixing up Russia with Ukropisstan Shlomo…

Truth is Isisraeli airstrikes went down from sn efficiency from 90% to 10%. They are literally shooting with duds. Better luck next time Shlomo…

New Khazaria was used to put Putin in power, now their government is making it more “multicultural” like in Europe. If constructing the largest mosque in Europe doesn’t give you a clue, then you must really be as blind as a bat.

Putin openly stated Russia isn’t for Russians, they are against “xenophobia”. Many of their communistic talking points proliferate the west with a far greater intensity, for you to believe the globalists are “Anglo supremacists” they would not be waiting on all fours at the feet of jews and Israel, meeting their every beck and call.

Instead they would have never given up their colonies and never make Palestine a jewish ethnostate called Israel that welcomes jews who commit major crimes in western countries and never be extradited to face trial for pedophilia, treason, and other crimes. You are braindead and therefore unable to understand, then you throw around the term “nazi” whilst applying memes from White nationalists who are all National Socialist sympathizers.

You are not saying the whole thing. Anglo supremacism is kind of real actually. And many Jews are white.

It’s true they appear white and some are indeed white, you can identify them by their names and darker phenotype with more eastern features. Often you can spot them a mile away, sometimes they hide extremely well in plain sight.

Clearly I can handle the truth, maybe you do not. You could at least explore other worldviews, including my own. But you prefer to only hear your own side and mistakeningly assume the war propaganda hammered into your skull is gospel.

So the Israelis are giving orders to their US vassals and asking for permission to bomb another country. That should fix everyone view on who’s running this whole show ;-)

That already happened, I don’t think Russia will let that happen again.

* Typed that sentence twice by mistake. A typo.

Very strange allies have president Assad ans the Syrian people… They allow UNHUMAN GENOCIDALS to invade Syrians an Syrian Kurdish lands and also Israeli bombing them…. “Alliance” to me seems having the same friends and foes/enemies…

its time Putin should be replace with Defense minister or Foriegn minster. Puting has become slave of Oligarch licking dick on both side .

Russia is using Syria as a weapons testing ground. And Putin is scared to go against “God’s chosen”.

Everyone needs to realize that there are no good guys on the world stage. They all believe and act on lies and self interest.

But that is exactly what they have been doing in fact they even protect the Israelis when they’re shooting at Russian planes.

This is bloody disgusting, I have had concerns about Putin for years but had hoped he was legit. He is out for himself. What is the point of continuing? Everyone is just falling over for israel. There is little humanity left.

you all in denial of Putin been another globalist bloodsucker whom look the other way when zionazis from stolen Palestine kill national russians in Syria, Russia is another#pharmamob “medicine” in Syria that kill you anyway sometimes even faster. #stop30billion #bds #endisrahellapartheid