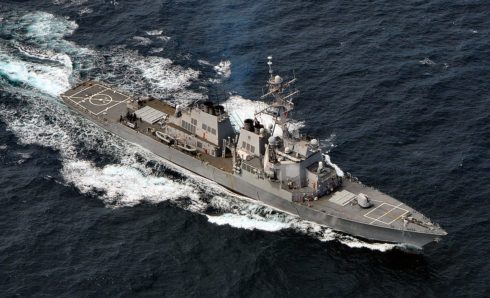 The US and its allies are capable of prepare its missile-strike group for an attack against Syria in just 24 hours, the Russian Foreign Ministry said following previuos warnings by the Russian side of possible staged chemical attacks in Syria’s Idlib to justify such a strike.

According to the ministry’s spokesperson Maria Zakharova, the US-led bloc has about 70 delivery vehicles with about 380 cruise missiles in the Middle East. She pointed out that US Navy missile destroyers ‘Karni’ and ‘Ross’ are currently deployed to the region. Each of them carries 28 Tomahawk cruise missiles.

Zakharova said that the “US military forgot to mention that they can build up missile capabilities to strike Syria in just 24 hours. The strike group of the United States, France and the UK currently consists of planes, strategic and tactical aircraft at bases in Jordan, Kuwait, Crete.”

Earlier, the US military denied Russian statements that the US was building up military forces in the region. However, the facts on the ground show that the US really has a strike force to carry out an attack on Syria.

Then you strike first.

It would be a bliss to see all the rest of the World uniting and standing tall against these murderers (US/UK/FR/ISRAEL/KSA…) and condemn their wars and unilateral sanctions that they throw over whichever country they want to demolish; because one day they will be the next. They should see that.

It is happening, bit by bit, people want to trade and have tourism. US’s idea is work for us, we deserve first dibs on the proceeds of any business venture anywhere. It is unravelling as we write. It may get worse but it will go.

With all due respect to you heroic folks at Southfront, you need to spell check and use Google to get the correct spellings of foreign names. It only took me less than half a minute to find the spelling of the US destroyer Carney. There is no Karni out there. You are in many cases the ONLY source of war news for the West and the higher the quality, the more likely my readers will trust you. (I already trust you but the West needs convincing if we are to jointly prevent this war.) BTW, I will gladly donate my proofreading services in case you were wondering. Been doing that editing and proofreading professionally for over 40 years.

In case you know some SEO too, they would also need someone to fix their duplicate content in Google serps, that would avoid further articles on how the poor Russian site is punished by the giant American search engines. https://maps.southfront.org/russia-warns-that-us-allies-ready-to-strike-syria-within-24-hours/

You are correct Vince.

It is difficult though for a non fluent English speaker to write in another language . Especially the nuance of any language. Google Translate is only reliable if short sentences are used with a simple and plain structure.

One of the great strengths of South Front News are the contributors from all over the globe and if you and others continue to be comprehending of what we understand they mean to say , the wealth of opinions critical to the US and her vassals will hopefully spread around the globe.

Accuracy is important I agree.

Yes, you are right. I had my own translation agency for over 35 years and before I learned to read Japanese and Chinese, I had to ediit and proof the English-language stuff mostly by translators whose native language was not English. I was almost forced to learn to read those languages to survive, first to edit and then actually to translate. The language logic is much different from English. It is all uphill the whole way.

Email them if you’re willing to volunteer your time. I don’t believe they read comments that often.

Any strike this time looks like it will be way more than the 100 they fired off in April. I hope Russia takes some down & not just with EW.

I’m more than willing to bet that the US wants to strike much more than just “SAA” targets. Iranian and Hezbollah assets will be hit undoubtedly, it would be the perfect excuse given the false-flag and what not.

When has the US Coalition ever been bothered about War Crimes ?

Only poor nations leaders and nations that are not vassals of the US are accused of War Crimes Rob :)

When you have a strong country with a tradition of honorable behavior you do not have to pay white helmets to stage your justification for starting WWIII. Humanity is put at risk because you people need more control over the masses and profit. Nope not a drop of honor in any of that. Here’s an idea, if it means that much to you, volunteer your grandkids for the next movie.

And let it be a snuff movie :)

Russia can stick its warning is the asshole!

Either helps, or shut up!

You know this is a STAGED PROVOCATION right?

The russians know this, they know its a trap…why dive in head first?

Let the fukus show their hand, russia is ready. The last 2 cruise attacks were epic fails. Do they think more will help?

Great. We are willing to piss away $700M just to damage Syria and risk a possible war with Russia just to make ourselves feel good, that we are still relevant in the M.E. because that is all we care about. How pathetic.

Yep, think of how many miles of road you can build with that money. Thats alot of pipe my son.

Old inventory past its use by date!!

US and UK both are economic, state and cyber terrorists.

I think if that sort of action did not play directly into F.uk.us and evil minion’s hands, we would already have WWIII.

If it was a good idea Russia would have pulled the trigger a while ago.

Each time it gets a bit more nerve wracking. No carrier task force means they are worried it could go hot. By every way of measuring F.uk.us wants war.

why would no carrier task force mean it could go hot?

The US is quite aware of how vulnerable those units are. If they are gonna turn up the heat why have a bunch of useless expensive shit sitting around to easily sink. I think they are on the verge of a serious escalation and do not want a headline that reads, carrier sunk 6000 dead. Cruiser sunk 800 dead, not nearly so devastating especially to all the other carrier crews sitting in port. Also they have such a huge signature that they could attract a missile accidentally, including one of their own!

Carriers are generally symbols of a nation. If you’re going to stage another Gulf of Tonkin event, it’s better to sacrifice a frigate than a carrier.

All world leaders should come together and jointly sanction and confront US, UK and eliminate their stooges ISIS, Israel, Al-Qaeda etc. Because they are attacking other countries and taking their nation as hostage and occupying their lands for petrol and for building military bases.

Their victims are Palestine, Yemen, Syria, Iraq, Libya and Afghanistan etc. If Afghani Taliban lonely can confront them then why not the rest of the world. They have liberated 75% land from US and UK military forces.

Bit of a contrived headline. Seems to imply a strike within 24 hours rather than the ability to organize a strike in that amount of time. Generally don’t appreciate this trick. Not even when SF pulls it. Click bate I guess it’s called.

There is a possibility that this time Russia shots down some aircrafts (UK or France) and say tree times was enough. US would back down and Trump would say ok they warned us, we are not going to WW3 for some rebels. That would mean the end of the Empire. My dream.

Sink some US ships as well :) That would lower the already poor morale of the US Navy even further :)

always if there is a “this time”. also, why shoot down US planes if they bomb empty buildings.