On January 30, the Russian military blogger Fighterbomber released a video, which allegedly shows a Russian Su-34 supersonic fighter-bomber launching a Kh-35U missile at a ground target in eastern Syria.

The Kh-35U is in fact an anti-ship missile with a range of 300km and a 145kg high explosive (HE) fragmentation shaped charge warhead. The missile is equipped with an X-band active radar seeker and an advanced internal navigation system (INS).

The use of missile against a ground target was not a surprise, because it is well-known that the Kh-3U has this capability. However, the pinpoint accuracy of the strike shown in the video was at least impressive.

An observer named Samir, with the handler @obretix on Twitter, was able to geolocate the alleged Kh-35U strike in Fighterbomber’s video. According to him, the missile hit a building in the southern part of the city of Raqqa, a dense urban area. 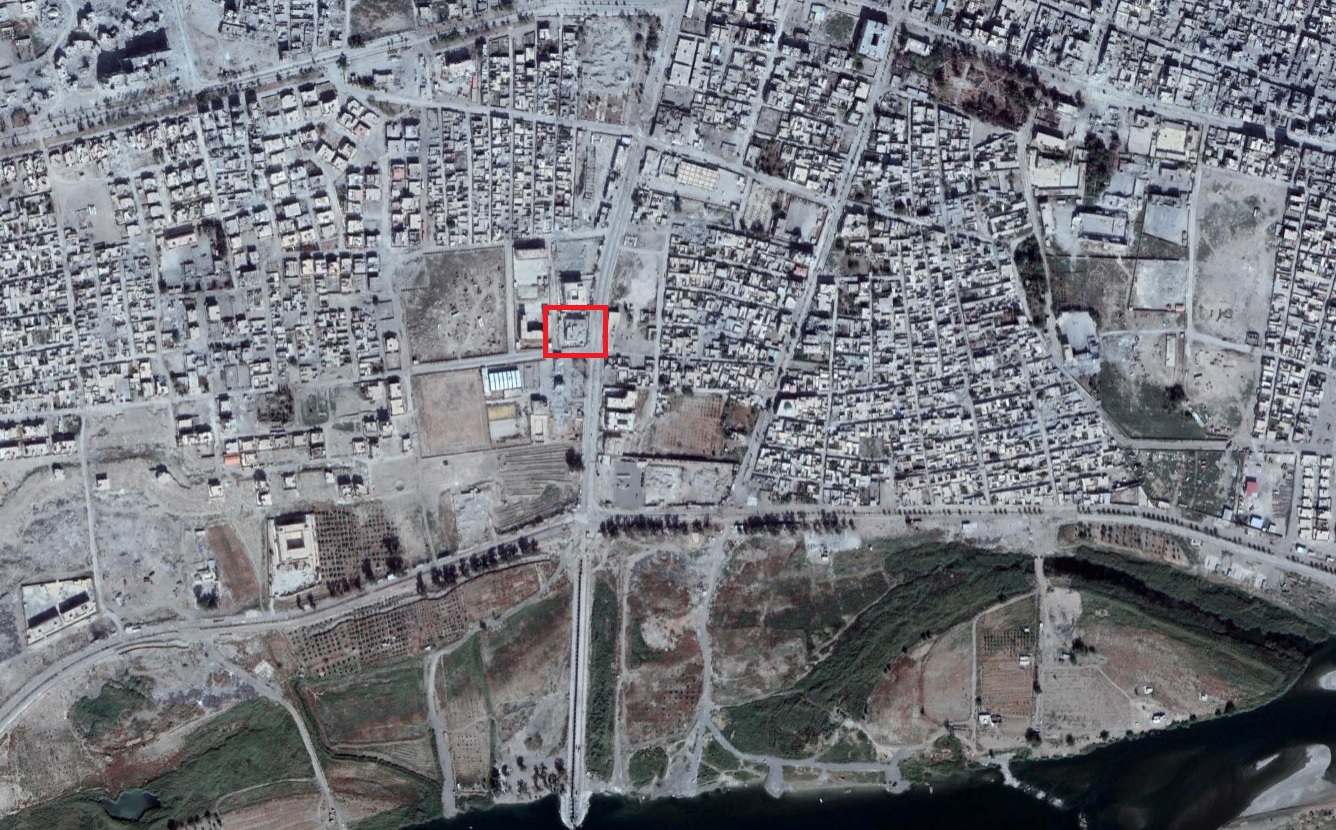 Geo-located by @obretix, via Google Earth

Advanced multi-purpose missiles such as the Kh-35U allow not only Russian warplanes, but also warships to hit sensitive ground targets such as ammo depots, radar sites and command and control centers with high accuracy.

you are referring to paper mate pen and the answer the russians given to their cosmonauts when they told them pens dont write in no gravity environment right?

When the russians had the same problem and called to their control center the answer was use your pencils instead.

actually that’s a famous urban myth. Graphite dust get created when sharpened and the graphite dust is combustible and conduct electricity. Definitely not a good and safe thing to do in a space station full of electronic equipment & panels

Here’s the link for the real history:

Brilliant! The soundtrack is awesome! :) Original lullaby song, was remastered to be the song about a cruise missile.

the high accuracy of radar asm munitions against ground targets is likely in no small part owed to the extraordinarily high resolution radar “pictures” which have been shown on SU-34 displays.

Fighter bomber published at least two images in his instagram channel, showing in cockpit screens with displays of a city (possibly Idlib), and a resolution under the meter (single buildings were clearly discernible, along with all the structures making up the urban area. Some uneducated commenters thought it was an infrared display – in fact no western fighter radar has similar imaging capability, only SLARs mounted on large recon planes are in the same order)

Do you have any link to prove your claims?

I talked about material released by fighter bomber on instagram, bring your ass over there and do your homowork instead of doing jewish lawyery here.

I’m a pro-Russian if you haven’t noticed already…

how do i care?

you haven’t answered on which claims i have to prove.

And you haven’t answered why you have such a problem hitting Israel to stop the attacks on Syria.

I already answered it ad nauseam, but since it doesn’t suit your agenda of provocations, you just ignore it

Your position is that you’re a pedophile apologist who supports the evil Jew baby rapers and you don’t want the problem corrected or for them to be attacked. That’s your position. The IDF has been hit multiple times. You haven’t explained why you have such a problem attacking the IDF when they’ve already been attacked and none of your objections made any difference. The US didn’t intervene, the IDF didn’t invade Syria, and the “escalation” wasn’t any different than the non escalation attacks of the same magnitude.

You’ve also been peddling this nonsense about the attacks don’t matter because the Jews aren’t hitting anything when the Syrians say that they are. Why don’t you just admit that you’re a Jew pedophile rape supporter, liar and a loser shilling for Jews?

I’ve made my position clear, I condemn Judaism and want it extinguished without genocide or violating people’s human and civil rights in a legal, moral and ethical manner so that the planet is Jew free.

R u? then you be able follow what the russians are posting in various sites and prove it to your self. I have.

One should note that pictures that was posted had reduced resolution (instagram downgrades them automatically).

So what do you think about using this equipment against Israel? You seem to have a very two faced attitude when it comes to dealing with this evil Jew pedophile rape cult.

Putin is too smart to make that mistake. You are way too blackpilled my friend. As soon as Putin gave Syria some S300 the zionists ran to Russia to plead for a deal. Putin is playing chess.

You need to do a reality check. IDF facilities have already been hit multiple times with Russian supplied weapons.

They were hit by Syrians, not Russia. Big difference.

If they’re only half as effective as the integrated air defense system that the SADF is running in Syrian skies, with 75% to 100% interceptions. The IAF will be quickly attritted. Using Russian satcom integration, the SADF knows where most of the Jew fleet is 24/7. And can destroy it on the ground and in the air. S-300/400s can hit mobile and stationary surface targets. Including Iron Dome launchers to take down Israel’s air defense system. So that IDF/IAF positions attacking Syria can be destroyed with missiles that Iron Dome is capable of destroying. But that can’t be stopped once it’s put out of service.

The Israeli air defense system is a US clone. Thaad/Arrow 3 is for ICBMs only, anything operating below 40 km or 50 km altitude can’t be stopped. The faster S-300/400 missiles travel at twice the speed of what the Patriots and Jew clones are capable of stopping. There are also Russian missiles that fly close to the ground below the 50 meter minimum altitude that Patriots are capable of intercepting missiles at.

If the Jews try to escalate and the Syrians respond with comparable or superior fire power. The IDF is going to get hit and hit hard. And will suffer more damage than it has since it got overrun by Syrian armor in 73.

anything you are trying me to do, i won’t do it.

anything you’re trying to me to not do, i’ll do.

A song about how Russia nukes America, how cute, no wonder why Russia is on 3rd place at suicides rate

And US as always is number 1

You had it prepared, don’t you, little emo?

One has to be an ukro like you to see it the way you do. Its about retaliation it need be and about little bears (children of Russia) well protected from outside enemies :) It’s a humor of РВСН.

This are parts of the song: “From New York to Alaska … Bourgeois vicious mourn …. And in Moscow the button is red” Aren’t you all Internet whores “Vicious Bourgeois”?

that’s what happens to countries dominated by zionazi thugs.

As the above were removed, suicide rate has been decreasing steadily.

it should serve as a warning for all the christian countries in europe and america so willing to give zionists leadership positions in exchange of more debt.

Do you mean that Russia is the most Zionist dominated country, since it has the highest suicide rate?

you not only hit the bottom, you’ve already started digging.

“that’s what happens to countries dominated by zionazi thugs.” I’m asking you again, is Putin a zionazi thug?

I’m saying, you sound like a boxer that has been beaten so hard that doesn’t even remember his name. know what i mean? lmao.

Yeah I know what you mean that you wish so hard I was beaten that you hear my voice begging for mercy.

that stuff is supposed to express laughter and amusement, not to make me look cool.

Then I’m not a boxer and never got beaten that hard :) However Russian is on the first place this year already, at suicide rates, guess Crimea didn’t compensate Ruble decimation.

you must have missed all the economic indicators:

inflation at 3% and unemployment under 4% are guarantees of two things:

countries will do well when traitors are taken away from the political system. My hope is to see the same in the whole rest of the fucking world.

Ohh my bad, it’s on 2 after Lithuania: http://worldpopulationreview.com/countries/suicide-rate-by-country/

Btw for how many decades did Putin guarantee the grow?

for as long as it’s needed to send all the illwishing fucktards wanting to get their dirty hairy hands on the country to fuck off.

Maybe if he will increase the retirement age some more he could abolish the retirement at all and criminalize death so anyone dying will be guilty of treason and sabotaging of the Russian economy.

*says someone who, when wanting a pension, has no other alternative than start paying for a private one*

You’d be amazed how good are the paid services comparing to the ‘free’ ones ;)

These can fly at ground level and might be able get past anti missile systems like Iron Dome to destroy IAF and IDF targets in Israel attacking Syria. I seem remember having read that the minimum intercept altitude of the Patriot is 50 meters. And these fly well below that.

It’s also worth noting that if this strike did occur in an SDF controlled area. That the Russians are willing to hit targets there. Just like the Iranians are.

Venezuela needs some Chinese anti ship missiles, they can reach Washington from Caracas. If the US attacks, take out the White House.