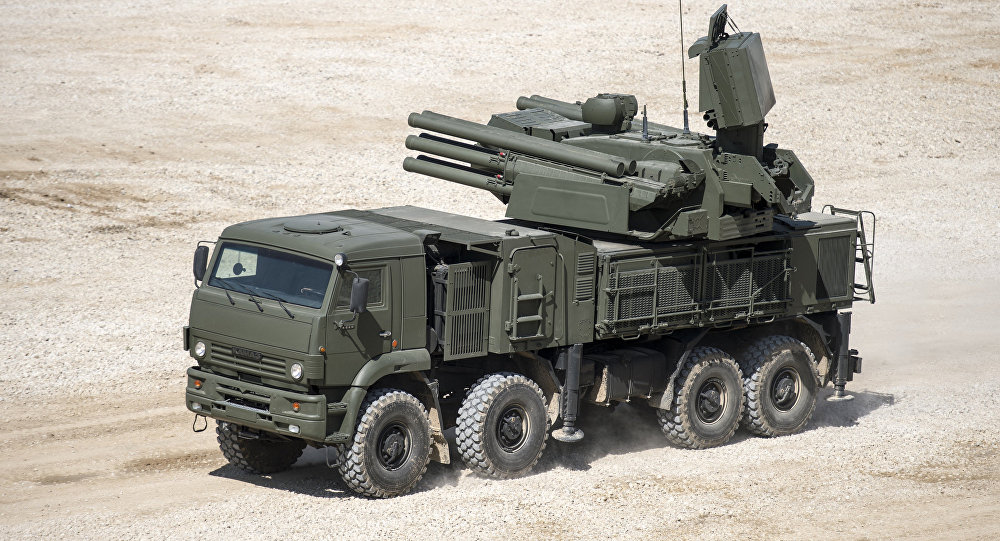 The United States have supplied Kiev forces with at least 20 HIMARS systems since the start of the Russian special military operation in Ukraine. These systems are mainly armed with M30/M31 series GMLRS GPS-guided rockets, which have a range of more than 70 kilometers.

“We fulfill the objectives of shielding military facilities, and also civilian infrastructure. The vehicle’s specific feature is its 360-degree view capability to engage many types of aerial targets: aircraft, helicopters, MLRS, and also drones,” the commander said in a video released by Russia’s Defense Ministry

“This vehicle can operate during a march and on the move. We shot down various types of targets: both Bayraktar drones and Tochka-U [ballistic missiles]. A HIMARS is an altitude target and has its ballistics. Due to its high speed, it is necessary to react quickly to make a decision. These [Pantsir-S1] vehicles have been upgraded to engage this target,” he explained.

In December, RIA Novosti reported that Russian air defenses have received a new software that allows them to quickly detect, tack and shoot down GMLRS rockets. However, the news agency didn’t specify back then which systems were upgraded.

Ukrainian HIMARS and MLRS rockets are being intercepted by Pantsir-S1 and other Russian air defense systems on a daily basis. However, they continue to pose a real threat to military and civilian targets.

Putin Is Looking Like A Fool, I Mean Really!
Reply to  Mexican American 🇲🇽

Still waiting for the Russian Winter Offensive, instead all I get from the Russians is some crappy software upgrade for their air defenses, that the Ukrainians prombally the same day is going to blow up! I don’t support Kiev but I just think the Russian Military Campaign is been the biggest screw up of the 21st Century, even France is laughing at Russia, and saying Wow even we can’t screw up something this bad!

And that’s why the US empire is desperately scrambling to give the armed forces of the failed Ukrainian CIA project two or three dozen clunker MBTs, and why the Ukrainians are on round 5000 or so of conscription and that’s why Krusty the Klown of Kiev is relentlessly begging for more money and weapons. Because Russia is so comically inept, right UKretard fuck-o?

Sunny
Reply to  Putin Is Looking Like A Fool, I Mean Really!

>t-they are laughing You are just projecting your own insecurities. Find out the cause and maybe work on that first before you say anything else.

Clubofinfo
Reply to  Putin Is Looking Like A Fool, I Mean Really!

copying and pasting the same comment over and over, supporting the US as it loses over and over again in every conflict it tries to get involved in, and talking like a neocon moron probably is a sign that you are one of them. Give up. It is you that spent multiple trillions of dollars and a third of your lifetime trying to capture Afghanistan only to lose

none
Reply to  Putin Is Looking Like A Fool, I Mean Really!

I don’t speak for anyone but myself. The Russians, with their leader Putin, prevented an Operation Barbarossa 2 with the SMO.

Darius
Reply to  Putin Is Looking Like A Fool, I Mean Really!

one more template poster , “I just think” – not convincing , you don’t think , you trash or litter or which is the better word for such activity.

Ghost of Moscow👻
Reply to  Darius

The Russian Military 🪖 is the biggest joke of the 21st Century, even the French are laughing at the Russians and saying: Even we couldn’t screw up a War like how you guys are doing!

zeebra
Reply to  Ghost of Moscow👻

Congrats on being a tool.

What a dumb ignorant pigg.

Nobody
Reply to  Trevor Jennings

Wishful thinking doesn’t change reality. If you support globalist fascist in the US and their brainwashing of their own population with insane ideology or not, doesn’t matter at all either. The fact is that those people are waging global war against everyone including your neighbour.

Russia is not onlu defending itself, it is defending the world against those kind of scumbags, including you and me.

Just cheap WAGNER knife in your neck with even cheaper nuke in your ass, you fucking LBTQ+++ cunt.

Consistently made over $20,00 in income from home with the benefit of smooth playback and sticky online interest. |F330″ I actually made $18,00 with this perfect home income. Everyone can now without a doubt. … make extra money online by using——𝐨𝐧𝐥𝐢𝐧𝐞𝐜𝐚𝐬𝐡𝟗𝟐.𝐛𝐥𝐨𝐠𝐬𝐩𝐨𝐭.𝐜𝐨𝐦

In other news The head of the German Ministry of Defense said that Leopard 2 tanks will be delivered to Kiev no earlier than in 3-4 months. In other words after the war is over lol. Germany is trolling Ukraine and Poland haha. NATO has fallen apart. U.S. is never sending Abrams to Ukraine. First of all those 75 ton tanks, fat overweight obese American turds would not last 1 minute in Ukraine. The sheer weight of the Abrams tanks (150,000 pounds) is far more weight than the small Ukrainian rural bridges can withstand as far as continuous weight is concerned. Bruh…the NATO strategists are embarrassingly low IQ. Globohomo thugs.

They wouldn’t be able to transport them anyways. They require heavy transportation to move from deployment to deployment. Any long distance travel puts extreme stress on the tanks systems and mechanics. The transportation of dozens of abrams would be easily spotted. And easier taken out. Abrams wouldn’t fare well in the terrain either. Roads are wide enough or of poor Conditioning and would result in losses by them getting stuck in mud and just sunk to levels where it is unrecoverable without geavy equipment

Good point. The Leopard 2 weighs 67.5 tons. Is Germany gifting the Leopards (or leasing them) to Ukraine? I’m just worried for the Ukrainians about the sell on value of the tanks if they are subject to lease agreements.

This should be confirmed independently. Just claiming to shoot down ballistic missiles is meaningless.

Russia should bring in NATO observers to verify this, huh?

They have been shooting them down in large numbers to be fair. Even the US has been admitting that where RUSSIA has air defensive installations that HIMARS are not getting through due to the low number of HIMAR missiles.

Thanks, Bernstein. How’s your investigation coming?

An excellent chess move !! Of course, for the peoples with some knowledge, not the useful imbecile fucktards like Jens Homo or Tommy redneck oklahoma Sawyer faggot. Why ? Because Pantsir have a reaction time 5 TIMES better than the S-300 and due to its short-medium range, accuracy is almost double. Not to mention the reload time which is 15 times more than an S-300. Btw, rot in hell, banderovite Fuhrer Cocalenski !

hahaaa…Jens and Sawyer still trying to figure out how Russia got them Pantsirs up the roof using the elevator lol. Inbred Nordic son of a Berserker and a sheep shaggiing Oklohoma orphan.

Ultrafart the Brave
Reply to  7even-N-6

This is actually interesting though. Those systems weigh several tons. Those structures are well built and reinforced. Word is many government buildings in Moscow can survive anything but a direct nuclear blast, either some even capable of sustaining the damage to some degree.

USA is no more from about 120 years ago……only Jumerica is left.

Putin Is Looking Like A Fool, I Mean Really!
Reply to  Romanian whore

you troll are saying that since Feb. 2022

Ugledar about to be liberated

Still waiting for the Russian Winter Offensive, instead all I get from the Russians is some crappy software upgrade for their air defenses, that the Ukrainians prombally the same day is going to blow up! I don’t support Kiev but I just think the Russian Military Campaign is been the biggest screw up of the 21st Century, even France is laughing at Russia, and saying Wow even we can’t screw up something this bad!

Ukretards seem to only expend energy on stealing. You’re so lazy you’re cutting and pasting the same posts on a single article. Lazy, stupid Ukretard.

if the US gives ATACMS to Ukraine, it can be considered a smokescreen for the US to launch a first strike on Russia, because it is basically going to drain the Russian ballistic missile defenses deep inside Russia and also make Russian nuclear forces more tolerant of incoming missile strikes. As such, it is warranted if the Russian nuclear forces don’t change their habits to be more tolerant of missiles incoming, but instead respond by nuking the US if an ATACMS is launched at Russia

@Anna, not really much for your sex business

The number of deleted comments suggests that a US Troll attack has been shot down.

The Russians can’t win on the battlefield,so their stooges have to do it online!

You know what South-front I have been waiting on news about the Russian Winter Offensive❄️🥶, that everyone keeps talking about. Instead i get a stupid article, about a software upgrade for the shitty Russian Air defenses, that Ukraine is probably just going to destroy in the same day that it was upgraded!

Kev not Kiev
Reply to  Ghost of Moscow👻

The attack on Ukraine caused euphoric joy in the Russian embassy: America would finally be shown who is the master here. Then, when the attack went as it did (military tragedy, even farce) , the euphoria faded, but the belligerence did not. All what is left are just these rather pathetic pompous claims of new Wunderwaffe and highly exaggerated claims of enemy losses.

The troll party going on here, looks like Elon Musk gave out some more free internet to the mercs in Ukraine so they’d have something to do while holding their heads between their legs in a trench dodging, well not dodging, Russian artillary strikes. Go you… Yanky Trolls are a special class of trans-people, they ‘choose to identify’ as right, even when they’re wrong… Ya’ll have ma pity…

Matias
Reply to  Kev not Kiev

Putin’s corrupt system fueled by theft and deceit has hollowed out the Russian military and left Russian society generally cynical. Russian state television features bloodthirsty commentators while thousands of Russian young men flee the country to avoid military service. The sacrifices Ukrainians are willing to make as they fight for their lives and their country seem foreign to Putin’s Russia. Like the Czarist regime in the early twentieth century, Putin seems to have believed a “short victorious war” was just the tonic his system needed. But Russia’s failure in the 1904-5 Russo-Japanese War merely exposed the rot at the heart of the empire..

Idiot troll. It’s Slithering Ukronazis and if your to stupid to notice? Russians are liberating the Donbas from Nato and Zelensky’s trash UKRONAZIS 🗑.

Must be brutal knowing Natostan was fighting over weather to send useless Leppard Tanks. Just more bombed out garbage from scenes of these tanks in Syria. The Ukronazis are scared shit less right now from which direction death comes.

Russia is a shitthole of a country always was and will be till the end which is this year , The Civilized people of the world are done with your bullshit and it’s time to fix that problem EH