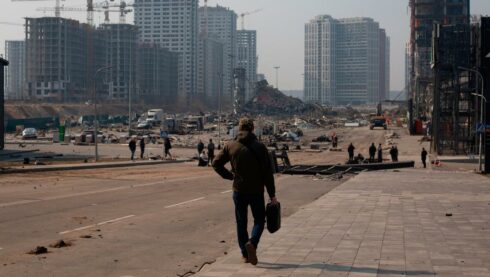 The West is irresponsible in further fomenting tensions by sending more armaments to Eastern Europe.

Much is talked today about the fuel and energy crises that the current conflict in Ukraine can worsen. Not so much is talked, though, about how food insecurity can become a major crisis – especially in the Middle East and Africa, but actually everywhere. Global food chains are expected to be affected, thus further exacerbating already-rising food prices, as Lama Fakih (an executive Middle East and North Africa director at Human Rights Watch) warns.

Both Ukraine and Russia happen to be leading exporters of agricultural products to North African and Middle Eastern nations. These countries are heavily dependent on grains from Kiev, for example, and the price of bread and other basic food items has been escalating. Most of these countries already face internal conflicts and have populations struggling with food insecurity. For example, approximately 80% of the wheat Lebanon imported in 2020 came from Ukraine. Egypt, in its turn, remains the world’s largest wheat importer, which places this North African country in a very delicate position: about 50 percent of its imports come from the Russian Federation, while another 30 percent come from Ukraine. Libya imports 40% of its wheat from Kiev, and Yemen imports around one third of its wheat from Ukraine, while 8% comes from Russia.

In fact, the potential damage is global. 45% of Ukrainian exports are agricultural-related. It is a leading exporter of poultry, wheat, barley, and corn, and much of its wheat comes precisely from the Eastern Ukrainian areas where most of the heavy conflict is going on. In fact, the Black Sea area – affected by the current military operations – exports over 12 percent of the food traded globally. Moreover, Ukraine possesses about one-third of the planet’s most fertile soil, according to the UN Food and Agriculture Organization (FAO). However, on March 9, Kiev banned exports of grains and many other food items in order to prevent a domestic crisis in times of war, thus disrupting supply chains. This is quite alarming because the planting season is to start this April.

The Russian Federation itself is the largest wheat supplier worldwide and one of the main producers of fertilizers. The problem is that it could halt fertilizer exports as a response to the heavy economic sanctions imposed on the country. In Latin America, for example, Brazil imports 95% of its nitrogen fertilizers, Moscow being its leading supplier (21% of the amount imported by Brazil comes from there). Brazilian harvests have been much damaged by droughts since 2020. In any case, the increase in fuel prices in itself affects food transport costs, thereby affecting agricultural productivity worldwide.

There is a global energy shortage crisis today, which was caused by the supply-demand imbalance after the pandemic and was made worse by the global supply chain crisis, among other factors. Due to a number of climatic and natural reasons, Brazil, India and China have been facing energy problems. The crisis is severe in the Middle East and beyond. Lebanon too has been struggling with fuel shortages, and so has Syria, and Turkey.

There are fuel wars going on in the Levant, a situation that has been made worse by US sanctions – the  US Caesar Act, in this case. Iran has been shipping fuel to countries such as Lebanon, Syria, and Venezuela, as part of its oil diplomacy, and there have been attacks on vessels (Damascus accuses Israel of being behind them). Western Europe, in its turn, had already been facing its own energy crisis which was aggravated by the pandemic, and by the delays in the completion of the now-halted Nord Stream 2 pipeline.

With on-going migration and energy crises, adding food insecurity to this scenario can lead to a catastrophic situation. One could say that by fueling the Ukrainian-Russian conflict and by sanctioning Moscow, the West is in fact punishing itself, but the truth goes beyond that: it is punishing the entire world.

Solving the current impasse depends on leaders opening channels of communication and dialogue with Moscow. Unfortunately, the Western Establishment today does not seem to have political leaders up to this task. Rather than seeking dialogue with the Kremlin, they have been trying to turn Ukrainian President Volodymyr Zelensky into a kind of a Western showman and mouthpiece of North Atlantic Alliance interests.

He was in talks with the the American Academy of Motion Picture Arts and Sciences to make an Oscar appearance – which did not happen – and has been addressing the parliament of a number of NATO countries to make his points (by videoconference). Joe Biden’s visit to Poland also only added fuel to the fire. To sum it up, the West is irresponsible in further fomenting tensions by sending more troops to Eastern Europe and failing to pursue good diplomacy. A cease-fire must be negotiated. But then Ukraine and the West must make concessions. Or else there will be hunger worldwide.

Putin - Leader of the Free World

The NeoCons will do everything possible to see their agenda fulfilled even down to the last Russian and Westerner.

ribillo
Reply to  Putin - Leader of the Free World

Their means are stupid. The global south produces the vast majority of food and mineral resources. They just need to sanction the west and trade between them. That is it. No more resources to the western snakes.

Not really. Most wheat and maize is produced in the Global North (USA, Canada, Australia, Russia and Ukraine), only rice is an important export in Southern Asia and also Argentina and Brazil are southern cereal exporters. Most of the Global South is too focused in neocolonial cash crops and can’t feed their own populations.

Exactly, they have produced nothing even after that we spend millions. It disappeared in the pockets of few. The Asian countries where equal rich or poor as the African countries and the middle east , south west Asia when they got independent; Asia is now improving beter then the west. Africa, middle east and south west Asia are worse then the moment they became independent. This indicates that they where never ready.

It’s part of the US imperial neocolonial order. The USA subsidizes its own agriculture, making others less competitive. If Russia and Ukraine have such productivity it’s largely because they were detached from the US imperial order in Cold War I.

At one point in recent history it was cheaper for Haitians to buy US-grown farmer welfare rice than rice grown in Haiti. The US agriculture racket is a crime against humanity.

Africa and the Middle East have god worship as the first priority of society. Development aid for over 70 years has not helped but preserved the system as it is.

Second priority is to blame others and live on the efforts of others. Their leaders have cultivated this system so far that they reached the top: putting all the money in their pockets, blaming us and their people and using the religion to keep their people stupid and poor and blame the world. Solution close the gates and let them grow up or die.

false—there is no malnutrition in South America or Asia. there is in Yemen Afghanistan due to anglo Saudi imperialism and in a few African nations related to drought

I’m not saying there’s “malnutrition”, I’m saying who exports and who doesn’t (mostly imports) cereals. You can still be well fed even if your country is a net importer.

Ken
Reply to  Putin - Leader of the Free World

If so You live in places, where no jews are.

Most like they they are, where You are not. Only Jesus coould make miracles.

Johan
Reply to  Putin - Leader of the Free World

Finally we will be forced to do so, sometimes freedom most be fight for. But at least let us worn out the aggressor, the murder of Russian and western young innocent boy’s. What will come to us will not going around us.

Because the invasion by the Putin faggots just disrupted the goblal supply of grain. Don’t start saying now that it’s everybody else’s fault. That shit won’t fly even by the shitty standards of Russian propaganda. It’s Vladimir Putin’s fault.

Wrong conclusion; the problems started due to Russia starting the war of aggression. The victim blaming that he defend him self against the aggressor, is demagogy, illiterates, stupids and zombies might follow in this trap but they are not free thinking persons, it is not sellable at educated self thinking humans. It is legal and logical that somebody attacked by lethal force defend himself is a human right, the, Mondial hunger and disturbance is caused by Russia, claiming otherwise is a crime.

In my professional live I trained managers and supported establishing new international industries and plants all over the world . I was a long time (intermitting) working in Russia. So I am sure I out wit you several times. Your reaction (s) are baseless, without fundament or argument, just a bunch of curses. I can tell you that in a solicitation you would not even be capable of getting a job at MacDonalds, nor would I hire a person with your level and attitude to clean the toilets.

Great use of logical fallacies in lieu of a reasoned analysis and argument. High-five to you!

Hunger equals discontent, equals riots. Biden is digging his own grave and the grave of the Democrats.

This is going to be very much (not at all) fun. Chaos is ensuing all across the world and we can’t even debate openly often enough anymore nor get credible information. It’s rapidly descending into an Orwellian nightmare but much less controlled because total control is totally impossible.

Wrong conclusion; the problems started due to Russia starting the war of aggression. The victim blaming that he defend him self against the aggressor, is demagogy, illiterates, stupids and zombies might follow in this trap but they are not free thinking persons, it is not sellable at educated self thinking humans. It is legal and logical that somebody attacked by lethal force defend himself is a human right, the, Mondial hunger and disturbance is caused by Russia, claiming otherwise is a crime.

Putin is the only one to blame. Putin’s futile war.

The west is clinically brain dead. Soon the rest of the body shall follow.

The Axis Strategy was to leverage Iran & Russia’s control of Oil as one way to fight the Jews, those who say they are but are not.

But putin is showing to be antiWest but not antiZionist. Crimea taken, cool, going into Syria, cool, all going well.

Then Aleppo started, and putin didn’t drop bombs on the west, and instead on Civilians, Muslims, our Brothers. A media fight with america, while bombing others as though all are pro american, yet no american soldiers killed, on Muslims.

So the day Russia backtracks to before Aleppo is what The World is Waiting For.

1. Putin dies without any regrets for Aleppo, those people will never forget.

Aleppo is the feet of the Axis, and any moving forward will just fall flat.

Knowledge is Power, and All Power is from Allah(swt).