A controversial article in the Russian Defense Minsitry’s journal “Armeysky Sbornik” regarding the usage of “psychic” warfare by the Armed Forces has gained a wide attention in the Russian media and will likely make headlines in English-language mainsream media outlets. 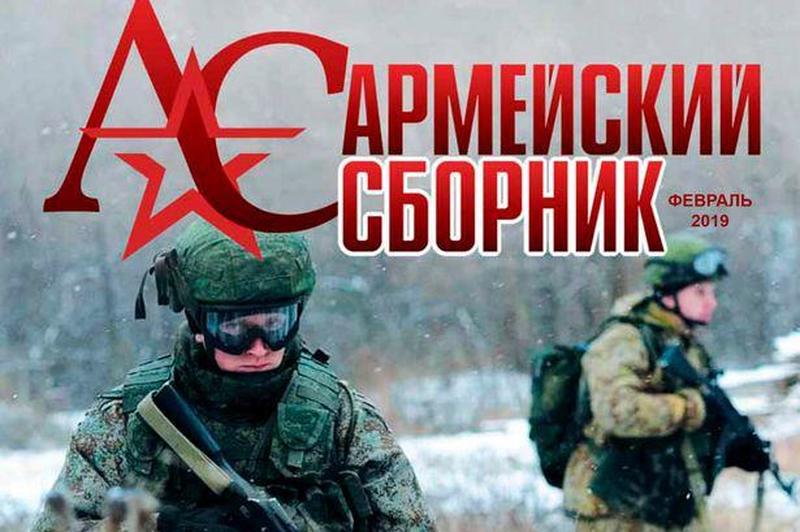 The Russian Armed Forces are training “psychic” special forces to defeat the enemy without contact, according to an article in February’s issue of the Russian Ministry of Defense’s journal “Armeysky Sbornik.”

The article “Super Soldier for the Future Wars” was written by reserve colonel Nikolai Poroskov and reports on the methods of parapsychology allegedly applied by the Russian Military.

According to the article, they are training soldiers who can hack a computer with the power of their thought.

“The command was interested in how to “remove” information: to reveal the enemy’s plan, the composition of the forces and assets involved. <…> Whoever possesses the technique of metacontact can conduct, for example, non-verbal interrogation. He sees through the enemy soldier captured: what kind of person he is, what are his strengths and weaknesses, whether he will be recruited. The reliability of the interrogation is almost one hundred percent. It is impossible to “get out” of. Techniques of counteraction to such interrogation are taught to special forces soldiers in case of being taken prisoner, also the highest leaders of the country or the heads of large industrial and banking structures – in order to preserve state or commercial secrets.”

Experiments are said to have been carried out – such as trying to read documents in a foreign language that have been locked inside a safe.

“By force of thought, it is possible to shut down computer programmes, burn crystals in generators, listen in on conversations and disrupt radio and telecommunications.”

Paraskov further claimed that Russian specialists have learned telepathy by working with dolphins.

“They mentally gave the animals the commands that they carried out. This was practiced by the famous trainer Durov. The technique, as it turned out, is applicable to humans. Moreover, the impact was even possible on the technique. With an effort of thought you can, for example, crash computer programs, burn crystals in generators, eavesdrop on a conversation, or break television and radio broadcasts and communications. There was success in experiments such as reading a document lying in a safe, even if it is in a foreign language that we do not speak; identification of individuals belonging to the terrorist network; identifying potential candidates for terrorist groups.”

“Such works [describing military parapsychology] really existed and were developed, but were classified. Now they come out into the light. But, as in many countries of the world, such studies are recognized as pseudoscientific, all this is complete nonsense. No parapsychology exists at all, it is a fairy tale. All the talk about the transmission of thought at a distance does not have a scientific basis, there is not a single such recorded case, it is simply impossible. This is a way to squeeze funds from the state budget. In Russia, this was put to an end in the early 2000s, when military unit No. 10003 was disbanded, which was engaged in the study of such pseudoscientific phenomena for military use,” he said.

Evaluating the content of the publication in the official publication of the Ministry of Defense, the head of the analytical department of the magazine “Soldiers of Russia” Anatoly Matviychuk told RBC that combat parapsychology “is not a fantasy” and “it is currently being developed.”

“Combat parapsychology really is true, it received great development in the period of 1960–1980s. The technique was developed by the Soviet Academy of Sciences in an attempt to discover the phenomenal characteristics of a person. A group of specialists worked under the leadership of the General Staff of the USSR Armed Forces. The achievements of that time still exist, and there are attempts to activate them. These techniques were tested in hot spots in Afghanistan and Vietnam,” said Matviychuk.

It also turns out that there is a long history of studying parapsychological research. The London Society for Psychical Research in 1882 was founded and it has researched it for over 100 years.

The US also has been carrying out parapsychological research since the 1930s. In the 1970s a specific emphasis was placed on “remote viewing” – a technique which purportedly allows one to project their consciousness over vast distances and even time. Physicists Russell Targ and Harold Puthoff of Stanford Research Institute (SRI) received a $20 million government grant for the “Stargate Project” in 1975.

There is also a description on how the two physicists received $20 million funding from a declassified CIA document:

“In April of 1972, Targ met with CIA personnel from the Office of Scientific Intelligence (PSI) and discussed the subject of paranormal abilities. Targ revealed that he had contacts with people who purported to have seen and documented some Soviet investigations of psychokinesis. Films of Soviets moving inanimate objects by “mental powers” were made available to analysts from OSI. They, in turn, contacted personnel from the Office of Research and Development (ORD) and OTS. An ORD Project Officer then visited Targ who had recently joined the Stanford Research Institute (SRI). Targ proposed that some psychokinetic verification investigations could be done at SRI in conjunction with Puthoff.

These proposals were quickly followed by a laboratory demonstration. A man was found by Targ and Puthoff who apparently had psychokenetic abilities. He was taken on a surprise visit to a superconducting shielded magnetometer being used in quark (high energy particle) experiments by Dr. A. Hebbard of Stanford University Physics Department. The quark experiment required that the magnetometer be as well shielded as technology would allow. Nevertheless, when the subject placed his attention on the interior of the magnetometer, the output signal was visibly disturbed, indicating a change in internal magnetic field. Several other correlations of his mental efforts with signal variations were observed. These variations were never seen before or after the visit.

For a cost of $874, one OTS and one ORD representative worked with Targ and Puthoff and the previously mentioned man for a few days in August, 1972. During this demonstration, the subject was asked to describe objects hidden out of sight by the CIA personnel. The subject did well. The descriptions were so startingly accurate that the OTS and ORD representatives suggested that the work be continued and expanded.” 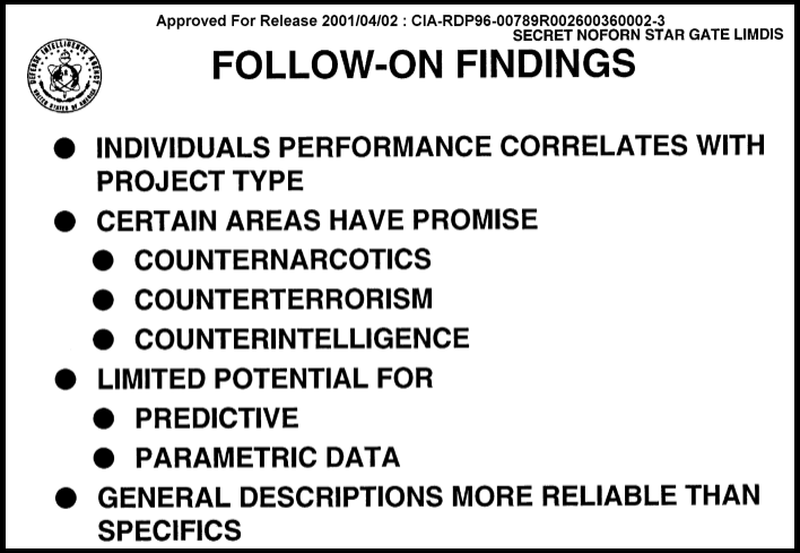 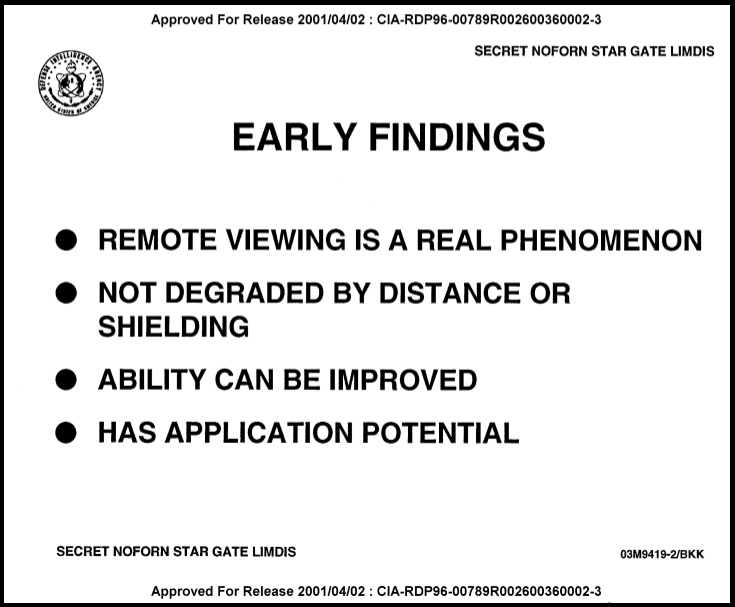 It turned out that the research actually reached the conclusion that remote viewing is real and possible, but quite unpredictable.

According to a declassified 1981 threat assessment, “Laboratory demonstrations have shown that gifted individuals using remote viewing can describe small details in a room or describe a SIGINT site and particular types of antennae.”

According to the project summary remote viewing was also used with some success during Operation Desert Shield/Storm and explored for applications within Joint Tactical Force support.

Smartphone Access, but thats why Values Drive Strategy is invinsible.

I switch to Huawei.

THE IMPACT OF THOUGHT TO DESTROY THE ANGLOZIONAZIS…

I dont believe in para me here and there is true at all.

But it is true, that the more You know about things, the better Yiu can manipulate them.

To me this article is a semi fake.

“But it is true, that the more You know about things, the better Yiu can manipulate them”

correct. That’s why your manipulations, conjuring and cajoling always end in failure. because you know nothing.

the article isnt fake. It’s been well established for many decades now that this is something the russians claim to work on, we dont really know much about it. I could be something they do to trick America into wasting time and money trying to develop something similar to keep from “falling behind” or it could be used as a cover story to explain away how they’re getting some other information without revealing its true source. Recasting the Red Star by Timothy L Thomas, a US DoD analyst talks about it a number of times.

Thank You for telling me. I upgrade with some %.

Anyone wasting Russia’s time with this garbage should be hung. If America used it for strategy, they’d be much better off right now. I won’t waste anyone’s time with my own para. Who will listen ??

What kind of rubbish and stupidity for God’s sake is this? Guess it is stupid American propaganda all the way.

I guess America and Russia are spying on each other with psychics then. The most improbable things are probably true these days. Hey .. didn’t Stalin want to replace his soldiers with half human, half chimpanzee hybrid warriors that were immune to fear and cold ?? What about that ??

And you’re the one, experiment, aren’t you, half human, half chimpanzee?

We are all apes, Icarus. Do not pretend you are not one as well. Amen.

Look down between your legs; it’s the same at theirs.

I got a dick, and you got a pussy.

You’re too tired from your job to make love to me. Hehhh.

Your eyes get tired from watching the doings of others. Haha. You’ll win .. in the end.

Reminds me of Yuri from C&C Red alert 2

What about the famous Kulagina who could stop a frog’s heart with her mind? She’s was more dangerous than Putin.