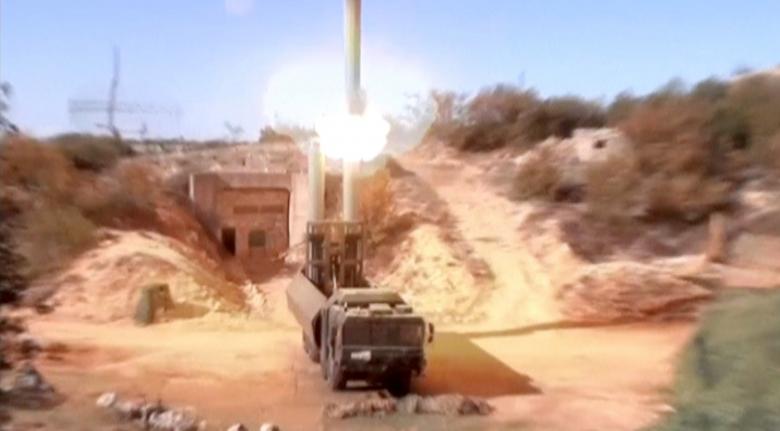 A still image taken from a video footage and released by Russia’s Defence Ministry on November 15, 2016, shows Russian Bastion coastal missile launchers launching Oniks missiles at an unknown location in Syria. Ministry of Defence of the Russian Federation/Handout via REUTERS

Russia keeps the right to shoot down missiles and to target launchers in case of an attack on Syria, Russia’s envoy to Lebanon Alexander Zasypkin said in comments late on April 10.

“If there is a strike by the Americans, then…the missiles will be downed and even the sources from which the missiles were fired,” Zasypkin told the Lebanese al-Manar TV, speaking in Arabic.

However, he continued by saying that a clash “should be ruled out and therefore we are ready to hold negotiations.”

On March 13, the Russian Defense Ministry warned it would respond to any actinos which would endanger its troops deployed in Syria by targeting missiles and launchers involved in such actions.

Considering that Russian military advisors are deplyoed in a high number of military facilities alongside with Syrian government forces across the country. So, any US strike aiming to deliver a notable danage to the Syrian military de-facto endangers Russian troops.

Currently, the US and its allies, mostly the UK and France, are considering whether to attack Syria over a suspected chemical attack in the town of Douma on April 7. Following the attack, pro-militant media organizations and then the mainstream media and representatives of the US-led bloc, including US President Trump, accused Syria of being behind the attack. However, no evidence were provided to confirm this claim.

The ball is with the west, Russia states it will defend, it is up to them if they are going to attack or not.

If the West attacks.. Russia has the Full Right to Obliterate them..they have been Decent, Patient & Pre-Emptive Long enough…there must be a lot of controlled Anger in Russia.. just like a sleeping Volcano…when it pops it pops

Russian planes flew over the French frigate in the Mediterranean Sea. http://anna-news.info/rossijskie-samolyoty-proleteli-nad-frantsuzskim-fregatom-v-sredizemnom-more/

I bet the french are shitting their panties right now. Remember when a russian plane flew over an american ship and shut down every systems they had? The americans tried to cover it up as much as possible. Maybe this kind of technology is Russia’s (ironically) trump card.

The same USS Donald “Duck Cooked” both times once in 2014 and again 2016, should be interesting as they sent USS Harry Truman carrier group days ago and not as they claim from Norfolk.

Next time they fly over that ship it’ll be to sink it….luckily Frogs can Swim

Russian ambassador in UN was very clear…..no arrogance demonstrated just plain reason…..Russia invited everyone to visit Syria and search for evidence of the alleged chemical attack…rejected…why?furthermore after the rejection Russian ambassador in a maybe historical speech ‘pleaded’ for no-strike to Syria . A superpower uses the word ‘please’ (pardon my translation if its not entirely accurate)…..lets note that the Chinese defence minister is in Russia and stated that Russia and China have an understanding and US should realise that…… well…it seems that global peace is in the hands of blondie….

Problem is blondie is in the hands of jews…

Cut the “Jews” crap. The Jewish are in the python grip of the Zionists. Huge difference. The same thing occurs with the white “trash” in the US. They are in the hands of their oligarchy blinded with racism.

I absolutely agree. Not all Zionistas are Jewish and not all Jewish people are Zionistas

You have to be Jewish to be a Zionist, Zionism is the Jewish flavour of Nazism. Herzl the founder of the Zionist movement wanted to join the Nazi party, but was rejected because he was Jewish, so he created the Jewish Nazi party, and called it the Zionist party.

But not all Jews are Zionists/Nazis, just like not all Christians and Muslims are Nazis.

Those zionists who are not Jewish go by the name of “neocons”, that is a Jew-controlled group.

I wholeheartedly agree with you on this.

Why are you defending an evil cult that pedophile rapes 1,000 cult babies a week, infects them with venereal disease, brain damages and murders them, and is responsible for a lot of the world’s problems?

You are wrong, immense majority of Jews are Zionists, I never found one who was not, it can be used interchangeably, no Python grip, that is the way they are.

It’s the Kabbalists that are the issue more than Zionists even they are at the mercy of them.

There is good & there is bad people…

US alone cannot defeat Russia in Europe let alone with China in if Russia is Attacked.

Same goes, if China is attacked Russia should be into defending China.

In ME , Russia, Iran and Turkey triad will rule there .

That is the best scenerio for world peace.

As long as US behaves and not go round threatening , peace is at hand.

Don’t count on China too much. I think China would let the US and Russia fight it out, then take out the damaged US. That’s what the US did in WWII, it watched Russia and Britain fight Germany, and when Germany was defeated, the US moved in and took it all.

Turkey with a leader addicted to drugs?a total nutcase?he is not trustworthy. he has one leg on nato the other on Russia….you cant survive long enough like that

We are gonna a rip off Trump’s head and Shit down his throat!

There is always another Trump to play Doctor Evil, America is full of them. You have to destroy the nest.

This is a reiteration of what what Russian Foreign Minister Lavrov stated some weeks back. It is a clear red-line for Yanki Scum to cross at their peril. Forget about the Frogs and the Brits they will only follow when told. The decision for WW3 rests with the Yanki Zionist Scum and will be issued by their Mouth Piece and should he refuse there is Pence. “There will be no world if Russia is not part of it”.

With how many are the Yanki Zionist Scum? I bet they’ll be wiped out pretty soon… if everyone takes out at least one…it’ll be over pretty soon…this time no one believes their WWII Bullshit any more…different start

Hallo mister Putin say something..now is the right time … Where are you?

“Let your plans be dark and impenetrable as night, and when you move, fall like a thunderbolt.” (Sun Tzu) What would the US do, if Russia took out the whole Truman Show carrier group?

Better to fight the US in Syria than Russia.. Really Russia has no other options, if it backs down American missiles will be raining down on Moscow in a year. If you look at how the US destroys a nation, it always weakens it economically and politically before the final blow. Better to attack the US, whilst Russia still has the strength to fight.

put down the bottle

Geopolitics is not your strong suite is it.

The Russians wouldn’t be saying this if they weren’t prepared to go toe to toe with NATO and put a smack down on them that will send them reeling.

Most European nations want nothing to do with this, and there is no public support for it either. It’s a desperation act by Israel, the Jews and their NATO Jew 3 and Saudi collaborators to try to salvage their rapidly failing Jew world order hegemony project.

It would be the end of the Trump presidency, which is already on very thin ice, if he starts a war with the Russians. The last time a US president tried this, the public opposition coming into congressional offices was almost universally opposed:

“About 60 percent of Americans surveyed said the United States should not intervene in Syria’s civil war, while just 9 percent thought President Barack Obama should act.”

This is the problem:

You are such a one dimensional bigot.

Why are you defending an evil cult that pedophile rapes 1,000 cult babies a week, infects them with venereal disease, brain damages and murders them, and is responsible for a lot of the world’s problems?

It shows doesn’t it?

Yes, it does. Thank You

No… he ain’t…shouldn’t judge to fast…otherwise ZioNazis win…Divide & Conquer. Accepting different Opinions & Believes is the best way to defeat them…

They’ve attacked me several times for truthing about Jews. It raises questions why. If they’re not one, then they’re clearly supporting this evil cult.

Sometimes we both use pretty strong language to express our deeper emotional feelings..hehehe..sometimes you get some strong arguments against those words…shouldn’t be a big problem I think…in the end we are all in it for the same cause…the ones that are not…pretty easy to recognize..some politeness among eachother is necessary…especially on occasions like these days…but I understand bro…

It’s time Africa and South America should step up real impartial and meaningful global diplomacy to save the world from spinning into irreversible abysm. They should boldly come out to condemn the western powers in this case for viciously interfering and seeking to snatch one of russia’s ally inside Russia’s arch of influence. If that does not work due to unjust nature of our planet, the last option would be to zone the world into two major blocks. One block headed by Russo-China and the other headed by US and its allies. I hope this can amicably end the ever mushrooming western greed, injustice, slavery and hegemony.

The USA has controlled South America for well over 100 years. That’s why the people are so poor, they have to keep Americans in the manner to which they have become accustomed.

The Monroe Doctrine killed the South American economies and doomed them to poverty and US sponsored dictatorships.

What does one make of this…it’s very creepy. It’s like they are playing a big game with us all that are outside the 1%. https://www.rt.com/news/423800-nebenzia-haley-kiss-shake-hands/

Target missiles yes, launchers I won’t believe it until I see it. But I hope they do, a couple of US navy ships resting on the ocean floor would make a fine home for heaps of fish and maybe even provide a meal.

If the imperialists really want to go to war, they will do some more provocations, trying to put the blame on the adversary, but it’s already clear that: 1- the bipartisan imperialists of USA and all the zionists in Israel and the world are the leaders of this, by the moment hypothetical, agression; 2 – that they planned a WW and executed their plan. This is, since Nuremberg, the worst crime that a political criminal can practice, and the imperialists have no chance of winning such a war. There will be a Wwar only if they are mad. Meanwhile, lets call for the people on all the worl to manifestate, by all the pacific forms.

Russia will only target USSA gear, but never Jewish gear. Funny cause Trump is not going to target Assad even, but Israeli leaders just vowed today to assassinate Assad themselves. But of course Russia is going to fully 100% allow Jews to fly in and murder Assad, cause Russians do not even know who the real enemy is to ethnic-Russians. Russians never learned who was really behind the Holodomor, and it was not ethnic Russians. https://holodomorinfo.com/

The Jewish Gear will be handled by some other Parties….believe me….the only option for Israhell: Commit Nuclear Suicide…bunch o’ trapped Rats…