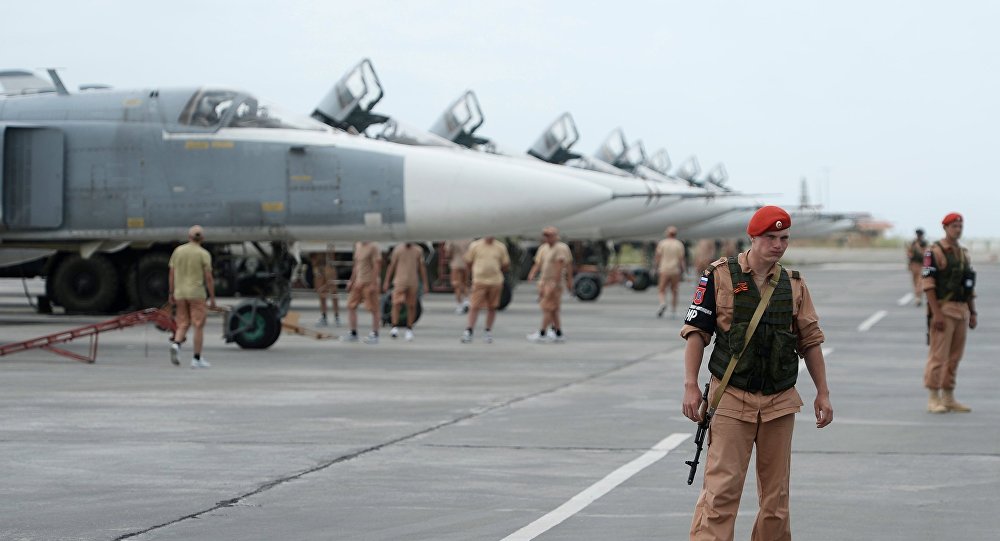 Russian President Vladimir Putin has agreed to a suggestion of the Russian Defense Ministry to reduce Russia’s military presence in Syria.

The Russian President added that the agreements reached on development of the military bases of the Russian Armed Forces in Tartus and Hmeymim would continue to be performed.

Putin also thanked Shoigu and Lavrov for “what has been done on this very important area of combating international terrorism.”

Russia should not reduce its forces in Syria now. They have to keep their forces there for at least another year or two!

It may be a small reduction. Maybe pull out some aircraft to Russian bases for maintenance along with ground crews. Other aircraft can be rotated back to Syria if needed.

maybe they’ll send the ships of the Northern Fleet back home? I did not hear or read anything on them since their mission was over.

You are right. It could be a small reduction but Russia should not announce that because the terrorists and their backers are listening and this kind of announcement is like music to their jihadist ears!

Well, they told that, when they arrived. They would be there until Assads were safe in power. Thats not the same as controlling all the country by proxies.

I support pro-choice Russia but not Anti-choice Assad, So if Russia leaves then the closest Pro-choice forces become Turkey and Israel. But I can go back to hoping all the anti-choice factions kill each other to reduce overpopulation. https://en.wikipedia.org/wiki/Abortion_law#/media/File:Abortion_Laws.svg

Tell that to the limp-wristed, weak idiots running the Russian government, who continue to call those spitting in their face and blowing up their planes “partners”.

There Russia goes being stupid again. Hasn’t Putin learned anything from the last couple attempts to reduce Russia presents before real peace is achieved? History is going to repeat I fear…

Remember when Putin announced that they would pull out? Months ago?

Heh this is just a PR move to signal a deescalation while operations will continue just fine.

I think the reduction will be minimal.Also the ceasefire will fail again.Probably within 3 months.This is why SAA is launching offensive against ISIS east Aleppo CS, before the ceasefire crumbles.

Of course Russia can return some ships to their home bases. This is a reduction of force. The SAA will wait until the moment is right to push from Kuweires. It all depends on the timing of ISUS taking a beating at Al Bab. The agreement has nothing to do with it. I assume that most of Idlib province has no interest in any ceasefire plan (Al Nusra controlled). And the conflict in this area will continue.

The last time Russia reduced its forces , it withdrew too early , and the SAA lost its momentum . This is the same story , its too early . Russia and Syria could win this war completely within 6 months , but not if the momentum is broken . Should be an increase now , retake Palmyra and Deir Azzor and the adjacent oil fields . Then after Trump is in office , as a good will gesture , a troop reduction only .

Agreed. They seem to withdraw or agree to cease fires too early. Palmyra is still in ISIS hands, though it’s not a crucial problem.

Still, what is the greater strategy? At this point it looks merely like Aleppo was all that was desired.

Maybe this action is taken with an eye on making sure Trump’s leftist opponents don’t have something to weep and tend their garments over. Ditto re French and German elections coming up. Maybe it’s important to the Russians to prove how temporary and limited their involvement is. Crimea has been spun as the New Mongol Invasion and proof positive of Putin’s desire to conquer the world. Putin knows what scumbags the Western press are.

Russia should fight on until all Wahabbi terrorists are dead.

In case nobody noticed, I think Putin just made Erdogan to own the f’king mess Turkey helped create in Syria. The unusual lack of details on Turkey’s part in the ceasefire are probably a face-saving measure extended by Russia. Putin understands how to let an opponent lose gracefully. Turkey must have really bent over for whatever deal was made. With the U.S. crack-smokers out of the negotiating room, Lavrov finally gave Turkey a good kick in the nuts and brought them to their senses. The truce is a sideshow – what happens now is ALL about what Russia secretly got Turkey to do and nothing else.

The non-ISIS head-chopper rebels have been herded to Idlib. I would bet dollars to donuts that Putin and Lavrov gave Erdogan an ultimatum: stop supporting the head-choppers for real right now or we will keep herding them north and west until all 40K+ are across the border in Turkey. Then they WILL be your God damn problem, not ours.

The only thing Erdogan seems to hate more than Assad is the head-choppers he armed and sent to Syria to kill him. If Putin did really get Erdogan to cave, then the ‘rebel’ part of the Syrian war is essentially over. Hard-core Idlib head-choppers who won’t quit have a month or two of survival at best without Turkish supply lines. They can be liquidated pretty efficiently. The non-headchopper rebels don’t want to fight anymore and just want to go home. They’re not going to break the truce anyways.

ISIS is still on the to-do list, but Syria can handle them once the rebel war is done and all the SAA/Hezbollah are freed up to steamroller over them.

Good analysis! Syrian Army and its allied militia need at least another year to clear most of Syria from the jihadist mercenaries and the presence of the Russian forces are crucially needed during this time.

Great insight! The #1 priority is to stop support for Jihadist in Idlib province. Erdogan may not have much use for them now. The UN has voted in support of this “ceasefire”. I am Sure Al Nusra will not agree, but their supplies and paychecks may be reduced. Happy new year to all!

will be the second time the reduced its milliary without numbers really don’t say much, 1 ship back to port or 5 ships back to port

Well – I hope (against hope) that, this moronic force reduction is at least balanced with reduction of Russian government pressure on the Syrians to call “ceasefires” every time they are beating the jihadis on the ground. That would at least neutralize the self-defeating stupidity somewhat!

Russia betrayed Syria like did with Cuba in 90ties.