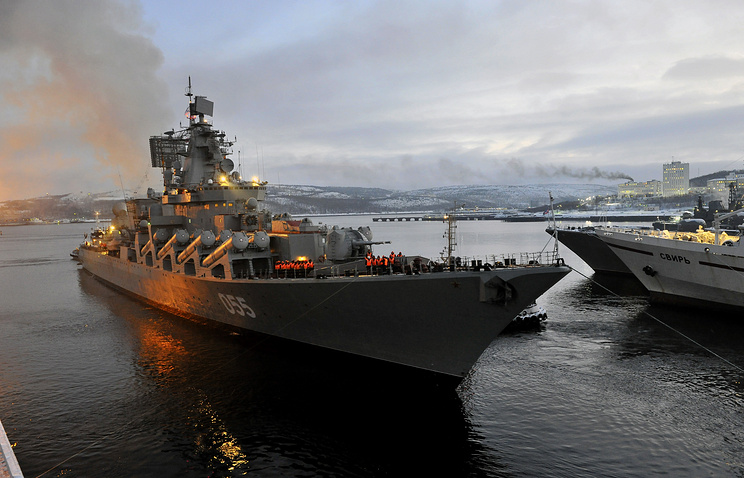 Russia will hold naval drills in the Mediterranean Sea, near Syria, in the period from September 1 to September 8, the Russian Defense Ministry announced on August 30.

The drills will involve 25 warships led by the Marshal Ustinov missile cruiser and 30 aircraft, including “the strategic Tu-160 missile-carrying bombers, the Tu-142MK and Il-38 anti-submarine warfare planes, Su-33 fighter jets and Su-30SM aircraft of naval aviation”.

The defense ministry said that “the grouping will practice a set of tasks of air defense, anti-submarine and anti-sabotage warfare and also mine counter-measures support”.

The areas covered by the drills will be declared dangerous for navigation and flights in advance in order to ensure the safety of shipping and flights.

Just in time for the gas attack coming!

Russia, Iran, Hezbollah, Al-Qud and Turkey must pull all resources to deter and if needed ti fight U.S, UK and France attack on Syrian. False Flag to be staged by UK agent and ISIS is well known being planned by US/UK/France. This fight will determine whether the right side will win or the EVIL U.S and its vassal states will continue to subjugate the entire world population. If Syrian being attack, the Ships, Planes and Sub that fire the bomb must be attack with out hesitation. May GOD help Syrian Government against U.S and Israel

The problem with Turkey is, they support the HTS ( former al Nusra ). It is HTS with the help of UK agent, who will stage the gas attack.

One thing is what they say, the other thing is what their actions are. What did Turkey do while 50 drones where flying over their posts towards the Russian bases for the last month…NADA. What is Turkey doing in north-west Syria, OCCUPYING. Turkey is still supporting many of the Jihadists., especially in the north. What did Turkey do in the last 8-10 days in Idlib, indstead of cleaning up among the jihadist before the Syrian army starts the final battle, Turkey drove dozens of trucks full of reeinforcemnet for their posts. Who let most of the European jihadists into Syria, TURKEY Wo made billions of dollars in trade with ISIS, by letting thousands of trucks with stolen Syrian oil come trough to TURKEY? Who let thousands of trucks loaded with weapons to the terrorists get trough the border, TURKEY. The list goes on and on.

Turkey is allied with Syrian government and are fighting against terrorists in Syria.

Turkey support FSA and FSA are allied with SAA against HTS and ISIS.

I`m not wasting more time with a ignorant moron.

Sorry these news are not good for Benjanyahu.

Nice try, but thats an old pic. Some FSA surrendered in the battle of the south and reconciled with the Syrian government, some even joined the Syrian army. But most of the FSA fighter, the hard core, where transported to Idlib to fight along HTS and all the other hard core jihadists. Show proof of the meetings between Turkey and Syrian FM….not old pics.

Also, if trump doesnt act on such fake gas attacks, it will effect him in the upcoming midterm elections in november which are super important! These gas attacks must /need to be stopped at all costs! Of course an Assad gas attack makes absolutely ZERO sense! So i truly hope that all is being done to stop such false flags!

Unfortunately there is a Trump foreign policy and there is a Trump admin. foreign policy spearheaded by Neocons Pompeo, Bolton, Mattis and Pence. An example is North Korea, the Pentagon said the other day, they will resume with massive drills in Korea, even bigger drills than before. Trump came back and said, there will be no drills.

All world leaders should come together and jointly sanction US, UK and Israel for attacking other countries and taking their nation as hostage and occupying their lands for petrol and for building military bases. Their victims are Israel, Yemen, Syria, Iraq, Libya and Afghanistan etc.

US and UK both are economic, state and cyber terrorists.

Well, the last time this happened, Syria was bombed shortly after.