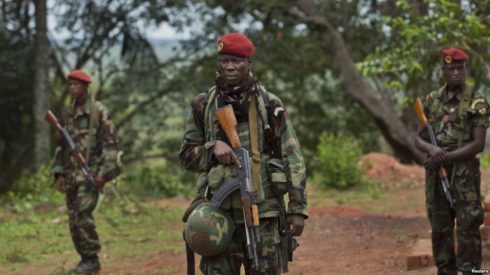 Russia is going to offer the Central African Republic (CAR) to establish a representation of the Russian Defense Ministry at the CAR Defense Ministry, a document published on the official portal of legal information says.

In order to sign the agreement, the Russian military will hold talks with the CAR and on behalf of the Russian government. According to official reports, the goal of the deal is to assist the CAR in resolving issues of military and defense industry cooperation as well as to boost training of the CAR military personnel by Russian specialists.

The representation will consist of five people. They will not participate in hostilities in the CAR territory. If they find themselves in an emergency situation, the CAR government will have take measures to ensure their safety, according to the document.

Earlier this year, five Russian military servicemen, 170 civilian instructors were officially deployed in the country in the framework of the CAR-Russia agreement. The agreement also includes the delivery of pistols, assault rifles and rocket-launchers as well as the training of 1,300 CAR troops.

The MSM is also actively speculating that Russian and Russia-linked private military contractors operate in the country playing an important role in the security of the CAR president.

Ivan Freely
Reply to  MADE MAKER

Saudi and Iran governments should be ready for joining together and become a great power for the defence of Mideast against US and Israel.

I don’t trust the congo prez he abuses his own peaceful protestors and he keeps stealing the elections..i DON’T TRUST HIM russia!!!

It’s the French who keep stealing elections, and gold, and anything else they can steal. The most troubled countries in the world, are those helped(controlled) by FUKUS.

I think the Russians dont give much of a toss what you trust or not.

For the record; CAR is not one country but several. The people the Russians are dealing with are based at the former colonial capital but they have no more legal basis than the several de facto independent states they’re fighting.

That’s how your kind would like it to be – dessecting states into smaller parts, than luring them into fighting each other and looting them while they are busy doing so.

The usual name calling, but in the end you’re just participating one of the misconceptions about Africa. If you pull out a map you’ll see the UN recognized borders and countries, but these correspond little to reality. The UN recognized governments are mostly the successors to the colonial governments that are drawn mostly from the areas of the former colonial cities. But most Africans don’t identify with, work for, pay taxes to, or fight for these formalized governments. Most Africans identify with tribal or regional governments that are often informal and having no defined borders or authority, but simply fact is when conflicts start men fight for tribal identities. This is possible because when war breaks out rifles are a luxury and heavy weapons are rare, thus much of the fighting is done with axes, machetes, clubs, and knives. In many cases in what are erroneously called insurgencies local leaders quietly buy old AKs then simply ignore the government and when a problem breaks out it is not so much a police action as it is a battle. In CAR’s case the post-colonial government was ousted in a war with a disenfranchized region, but the new government’s rule only extends as far as their weapons reach. In the far eastern and western regions coalitions of militias formed their own governments, bought weapons, and have thus become de facto independent states while the faction that currently control’s the old colonial capital claims to be the legal government over the whole CAR.

So, if what you’re saying is true, then not only the borders of Middle East countries needs to be redrawn, so does African nations as well. The problem is how to move forward with that situation.

Let everyone murder each other off, or let everyone come to agreement.

The former will settle the lines along ethnic cleansing/genocide patches, the latter will settle it along arbitrary (militarily significant) borders.

We have arbitrary borders (through enforced agreements), now just to chose intellect over some materialistic/tribal loyalty. Gotta make fair systems, but for that the colonialists gotta play fair. Russia is good at getting people to talk, but that’s maybe only because they don’t want everyone to fight all the time!

the USA are less than a one country than Centrafican Republic then. It’s a lousy conglomeration of states with different laws, capitals, parliaments, executives, courts, customs and so on.

The Centrafrican republic has one instance of all the objects above, making it a country no matter how much your zionist friends would like to see it divided.

“For the record; CAR is not one country but several”

For the record, you speak BS.

The 14 former French colonies, subjugated by the franc who have failed to establish their own African currency with Gaddafi, live in underdevelopment and their citizens migrate from us to Europe. They are seeking economic recovery and independence with China and Russian military aid that will prevent a Libya invasion.