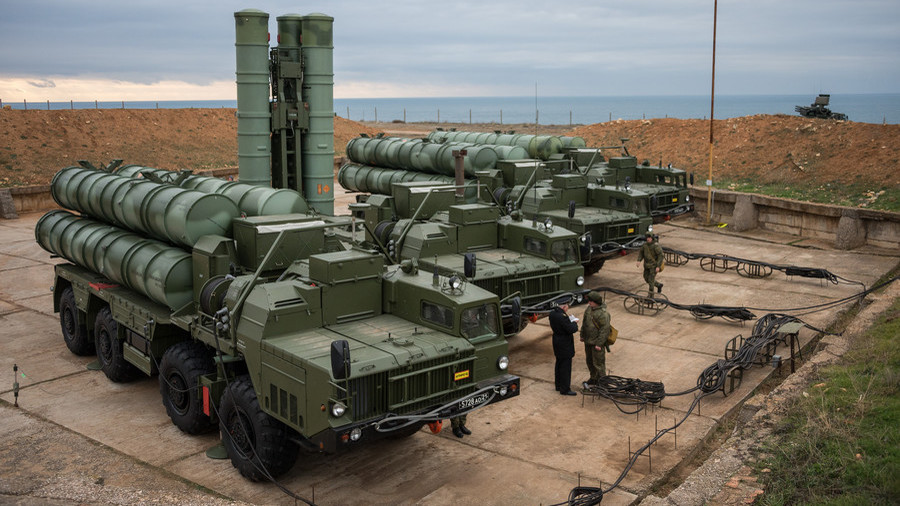 The Russian military is planning to deploy an S-400 long-range air-defense system in Syria’s northeastern region which is mostly controlled by the Kurdish-led Syrian Democratic Forces (SDF), several Syrian and Russian sources reported on November 3.

The advanced air-defense system will allegedly be deployed at al-Qamishli Airport which is located right on the border with Turkey.

The S-400 system can detect airborne targets more than 600 kilometers away and fire a variety of anti-aircraft missiles with ranges from 40 up to 400 km.

A number of Syrian and Russian Pantsir-S short-range air-defense systems and radars are known to be deployed at al-Qamishli Airport.

Around a week ago, the Russian Aerospace Forces deployed several warplanes in the airport. The warplanes took part in a series of joint drills with the Syrian Arab Army in northern and northeastern Syria.

Russia already has two S-400 systems deployed in Syria, one at Hmeimim Air Base in Southern Lattakia and another at a large air defense base in western Hama.

If true, the Russian plan to deploy an S-400 system in northeastern Syria is clearly a message to Turkey who has been preparing to launch a new operation in the region against the SDF. Moscow and Damascus oppose such an operation as it would further destabilize the region.

And it is programmed not to fire on Israeli missiles as per previous arrangements between Israel and rabbi Putin.

It’s not so simple as u present, for example, Mukhabarat has long standing connections with PKK, the PKK has conns with SDF, SDF is supported by U.S.A.. TAF wants SDF to be destroyed to continue with crackdown of PKK, Israel has long standing connections with Turkey and of course with U.S.A. SAA holds their horses versus SDF because they need them to drain TAF. U.S and A. keeping side with SDF nails coffin within the NATO. Every missile attack by IDF to IRGC supposed convoy drains IDF. From Syria point of view; Why interfere with the enemy (IDF-TAF-US) moves when the enemy makes mistakes????

Yes that’s right and both the Turks and the Iranians dislike the SDF so they will ally.

Wise words, dont waste your time with these blame putin types, its too much for their small intellects to understand.

S-400 is for high value targets like heavy attack drones, cruise missiles and military planes. For everything else you are probably better off using BUK and Pantsir.

AM Hants
Reply to  IMHO

‘you either have a country or you don’t’ – President Assad, supporting Russian efforts in Syria.

There is a new Ferrari in my driveway… but of course I won’t drive it!

Maybe a message to Turkey, maybe not. I don’t think they will use it to shot down Turkey’s drones. Only if they will somehow endanger Russian military on the ground. They maybe want to test it on their drones/planes to collect data. A BUK or Pantsir would be enough to shot down slow moving but high altitude flying drones. We will see. But good thing anyway as it let’s people wonder what they do it :-)

„A BUK or Pantsir would be enough to shot down slow moving but high altitude flying drones” – as we saw in Syria, Libya and Armenia, russian weapons aren’t able to bring down those turkish drones ^^

Except for those 30 something they did.

AM Hants
Reply to  TopGum

Hope they also give it some exercise on the border of Ukraine.

It’s about time, i expected it to happen since late 2019. Russia needs to heavily fortify al-Qamishli Airport and it would also help triangulate targets better.

The S-400 has enough range to cover 90% of the Syrian airspace. So I wouldn’t put it near the border. Sure response time will be shorter. But its a long range weapon system, its main advantage is that it has longer range than any other SAM, they can shoot you but you cant shoot them. Putting it right near the hornets nest is a bad idea. Even if it has a 100% hit rate how many launchers and missiles do they have. 10? 20? 30? There is a good reason Russia operates thousends of SAM launchers across Russia in a layered set up, its practically invincible, cant be saturated, but thats not the case in Syria.

Nice one and a good PR exercise for the defence system. When will the S-500 be in active service? Must be soon, as they are allowing the S-400 to be used in Syria, knowing all and sundry will be snooping on them.

Has Russia ever actually used the S-400 in Syria. It just seems like a lot of smoke and mirrors. If Turkey attacked the airfield with drones, they could just say oopsy, and Putin probably wouldn’t do shit about it anyway.

They have. Not only in Syria but in Armenia as well. It performed flawlessly.

I think the S is for Shitty…. After the performance of the S-300, it’s a wonder how the Syrians got conned into buying the S-400.