The Russian government has always referred to the West as their partners, but rarely has this term been reciprocated. 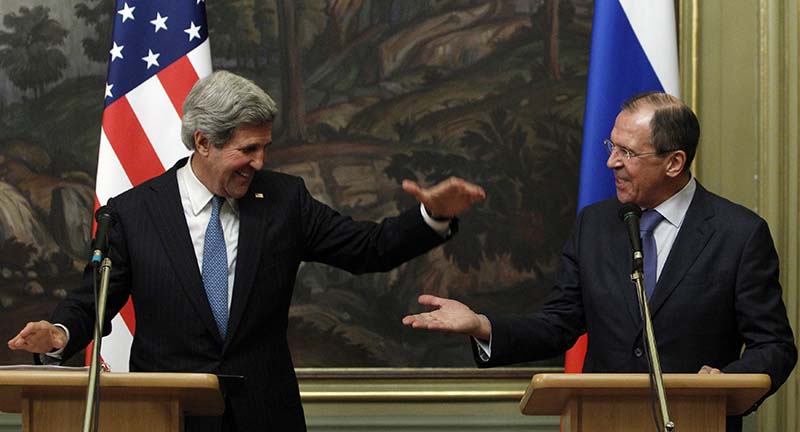 Washington calls Russia a ‘significant’ partner and wants to cooperate with Vladimir Putin in finding out those that represent reliable opposition in the country. Apparently, it looks like, the US government is working in strengthening its cooperation with Russia and Syria.

US Secretary of State John Kerry has acknowledged Russia as an ‘important partner’ in the fights in the Middle East for the first time at a meeting with his Russian counterpart Sergei Lavrov in Moscow on Tuesday. This is Secretary Kerry’s second trip to Russia, where he will not only meet with Lavrov, but with President Vladimir Putin as well.

According to Russian news agencies, Lavrov called on the US to exert more pressure on the Ukrainian leadership in Kiev to put an end to the conflict in Eastern Ukraine.

This is probably showing deepening cooperation between Obama and Putin following the Syrian conflict. The two presidents had agreed at September’s UN General Assembly in New York to cooperate in Syria. This is probably not so fortunate news for the neocons in US who still view the Russians as a mortal enemy and would sooner send thousands of ground troops to the Middle East. Turkey and their secret service are also making trouble since they’re pursuing interests other than those of the US government.

Moscow and Washington are jointly testing political solutions to the post-Assad era in Syria. We are witnessing the giving up of the extreme positions of both sides. The US government is no longer fixated on the immediate overthrow of Assad, nor does Russia want to support the Syrian President at any and all costs. The remaining question of who will take part in the future politics of Syria is difficult to answer. Therefore, the international conference on Syria planned for this week is still uncertain. Although Russian Foreign.

On the phone Minister Sergei Lavrov and his counterpart John Kerry agreed conversation on the conditions for another round of talks, the Moscow Foreign Ministry said that both politicians say that a list of Islamist Terrorist groups must first be created, in order to combat these groups successfully. What is more the delegation of the fragmented opposition has to be negotiated. This delegation would work with representatives of the Syrian government.