The capabilities of the Russian Black Sea Fleet play a crucial role in case of the possible confrontation between Russia and Turkey. 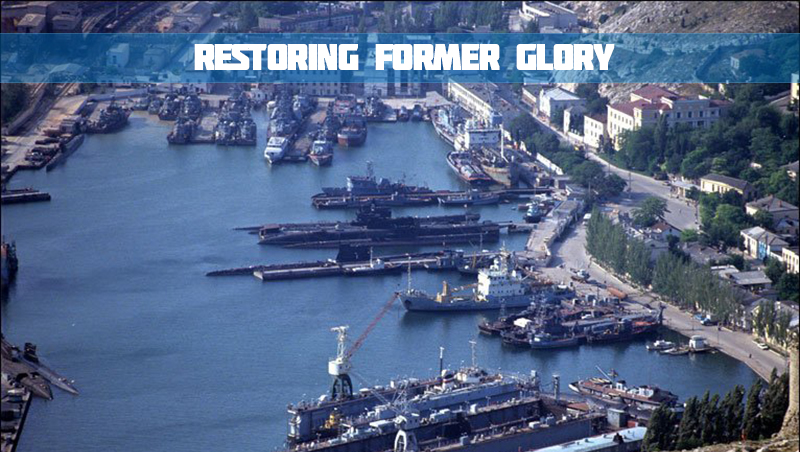 Kiev was stubbornly doing all it could to prevent the fleet’s modernisation and christening of new vessels.

Tank Landing Ship (LST) “Novocherkassk” is anchored near the legendary Minnaya wall. She’s there to “rest” before its next long voyage.

-We are almost always in the Mediterranean sea, – the captain of the ship says, captain II rank Vladimir Bolsun. – We are only in Sevastopol to restore our fuel and food levels.

This year the ship already spent over 170 days at sea, travelling almost 30 thousand nautical miles – more, than the length of the Earth’s circumference around the equator.

The city of the Russian sailors

As part of the permanent joint operational group of the Russian Navy in the Mediterranean sea there are ships and vessels from all the Russian fleets – Baltic, Northern, Pacific, but the one that is “milked” the most is the one the closest to the Mediterranean – the Black sea fleet. Together with “Novocherkassk” the patrolling duties are taken by the flagship of the Black sea missile cruiser “Moskva”, guard ships “Smetlivyi”, “Ladnyi” and “Pytlivyi”, LSTs “Nikolai Fil’chenkov”, “Ceasar Kunnikov”, “Saratov”, “Yamal”.

Russian Navy is restoring its former Soviet and Imperial glory. The permanent joint operational group essentially is faced with the same tasks that were put in front of its predecessor – the famed Soviet Mediterranean Squadron.

The fact that today the Black sea ships are successfully completing complex combat tasks far away from the Russian shores is proof that over 23 years of its existence on Ukrainian territory the fleet, disregarding all the problems it was faced with, retained its combat readiness.

During the “Ukrainian years” Kiev did all in its power to get the Russian Navy to leave Crimea. According to writer Alexander Isaevich Solzhenitsin, the removal of Black sea fleet from Sevastopol was a “lowly, evil insult to Russian history of XIX and XX centuries”. However, neither the Russian people, nor the Crimeans simply couldn’t, didn’t have the right to allow the “third defence of Sevastopol” to fail. For this would lead to the death of Sevastopol. The most Russian – from history’s perspective, and from mythological perspective, and from demographical geography, city of Ukraine. Sevastopol without the Russian Navy is like Paris without the Eiffel tower, New York without the Statue of Liberty, Egypt without the pyramids or Venice without the channels. 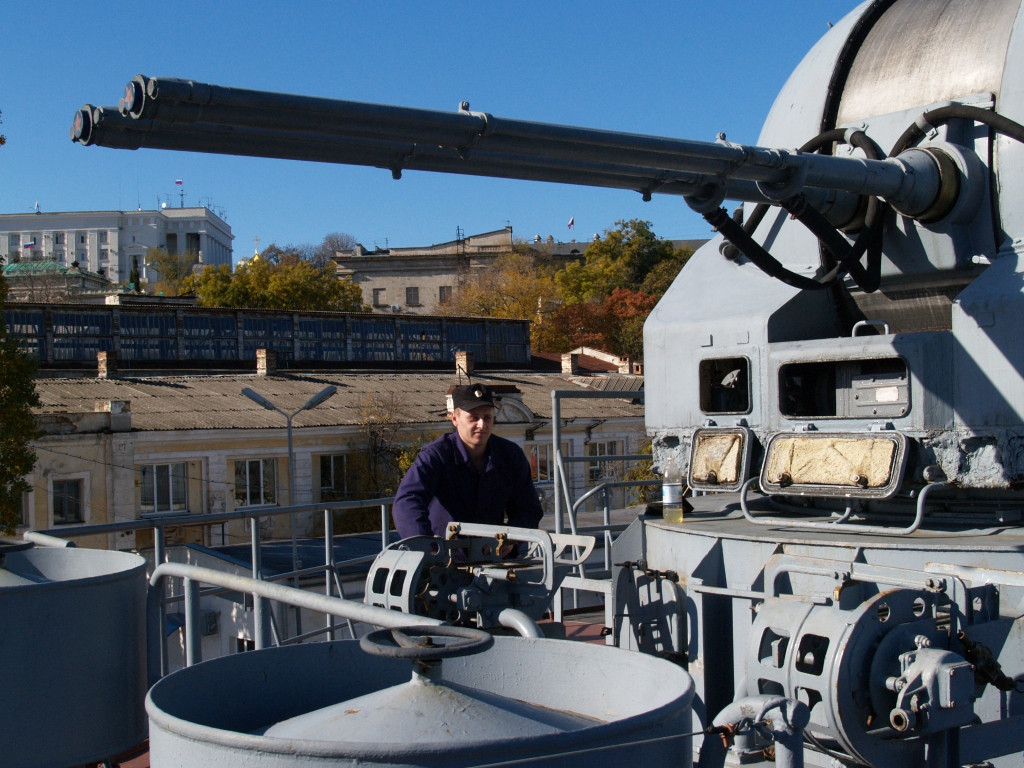 Kiev was doing all it could do prevent the modernisation of the fleet and christening of new ships. Today all those restrictions are removed. Directly opposite the “Novocherkassk” the harbour is occupied by a new “Novorossiysk” submarine, armed with the same “Calibre” cruise missiles that were fired by the Russian Navy from Caspian sea on the ISIS positions. Apart from that, new additions to the fleet include small rocket ships “Zelyonyi Dol” and “Serpuhov”. Another submarine – “Rostov na Donu” has already completed sea trials and is currently traveling from the Northern fleet home waters to the Black sea. She will assume its combat duty as part of the Black sea fleet. A newest frigate of the Russian navy, “Admiral Grigorovich” is also completing its sea trials and is scheduled to join the Black sea fleet soon.

I am asking “Novocherkassk’s” captain: when did he start believing that Sevastopol “will return to port”?

“I never doubted that for a second”, – the officer replies.

Vladimir Bolsun – is Sevastopol’s native. In 1990 he graduated from the 7th school and was accepted into the legendary Pavel Stepanovich Nakhimov naval academy, however, the Soviet Union was breaking up and Sevastopol suddenly found itself as part of the independent Ukraine. In 1992 Vladimir refused to swear an oath to the Ukrainian state and left to finish his studies in Saint Petersburg – at the Mikhail Vasilievich Frunze naval academy. And after graduating from there in 1995 he returned to Sevastopol to serve in the Black sea.

“I’m truly happy that I lived to see my native city return to Russia, – the officer explains. – It’s our land. Just walk on Sevastopol’s streets, around its streets and squares, look at all the memorials to famous Russian admirals – Nakhimov, Kornilov, Ushakov, Istomin, Lazarev, Senyavin”.

And, indeed, it was the Russian Navy for the most part that allowed Sevastopol and Crimea in general to preserve their connection to Russia and Russian history in the tough “Ukrainian years”, to save the feeling of Russia being right here, on its historical territory, not somewhere over there, behind Perekop. And, of course, we cannot forget the role the Black sea fleet played in the events of “Crimean spring” of 2014. 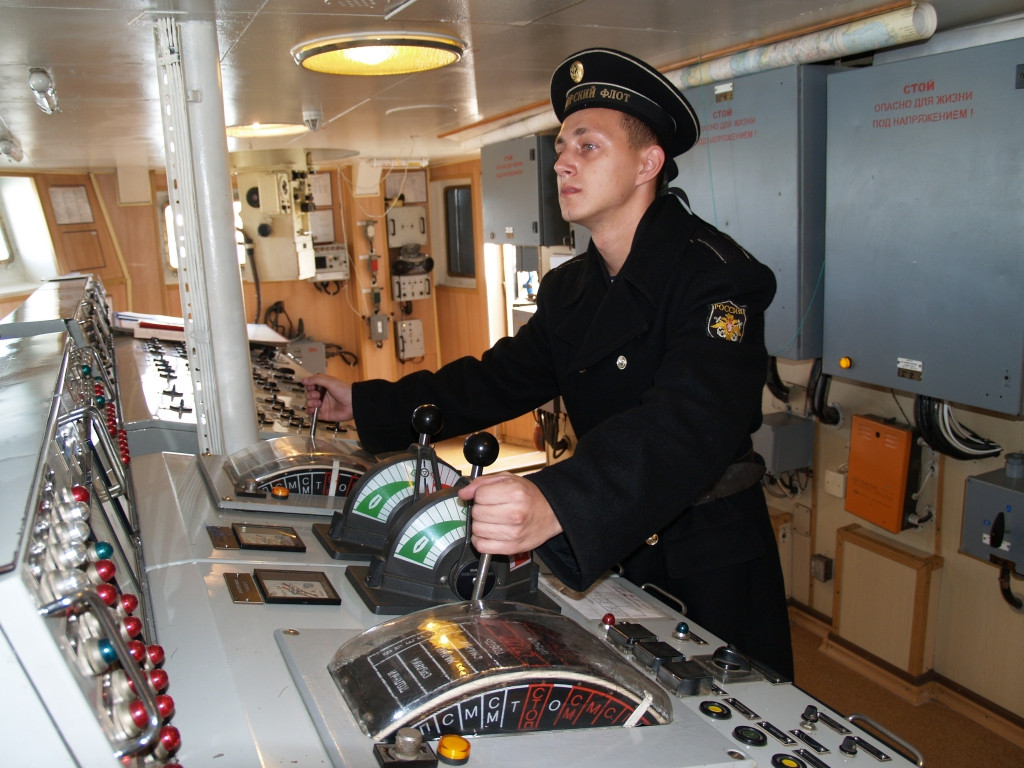 The first officer of “Novocherkassk”, captain III rank Dmitriy Kazakevich has a different life. He is from Kherson. Before Crimea rejoined Russia, he served in the Ukrainian Navy and after that, together with most other Ukrainian naval officers, transferred to the Russian Black sea fleet.

“I’ve lived in Sevastopol for 17 years, this is my hometown, – Dmitriy says. – All these years, personal interactions between the Ukrainian and Russian sailors were perfect, there were no problems, the problems only happened at the will of the Ukrainian politicians”.

Dmitriy has his parents and friends still living in Kherson. According to him, they fully support his decision and hope that the power in Ukraine will be assumed by adequate people sooner or later.

“I think, many people would have been happy, if everything was back to how it was 25 years ago, if we all again lived in one gigantic country. Ukrainians in general are not happy with what is going on in Ukraine right now and especially the war”, – Dmitriy told us.

But he cannot visit his parents and friend anymore – the Ukrainian government declared him, as well as tens of thousands of other Ukrainian naval servicemen that decided to join the Russian Black sea fleet, as traitors and have started a criminal investigation.

Among the conscripts aboard the “Novocherkassk”, there are many of those from the identically-named city of Novocherkassk. The city took it onto itself to help the Navy look after the ship and her crew. One of them is Vitaliy Rud’, a private in the Russian Navy. “At the commissioning station the offered me to serve on the “Novocherkassk”, and I immediately agreed, – Vitaliy tells. – It’s almost like I’m home”.

Private Nikita Zayarniy was conscripted from Taganrog. He is a maritime mechanic, graduated from Rostov’s maritime transport institute. Obviously, the only military path for him after that, was into the Navy. Apart from those two, there are people from Moscow, St. Petersburg, Severodvinsk, Yakutiya, Yamalo-Nenetskiy district and other regions serving on the ship. We can study Russian geography without opening a textbook.

At the moment of Soviet Union’s collapse, the Black sea fleet had over 300 combat ships and assistant vessels, including 2 light cruisers, 6 missile cruisers, tens of minesweepers, guard ships, LSTs and destroyers; around 110 thousand sailors and soldiers, and over 60 thousand workers and other servicemen. Today, according to open sources, the Black sea possesses over a 100 “colours” and personal is numbering at about 25 thousand people.