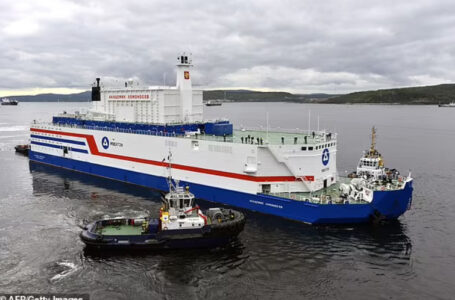 In a remote Siberian town, residents are enjoying warm showers thanks to a nuclear reactor which pumps hot water directly into homes.

Introduced into the city of Pevek just one year ago, officials installed a new generation of ‘smaller and potentially more versatile nuclear plants’ which sits aboard a floating barge in the nearby Arctic Ocean, according to DNYUZ.

The new technology, which doesn’t emit carbon into the atmosphere, is being pitched as a green innovation.

As countries from across the globe meet in Scotland this week to try to find new ways to mitigate climate change, Russia has embraced nuclear residential heating as one potential solution, while also hoping it can bring a competitive advantage. Companies in the United States, China and France are considering building the type of small reactors connected now to Pevek’s waterworks.

“It’s very exciting,” said Jacopo Buongiorno, a professor of nuclear science and engineering at the Massachusetts Institute of Technology, who added that these small nuclear reactors could provide heat to greenhouses or for other industrial purposes. “The Russians are ahead,” he added. 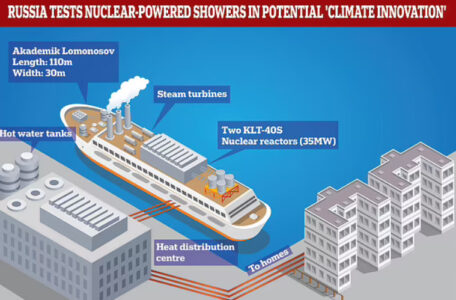 Graphic via the DailyMail

“Decarbonizing the electrical grid will only get you one quarter of the way,” Buongiorno continued. “The rest comes from all these other things.”

Buongiorno said that he’d gladly take a ‘nuclear shower,’ but admitted that “obviously this is not going to work if people don’t feel comfortable with the technology.”

Small-scale nuclear power also avoids wasting heat which is typically vented as steam through a nuclear plant’s conical cooling towers, and instead captures it for residential heating.

“It is nuclear technology, and the starting point needs to be that it is dangerous,” according to Andrei Zolotkov, a researcher with Bellona, a Norwegian environmental group, offering no other solutions. “That is the only way to think about it.”

Mr. Rozkhov’s wife (from the above example) was skeptical at first, and was “worried for the first two days” after the nuclear-heated water was piped into their building.

“Whatever is new is scary,” she said.

Read the rest of the report here.

Russia is a Nuclear Power Country. We would love to see Nuclear power Train, I bet they already had a working one now.