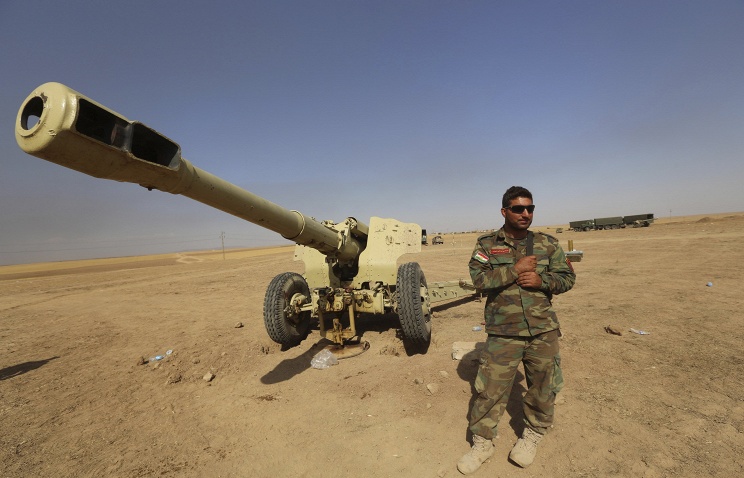 Tuesday, on January 26, Russian Foreign Minister Sergey Lavrov said at an annual news conference that the supplies of Russian arms to the Iraqi Kurds were made through official Baghdad.

He explained that, practically as soon as the terrorist threat emerged, when supplying arms to Iraq, Russia took into account the fact that both the government army and the Kurdish militias were fighting against the Islamic State terrorists.

“We took into account the Kurds’ needs in the supplies of our arms to Iraq, but these supplies were made through the central government, through Baghdad,” Lavrov Said

He also said that the decision on the Kurds participation in the inter-Syrian talks should be taken by United Nations Syria envoy Staffan de Mistura and Russia will not veto it.

“It will be the most serious mistake not to invite Kurds (for inter-Syrian talks), but we will not impose any veto,” Sergei Lavrov said in the conference.

“This is the right of Staffan de Mistura,” he added.

Russian Foreign minister also said that UN Syria envoy should be aware of his responsibility and should not shelter himself behind Russia and the United States.

The Kurds are an obstruction to the Turkey in their support for terrorists. Syrian Kurds in the areas bordering on Turkey are an interruption to Ankara in patronizing well-established routes of smuggling weapons and crude oil and in bringing to Turkey more terrorists and illegal migrants from all over the world.

Syrian Kurds are dedicated to Syria is my understanding. Iran certainly doesn’t want to see a Kurdistan either. Perhaps we will have two NATO countries fighting against each other. Turkey against Iraqi Kurds-although this being an Israeli project I don’t know what the problem is for Turkey other than an oil well and USA with Iraqi Kurds against Turkey. Given the FUBAR USA I wouldn’t doubt such a scenario. RR

I don’t believe in this scenario. Because the Kurds in Turquey also fight with the Turk government, their biggest enemy and the region with bigger Kurds population. After all this mess, I believe the Kurds will take advantage of this situation to fight for their Free Kurdistan, so they will fight againt Turkey, Iraq, Iran and Syria. Probably starting by Turkey and Syria. I don’t believe USA will pick a side into this conflict.

I think it is part of their plan B. I am just engaging in wishful thinking having two NATO countries go at it. Support for the Kurdish Regional Government and their control of Iraqi oil in that region is against Iraqi sovereignty. And as stated, Barzani is Israeli man. This situation is a FUBAR. Do you think USA does not want a toe hold to attack Iran and Syria? We will know soon enough. I can see them dropping ISIS for the more respectable goal of Kurdish Autonomy especially if it involves partitioning of Iraq and Syria. What the Kurds will go for is another story.

Yes maybe it’s a plan B. One thing I’m sure, this war is too far from an end.

You speak of Israel as the ultimate villain ready to implement some sort of sinister master plan in this geopolitical tangle. Of course, Israel has an agenda as much as any nation in the region. As long as an equilibrium exists between Israel and its Arab majority neighboring countries that surround it the better Israel will find it an opportunity to ensure its security and survival. On your accord, suppose we were to understand this as a major scheme by Israel for hegemonic domination of the Middle East. Why shouldn’t the Kurds see it as an opportunity to establish their own state? Why would they, in any way, want to stay divided within four countries that class them as sub-humans and violate their most basic human, political, and civil rights?

Syria, ever since the Assad family came to power in the 60s with the Ba’ath Party, denied the ethnically Kurdish people citizenship along with access to basic civilian services such as hospitals, medical care, and government offices. In Iraq, with the rise of Saddam and the previous government, denied them all kinds of human expression from language to cultural identity. Kurds were one of the most vital and instrumentally active participants of the Iranian revolution; yet, despite this act of loyalty on top of bitter repression under the Shah, the Mullahs didn’t grant them their rights as they ought to, but rather gave them a short lip service for their participation. To this day, Iran executes, imprisons, and denies Kurds their cultural identity, use of language, and political expression as well as religious. Turkey is to the Kurds what Germany was to the Jews during the Nazi takeover. History bears witness to these harsh realities under which the Kurds have lived for the longest as the largest ethnic minority in the world without a place to call home.

When people like you minimize a broad issue entwined in the cause for justice and conscience, it really shows your lack of empathy for human suffering and struggle. Do not misconstrue this as a extolment of Kurds to be infallible and superior, quite otherwise. When it comes to Syria’s crimes against its own Arab citizens, apologists like you retort with the inacceptable “so what, respect their sovereignty and let them solve their own issues”. However for the Kurds, the attitude is unbelievably prejudiced if not hypocritical.