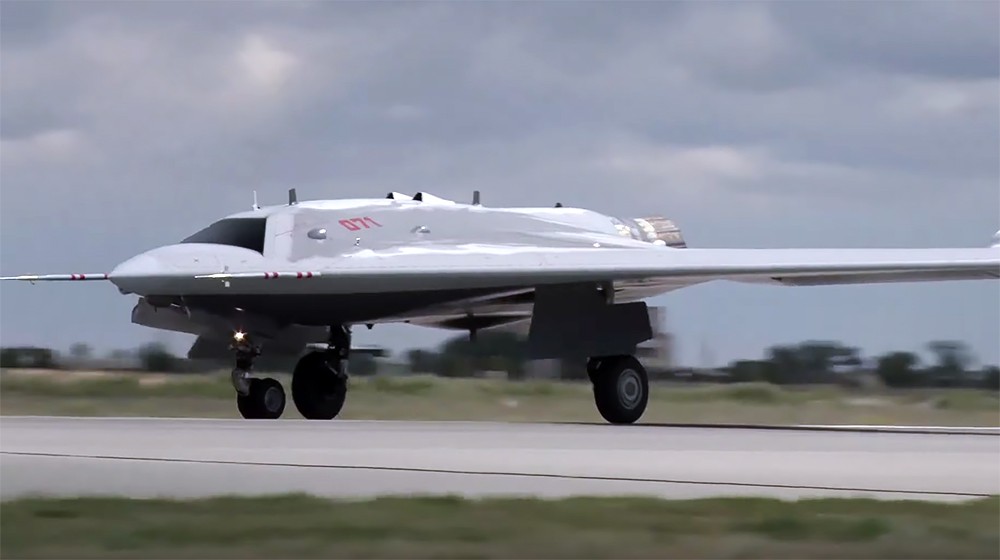 For the first time, the Russian military conducted a series of flights of the S-70 Okhotnik-B heavy attack UAV in its mode of operation as a fighter-interceptor with simulated air-to-air missiles at the Ashuluk training ground, an unnamed source in the military-industrial complex told RIA Novosti.

Prior to this, the S-70 Okhotnik-B heavy attack drone had already performed a number of flights, but during them only its flight qualities and the operation of the main on-board systems were assessed.

“From the strip of the military airfield of the Center for Combat Training and Combat Use of the Russian Aerospace Forces at the Ashuluk training ground, several flights of the Hunter were performed with functional simulators of guided air-to-air missiles. Such missiles in the combat version are designed to destroy other aircraft,” the source told RIA, noting that the tests were recent.

The source explained that the flights performed “will make it possible to assess the coupling of the drone’s avionics with missile guidance systems and the lead Su-57 aircraft.”

According to RIA’s source, simulators of missiles with infrared and radar homing heads were used on the S-70 Okhotnik-B heavy attack drone.

“The simulators have the body and all the electronic stuffing of the corresponding missile, but they lack the engine and warhead,” the source said.

The S-70 Okhotnik-B, developed by the Sukhoi Design Bureau, is to become the first heavy drone with strike functions in the Russian Aerospace Forces. The device is made according to the “flying wing” scheme with the use of materials that reduce the radar signature.

According to open sources, the strike UAV has a length of 19 meters, a wingspan of 14 meters, its take-off weight is 20 tons, and its maximum speed is about 1000 kilometers per hour. The first flight of the Hunter took place on August 3 and lasted more than 20 minutes.

There is newly-released footage, but below is the only one released so far showing a flight of the heavy attack drone.

The ozi boeing is just that,but this one is huge in potential:

If it was, China already had it.

The Russian “Grom” Drone (Valkyrie on steroids!) looks more suited for air combat than the Okhotnik:

““The outward similarity to “Valkyrie” is definitely there, but, if you look at the project, the difference becomes obvious. The Russian drone is bigger, but most importantly, it has a much broader spectrum of capabilities,” Nikolai Dolzhenkov, the chief engineer at Kronshtadt, is quoted by Russian news site Utro.ru.

The difference in the size is definitely there. Grom is described as going to have a length of 13.8 meters and a wingspan of 10 meters, as opposed to 8.8 meters and 6.7 meters of the Valkyrie. Grom’s maximum take-off weight is set to be 7 tons (2.5 times that of Valkyrie) and a payload capacity – 2 tons (4 times more than Valkyrie).”

Looks like the Su-57 is a high survivability Battlefield Airborne Communications Node. (BACN) I’d imagine for every one Su-57, over four S-70 could be produced.

The Suk 57 is more than BACN, it is an air superiority fighter with tremendous capabilities unlike the F35, the S70 can carry a good payload deep in enemy territory, while the Suk 57 would provide air to air cover with its R37 or K77 missiles.

I’d imagine the Su-30SM2/Su-35S are more likely to fill that role of being Russia’s main air superiority fighter for many years to come, benefitting from future technology transfers from the Su-57 programme, with the Su-57/60 being more of a deep-strike fighter (manned) aircraft flying as the central node of the heavy UAV’s like the S-70. The MiG-31’s replacement, the MiG-41 will be the true atmospheric air superiority machine flying higher and faster than any other interceptor ever imagined with technology that will be literally from out of this world.

I was referring to a stealth duo doing a deep interdiction, okhotnik leading the way, Suk 57 covering for it.

Most advanced combat drone and loyal wingman ever.

We built unmanned in victoria,so far so good,however in your statement imply support su-57 vs f35?my moneys on the russian varian’t simply because no matter how tops and affordable the ozi boeing will be,them f35S are the worse aircraft anyone could ever dare try to rely on as wingman (period) Besides,russian areo weapons tech = second to none,if you look at overall options in lieu?

Congrats Russia. CIA trolls and ukropnazis will cry and rage ?

Well there is plenty of work for that bad boy in Syria,they coulds tart by hunting those bastards in the homz desert.