The Russian side has started to meet commitments on supply of the Su-35 fighter jets to China. 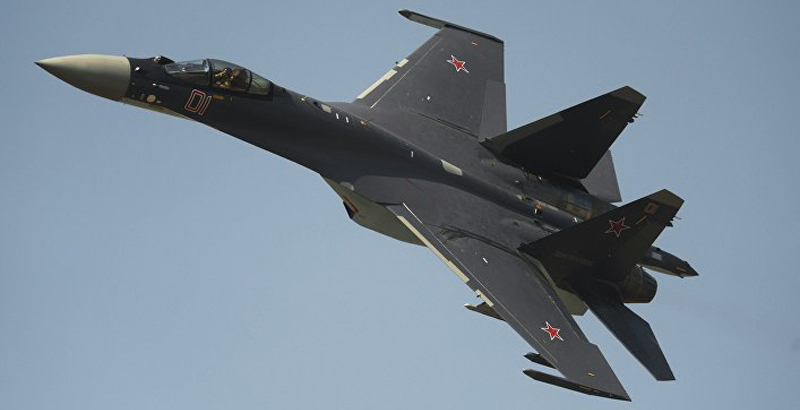 Russia has started the first phase of fulfillment of obligations of a contract with China on supply of the Su-35 fighter jets, the TASS news agency reported, citing Deputy Director of the Federal Service for Military-Technical Cooperation (FSMTC), Vladimir Drozhzhov.

“Delivery of these aircraft to China is carried out in terms, defined by the relevant contract. Now, the planned fulfillment of the first phase of the contractual obligations is carried out,” Drozhzhov said.

As the Rossiya-24 TV-channel reported, all information in cabins of the Su-35s, which Russia will supply to China, will be in Russian language. Russian developers spent about a year, trying to adapt the electronics to the customer’s language, but it was revealed that it is difficult to read Chinese hieroglyphs on crystal liquid displays of the aircraft, unlike of the Latin or Cyrillic alphabets. Therefore, Chinese consumers have decided that it will be easier to teach their pilots Russian language.

The contract on supply of the 24 advanced Russian fighter jets to the China’s Air Force was signed after the meeting of Russian President Vladimir Putin and Deputy Chairman of the Central Military Commission (CMC) of China, Xu Qiliang, held on November 17, 2015.

The cost of the agreement, including supply of surface equipment and reserve engines, is estimated at no less than $2 billion.

China has become the first country, to which Russia supplies the Su-35 advanced fighter jets.

The Su-35 multirole fighter belongs to the 4++ generation of long action radius. The aircraft is capable to reach the speed up to 2,500 kilometers per hour, the flying range is 3,400 kilometers, the combat radius – about 1,600 kilometers. The fighter jet is armed with a 30 mm cannon, it has 12 suspension points for attachment of weapons, including missiles and bombs.

It looks like the Chinese are planning to use the J-20 to do hit and run attacks over the South China sea against the U.S. navy or air refueling tankers. I don’t know if it will be an air superiority fighter. The Su-35 will likely be for near coastal defense in combination with ground based air defense batteries for air superiority.

I don’t know of 4th is obsolete. Stealth comes with a price in terms of performance. If new sensors make stealth less useful than 4th with better sensor technology might become dominant until we get unmanned hypersonic 6th generation jets.

Between all the jets you mention only F22 is in service. F35 minimal. There are four Pak Fa, a couple J20 and two J31. Hell if you leave out F22 you can count on two hands the number of fifth gen fighters. I would say the world is no where near “every where you look”. Su 35 is a great plane. Rather people like it or not numbers will count.

Generation 5 fighters are combat unproven against generation 4+ fighters. I will take Suk 35 any day against F-35, against F22 it depends on how good F22 really is.

we know russia has a very good ew ability. i think the biggest issue would be the stealth factor. we know stealth can be caught by raidars. but the issue would be whether the russian special raidars are really able to catch them from a long distance away like the russians are saying. the US are saying those raidars have such a short range their stealth plane would be already finished with their job and heading back home when russian raidars would notice them. russians are saying eveybody who stilll believe in this invisible tale would be supprised at the range of russian raidars. if the US is really confident with their stealth ability, they wouldn’t worry about russian’s s-sam defence system. but the reality is, that the US military admitts that they don’t have anything to counter those s-sam systems. so the US has not much confident with it’s fifth generation stealth planes. remember the US has a huge obssesion, fetish about stealth. they sacrifised a lot of important factors to satisfy their stealth fetish.

That is right, if F22 is so stealthy it could fly over Syria and not suffer severe consequences; what good it is to see something and not being able to intercept it? Americans are known to exaggerate and be overconfident when nothing is on line, however, when things come to a point of conclusion, their boast becomes muted. Of course, their stimulations are based on computer software developed by guessing the capabilities of the Russian S300 and S 400, not real combat where the F22’s challenged actual radar and missile installations, evading actual missiles or jamming them. By them holding back and having second thoughts, I would say they are not very confident in their equipment. Most of the US modern weapons coming through the pipeline are overpriced and have eccentric capabilities.

Josh, there is no real public available data on such subjects like how much stealth is the F-22. Most if not all you can read around is the standard marketing / propaganda bullshit Lockheed Martin and the Pentagon has spread for years. They need to have their public opinion believe that aircraft like the F-22 and the B-2 are so advanced technologically to the point of invincibility, for the only reason to justify their costs ehich, in addition of depriving the US population of basic services like schools and hospitals, increase their national debt to the point that we can expect the banner of Israel being raised on the White House at any time. Yet, one can safely assume that Russians and Chinese know the radar cross section of said planes at different wavelenghts. The planes have been around for several years, metric wavelength radars from the 50ies are known to be able to observe them (at least the F-22, the B-2 paradoxically could be less visible) and advanced models with similar technologies already are in service. Also, the US has no problem in facing cold war era air defences like the Iraki, whose more modern systems were from the seventies. facing modern air defences, with trained personnel, advanced tactics, communications and control, and advanced fighters interceptors it’s a pretty different thing. The US can’t afford to lose dozens of planes in such scenario, without any possible guarantee to win “air dominance”.

That is right, they cannot loose dozens of F22 to SAM defenses, that would be tantamount to defeat, and the primary problem would be where such planes would be deployed from? With Iran flanking S. Arabian air defenses the US aircraft would use, there would be ample time to track theses “invisible” aircraft; also if push would come to shove, Russia could deploy in Iran a few dozen Mig 31 to interdict tanker and AWAC aircraft supporting these “invisible” aircraft.

Maybe the Lockheed bs over advertising their weapons will give the neocons a false sense of security so that they can taste a bitter loss, and deflate their delusional bubble.

one thing they don’t lack is bases, they could use the RAF airfield in Cyprus, for example. Turkey would also be an option, I’m pretty sure that they’ll be able to convince Erdogan and it’s always a NATO country. There’s Greece, and I won’t exclude Jordan nor Israel as well.

But the video is unreal. I have never seen anything like that. Is it the plane, or skills of the pilot? The plane is like a ballet dancer in the sky.

Trust vectoring 3D nozzles and a very aerodynamic design allow the pilot do to such the dance in the sky.

the SU-35 has supermaneuverability + the pilot seems very experienced and skillful, so I’d say a combination of both

They are apparently developing a new engine for the JSF.