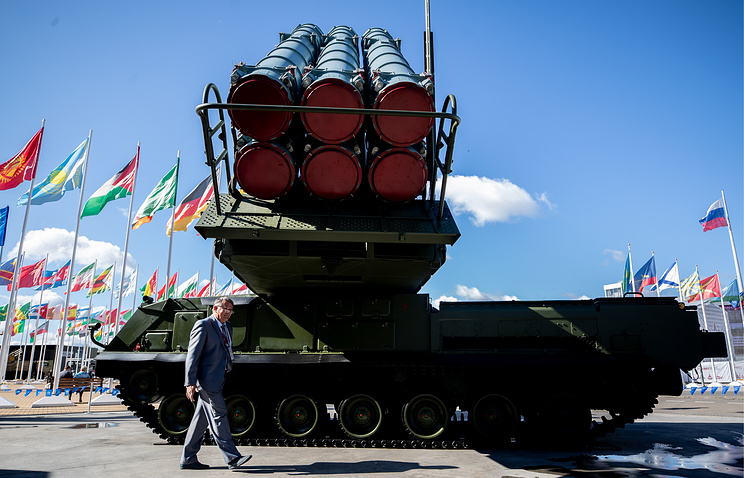 The upgraded TELAR was showcased at the International Military-Technical Forum Army-2021 that opened its doors on August 22.

The new optical tracker, which appears to be equipped with an infrared camera, a day camera, and a laser range-finder, is housed in a gyro stabilized gimbal platform.

Almaz-Antey also showcased at Army-2021 the export version of the target acquisition radar for the Buk-M3, the 9S38E. The radar can detect aerial targets with a maximum range of 200 km.

The air-defense system has an effective range of 70 km and a maximum engagement altitude of 35 km. The systems’ 9А317М-E TELAR can be armed with up to six 9M317M missiles.

The Buk-M3 has already entered service with the Russian military. Egypt was reportedly the first customer of the system. The TELAR and acquisition radar showcased at Army-2021 were painted in Egyptian military camouflage, which suggest that Egypt has either received the system or will receive it very soon.

Optical seeker makes it a 100% jam resistant in the terminal phase. Nice 🙂👍

Nothing is 100%
Reply to  Corrupt Ukrop SHITHOLE

Nothing is 100%. Even simple counter measures can reduce effectiveness significantly.

For example Infra Red sensors can be overcome / over loaded by old-school flares, laser rangefinders can be defeated / confused by reflection from old-school chaff, and when violent manouvers by the target are introduced and combined with the above, hit rates are reduced – even with “smart” shaped charge warheads that explode at the anticipated target location as determined from ground radar.

A whole host of modern “active” counter measures such as radar jaming, laser fogging, target spoofing, and target decoys can be combined with the passive to help evade a missile.

The multi-layered counter measures employed by the IDF are worth looking at too as they combine both low tech and high tech, something I am sure the Russians are learning from, for if/when the time comes to target the launch platforms as opposed to the deployed payload.

The most important thing is the one who command and operated the equipment, the more stupid they are the more useless that equipment even they got the most advanced sophisticated tech available to them. Like pantsir which got blasted when they left in offline mode while moving or park in garage like in libya or left after it empty all of its ammunition without cover while reloading in syria or using old decomissioned refurbished osa in nagorno and many example when good weapon end in stupid operator then got bad rep because of it. So high tech cant help if the operator is stupid like rock

Actually it’s Russian military technology that has provided all the toy’s you mentioned to it’s force’s, as no other country has developed any of these that are in fact in service. I am sure Russia knows what it’s doing, and doesn’t require, or desire assistance from a pitiful troll.

Well, some are in service. Please have a look at the German company Hensoldt and read their yearly report for 2020.

Selbstdenker
Reply to  Nothing is 100%

Im a sure the multilayered counter mesures of IDF work as goof as their Iron dome?

Iron Dome is designed to fire shrapnel bursts at unguided homemade rockets. In reality, that is a pretty low-ball set of technical design parameters, especially since they sucked up a $ billion from US to build the thing. They also need US cash to even operate it, they are currently demanding sufficient monies from Biden as to restock their now used up missile stocks. This design doesn’t seek to have the complexity or reliability to directly hit the targets, just to get close and shower shrapnel bursts against very low-end, slow, small workshop made targets – steel tubes packed with solid fuel. It’s political masters give it the optimistic rating of 86% chance of hitting one. Iron Dome is as much a political project as a military one, and rather predictably was built at US taxpayers largesse.

Michel LeBlanc
Reply to  Nothing is 100%

Idf can barely intercept flying trash can, what planet do you live on?

This bukm3 has been used alot as anti semitic missiles, stopping idf attack in its tracks.

Tell me son, what kind of cruise missile.carries.chaff whith them?

Tell me how many jinks a glide bomb can do before it drops out of the sky?

Its the other way around, it is idf prodding and learning from russian air defense, as it it prodding syria almost everyday.

Will make short work of any western drones and many fighter aircraft with 35km attitude.

Maybe with any luck, the SAA will be sent a few of these upgraded units?

Why they dont mount optical tracker on Pantsir ?

I got to give Putin credit for working on removing US air and sea threats for the past 20 years. While the US continued to spend money on failing ships and fighter jets, Russia constantly worked on systems that would destroy US toys. The result, if the US would attempt to attack Russia today, as RAND stated, “they would get their asses handed to them”.

Putin is the type of leader that the western world can only dream of having because countries like the US, UK, France, and Germany just to name a few, are completely controlled by big corporations and billionaires.