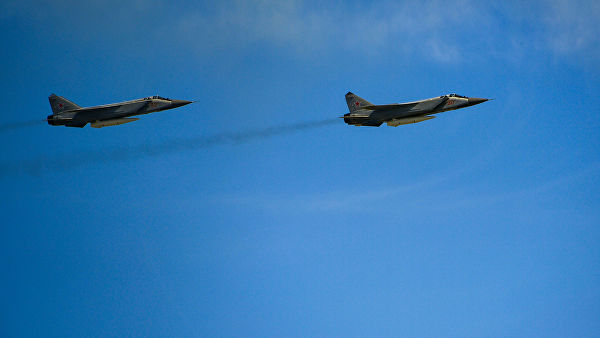 On February 15, Tu-22M3 strategic bombers and MiG-31K fighter jets were deployed at Russia’s Hmeimim Air Base on the Syrian coast.

In a statement, Russia’s Ministry of Defense said that the bombers and the fighter jets will be taking part in the Russian Navy’s Mediterranean drills.

“The long-range aircraft involving Tu-22M3 bombers and MiG-31K fighters with Kinzhal airborne systems have deployed to the Hmeimim airfield for participation in the naval drills of the Russian Navy’s inter-fleet task force in the eastern Mediterranean. The crews of Russia’s Aerospace Force have performed flights from their home airfields, covering over 1,500 km. During the exercise, the pilots of long-range aviation will accomplish assigned missions,” the statement reads.

The deployment of the bombers and the fighter jets in Hmeimim Air Base coincided with a surprise visit by Russian Defense Minister Sergey Shoigu to the Syria.

During the visits, Shoigu discussed military-technical cooperation and counterterrorism with Syrian President Bashar Assad. The minister also informed Assad on the drills in the eastern part of the Mediterranean Sea.

“Sergey Shoigu and Bashar Assad held a meeting to discuss various issues of military-technical cooperation between the countries as part of the joint fight against the remnants of international terrorists and certain aspects of Russian humanitarian assistance to the Syrian population suffering from the restrictive sanctions imposed by the US and Western countries,” The Russian Defense Ministry told reporters, according to the TASS news agency.

After meeting with Assad, Shoigu headed to Hmeimim Air Base where he inspected Russian forces, heard a report by commander of Russian troops in Syria Roman Berdnikov and laid a wreath to the bust monument to the Heroes of Russia who died in Syria.

The deployment of strategic military assets at Hmeimim Air Base and Shoigu’s visit to Syria came amid high tensions between Russia and the NATO over the crisis in Ukraine.

MOTR ON THIS TOPIC:

Like they did at Al Asad base in Iraq,i want that to happen in Syria then they will have something to cry about.

European powers should arise though. America is declining and the threat of radical Islam is always there. Something needs to be done.

I wanna see you try

I don’t need to lift a finger when the turdks are working overtime to wipe out your subhuman race.

Rest assured though, if need be, we’ll repeat the Latin Sack of CUCKstantinople, though this time in Athens (after all, I am a Lombard/Norman Italian by descent, so only fitting I follow in the time-honoured tradition of gayreek genocide as my ancestors did).

You really are a clueless shitskin, aren’t you? Normans had a state in Italy, both on the peninsula and on Sicily.

My paternal side is of Lombard origin while my mother descends from some knight who became a minor noble of Norman origin.

Dunno about him but you definitely are a clueless shitskin. Originally there were no more than a few hundreds Normans in Italy, it was ruled by Arabs and Greeks for centuries. Entire Europe and Africa raped Italians for 2000 years, you only got your state thanks to France, but now you bitches are owned by Yanks. Biggest cowards and cucks in history, same as so-called ‘australians’, fake nation of inbred British criminal scum used as a cheap cucks by Brits and Yanks (and their jewish masters).

Knights and nobles??? Bwahahahahahoho!!! you stupid twat don’t even know what poor dog buttfucked your cheap mother in pakistani brothel, wtf you know about knights 1000 years ago?! Fuckin idiot. You are just a dumb donkey turd with a single digit IQ point and laughable inferiority complex (among all your other mental problems and diseases)

Shitskin juan menendez, the cognitive dissonance is quite strong with you. In one paragraph you address me as an Italian and spew venom against them and in another I am a turdk/porki. Which is it then, you greasy taco-munching sewer swilling brown turd?

I never said all of Southern Italy and Siciliy became Norman – I said I trace my lineage back to Normans. That muttblood beaner IQ isn’t high enough for you to comprehend the Queen’s English and amerikwa’s education intensifies the problems.

As far as rape babies go, amerikwans take the cake since you’re a shitbreed of mutted-out goblins jumping up and down the length and breadth of the americas with nigger, sewerberoid (read siberoid; kek, same oompa loompa component as moskals), kikeroach and bottom of the barrel European DNA.

That tongue runs a mile ahead of your mouth and your short cock given the amount of nigger and beaner DNA that went into making your mongrel bloodline of bastard goblins. A nut-cutting and pussy-raping for amerikwa is long overdue.

Sorry, gayreeks love play-acting their “muh ancestors” much more than any other ethnic group barring niggers.

You are talking about Greeks and blacks all time. Maybe you need some heat?

No, I just need gayreeks and niggers brutally castrated together.

You will need some fun with them

Sure, I will enjoy emasculating them with razors and piano wires.

Maybe they will leave you pregnant.

No, but gayreek whores do periodically shit out bastards every 9 months after some tourist paints the inside of their country walls.

Aussies are masters at that, even the lesbo ones.

I gave a finger to your mama. And not just a finger 🍌 😀

Keep sucking turkish dicks, dumb tranny bitch. No ‘white-racist’ support turks, only muzzie shemale shiteaters from pakistan pretending to be European. When you finish with turks go clean Aussie assholes with your tongue instead of toilet paper. That’s what wogs do in Brisbane, clean garbage and clean their butts.

You haven’t given your little cuckstick to anyone because nobody need a little cigarette stub-sized pindick.

Spicdriguez, I view turdkish wogs on par with gayreek darkies; up close, they look indistinguishable from one another. Extricate your kisser from the niggers’ turd-covered arses first and stop getting shafted by the kikeroach know while chinks diddle your hairy sphincter, you fag-pandering troon-coddlers.

I’d happily snap your little mongrel dicklet in two and bugger you with it till you bleed out the bunghole, wankee doodle cunt. Who knows, I’ll even get on top of your woman and ram her puss till it’s whallered and gaped too deep and wide for you to fit inside comfortably.

You are Lombard /Norman as much as I am Eskimo. You are just an Israeli or Muslim , likely Pakistani 18year old troll.