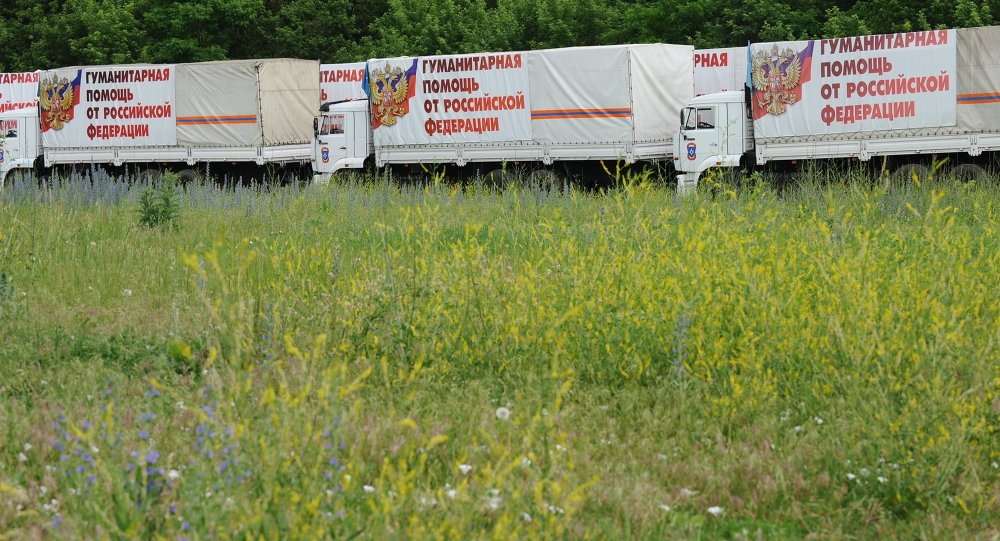 Russia’s 37th humanitarian aid convoy for residents of Ukraine’s Donbass is heading for the Donetsk and Lugansk regions.

Russia’s 37th humanitarian aid convoy for residents of Ukraine’s troubled southeast (Donbass) is heading for the Donetsk and Lugansk regions, a spokesperson of the Russian Emergencies Ministry said early on Thursday.

“At 04:00 Moscow time [01:00 GMT] the Russian Emergencies Ministry convoy with humanitarian aid for Donbass headed from the [Russian] Donskoy rescue center in the Rostov region toward the border [with Ukraine],” the spokesperson said.

The convoy is carrying over 1,100 metric tons of aid including food, such as flour, tea and grains, as well as school and university textbooks for Donbass students.

At the border with Ukraine the convoy vehicles will split into two groups, one of which will head to the southeastern region of Donetsk, while the other one will go to Lugansk.

The Donetsk and Lugansk regions have been severely affected by fighting between Ukrainian troops and Donbass independence supporters, which started in April 2014 when Kiev launched a military operation in the region. In February 2015 the two sides agreed to a ceasefire, however, sporadic fighting has continued in Donbass.
Overall, Russia has sent more than 44,000 metric tons of humanitarian aid to the region since August 2014.
Russia has also taken part in key peace talks on Ukraine, including the February Minsk meeting, which led to the breakthrough ceasefire agreement.