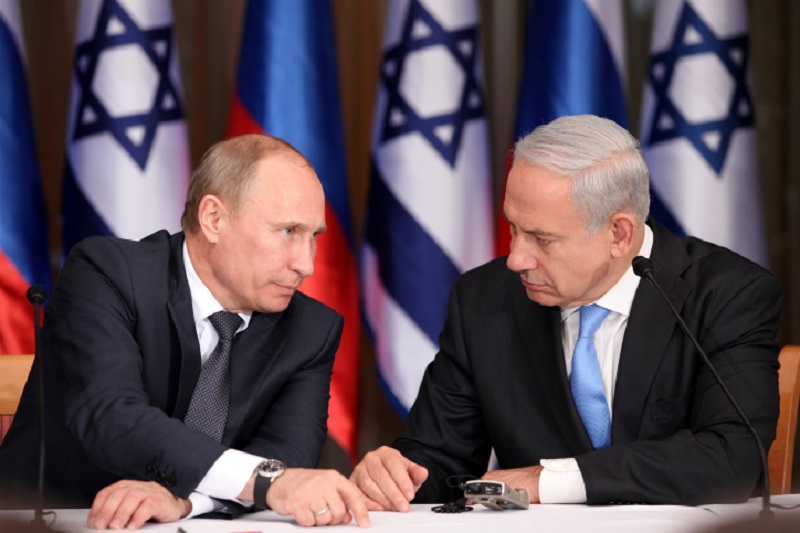 The US and Russia rejected an Israeli request to prevent the presence of any Iranian forces or Iranian-backed militias near the Israeli border as a part of the ceasefire agreement in south Syria, the Israeli Haaretz newspaper reported on Thursday.

According to the report, Israel demanded to create a 60-80km wide buffer zone inside Syria against Iranian-backed forces. The supposed buffer zone would spread from the Golan Heights to the west of the Damascus-al-Suwayda highway in southwestern Syria.

Israel proposed its idea to Russia and the US during the talks that preceded the cease-fire agreement in southern Syria. According to the report, Russia refused the Israeli proposal, while the US didn’t back it for real mostly.

However, Russia promised Israel that the Iranians and their allies will not move any closer to Israel than five kilometers in the areas held by the Syrian government. The report noted that no Iranian presence was notified on the frontline with Syria for months now.

So far no real attacks have been launched against Israel by Iranian forces or Iranian backed militias from inside the Syrian territories. However, Israel insists that the Iranian deployment in Syria is a great threat to it.

Israel is likely trying to make a place for itself in any possible political solution for the Syrian crisis. For Israel this could happen by making it self a side a negotiations over the future of Syria.

Another option is to participate in the war. Israel used this in Lebanon in 1982 to impose a peace treaty on the Lebanese government. However, it’s ended up very bad for Israel back then.

Yep! And UN resolutions. Like handing back the Golan to Syria.

And abiding by the UN Resolutions for a Palestinian state.

And maby Get them to say that they have a LOT of A-B-C Bombs.

Russia and Syria should demand Israel to leave Golan per UN res.497. As for Iranian present in Syria is up to Syrian government not Israeli ones to decide.

Israeli refugees should keep themselves 60 Km away from Golan Heights. So then there will be no conflict between Israel refugees and Syria.

Oh, looks like things did not work out for the Zios. And the baby-killer, Nit-and-yahoo (Netanyahu) is crying once again while he sits on the toilet. I Must say I am very pleased. Can’t wait for Hezbollah to take back the Golan and march on Jerusalem. It will happen. As the war mongrel, Kissinger, said: Israel will not exist in ten years. Of all brutal characters, he is one that should know. Well done, men and women of Syria, of Iran, of Hezbullah . . . of great Russia and all those who fought against the evil of Israel and its western proxies. I hear the last of the ISIS head choppers are making their way to the Arctic to hide among the penguins . . . they look like penguins so they should blend in and hide among them like a lot of them had tried to hide in burkas but their awkward gait in high-heel shoes gave them away. Unfortunately, for them, there is nowhere to hide from the polar bear . . . what a suitable ending for each one of them. But, in an ISIS case, perhaps the polar bear might well be choosy about what he eats . . .

You are being very unkind to Penguins. The best place for ISIS fighters to go to would be California. There is lots of sun and sodomy but sadly not many virgins over 12 years old.

Israel has no part in any Syrian negotiations, losers do not get anything.

So far they have done their best to make the conflict worse.

Rob are you saying ,”it is those Damned White guys again,”?

Nope, I lived on the Southernmost tip of Lebanon on the border with Israel and no Israeli presence at all. Just an occasional U.N vehicle passing by every 2 hours or so.

yes, the map is older. i meant the UN zone

I don’t think the UN actually controls those UN zones. They’re present but they’re not in charge.

I am sure there are plans to return the Golan back to Syria.However, this might take a while. Once the war is over and ISIS is vanquished and SAA and Air force is restored to an adequate strength, then the time will be right to engage Isreal over Golan. Either through diplomacy or force. I suspect though Isreal will not want to part with the Golan so easily and find a way to become more involved in the Syrian war beyond the air strikes they have been making. It’s a tough pill for the SAA not retaliating for the Isreali strikes, but it’s the best move for now and wait till the have the strength to retaliate.

And engage Israel over Palestinian rights too. Palestinians, with their own brigade from the refugee camp in Aleppo, played a major role in liberating East Aleppo, and Palmyra and other places. Syria has always been a patron of the Palestinians. Now, they owe them even more.

This victory for Syria is going to have much bigger Geo-political implications than what most people are aware of. The neocon-Zionist control over the World has now been forced to retreat. It is a watershed moment. And, all of it thanks to Russia, who put a dagger into the heart of the neocons.

Good point ….. Also consider that this alliance between Russia, Syria, Iraq, Iran, Lebanon (Hezbollah) and now Turkey (a new Russian missile defense) , could be permanent. And even China wants to be a part of it. Russia already has a trading block with most of the former Soviet states.

Some of these Eastern European countries are going to wonder why they joined the EU, with all the forced EU restrictions and refugee resettlement requirements.

Did Putin plan this all out ahead of time? If so, this guy is the smartest guy on the planet. He got revenge for what the neocons did to the Ukraine several times over. Now, the message to the world is, don’t mess with Russia. Previously, the message was don’t mess with Israel because they control the World’s only Super Power.

Justice demands the end of the zionist colony in Palestine, to complete the anti-apartheid hat-trick. Until American Caesar decides that the zionists are superfluous, military means are futile. For the moment peaceful means are the only practical ones so keep gobbing on them, the fascist bastados.

what kind of crack is israel smoking, that it thinks in can tell syria to kick iran and hezbollah out of its country? they are allies, OF COURSE theyre going to be helping syria. poor little israel just needs to accept this fact and shut its trap loool

Iran and allies are guests and we don’ t forbid our guests to use the whole house.

Don’t be so sure of that Ivan,although the majority of Young folks do not support Israel, our President seems out of our control.

What does it mean “the us didn’t back it for real, mostly”? I assume the Pentagon is thinking for itself and doesn’t want to be Israel’s bootlick, like many presidents. But why would the Pentagon agree with the Russians on anything?

Israel is already occupying parts of Syria (Golan heights) and also wants the whole of Syria but after syria and it’s allies finish off israeli backed mercenaries, Golan will be next to be liberated

Israel should LEAVE Golan Heights or prepare to bury their “soldiers”.

Excellent answer of Russia to Israel government. As I mentioned some time ago, if Russia does not stop Israel (USA), nobody in the World will be able to stop her. Russia must demand UN the creation of the State of Palestina right away.

What Russia does in Syria is none of Israel’s business! Israel and the US are in Syria illegally according to International Law while Russia is invited and inside Syria legally. If Russia and Syria blow Israeli and US planes and troops to HELL…too bad!!!