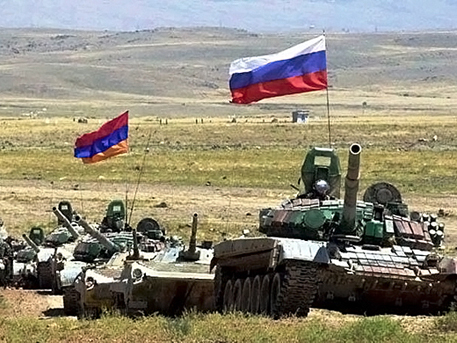 Original by Dmitriy Sergeyev published by Zvezda; translated from Russian by J.Hawk

The past year was a year of renewal for the 102nd Military Base located in Armenia. The Erebuni airfield, which is a part of the base, received new Mi-24P and Mi-8MT helicopters. Their crews already tested the machines in the air, conducted scheduled flights, performed the required exercises. Moreover, 2016 will see the arrival of a new batch of MiG-29SMT fighters. Technical support personnel has already arrived to prepare the airfield to receive the new equipment.

Armament of other formations assigned to the 102nd is also being upgraded. Scouts obtained Takhion reconnaissance drones which are manufactured in Russia and which can operate in any weather or time of day at ranges of up to 40km. Their operators underwent training on the new equipment at the Kamkhud and Alagyaz high-mountain training areas. There are also novelties for the motorized riflemen. They are getting acquainted with Ratnik systems, which turned out ideal for mountainous terrain since it includes both winter and summer camouflage kits which permit to operate effectively in high mountain areas and in temperatures between -25 degrees Celsius to +45 degrees.

Russia’s military presence in Armenia dates to more than 200 years ago. In November 1804, a Russian detachment commanded by General Sergey Tuchkov, the first deputy garrison commander in Gyumri, defeated Abbas-Mirza’s Turkish forces. This victory led to the establishment of a garrison. In 1834 Tsar Nicholas I approved the future garrison design, including the Bolshaya fortress which even today is the most important facility used for stationing Russian forces.

Since 2010, the unit has been designated as the 102nd Order of Aleksandr Nevskiy Military Base. Its status is the subject of an intergovernmental treaty, and in 2010 the treaty has been extended until 2044. Armenia does not collect any money for Russia’s use of military bases, only for utilities.

The local inhabitants is views the fact of Russian presence in a positive light, even though the relations have been affected by last year’s tragedy when an absent without leave soldier killed a local family. The murderer has been put on trial, while the base commander and a number of other officers have been relieved.

At the same time, it is Russian troops who were the first to come to the aid of local inhabitants during emergencies. For example, in 1988 when dealing with the Leninakan (or how Gyumri used to be named) earthquake. Recently the troops from the 102nd cleared roads blocked with snow following a powerful storm, using dozens of heavy vehicles. But the Russian troops’ main task is ensuring the country’s security within the framework of the Collective Security Treaty (CST).

At the Russian MOD collegium session held in December 2015, Sergey Shoygu named strengthening cooperation among CST countries, within the Russia-Belarus alliance, the CIS, and the Shanghai Cooperation Organization a major priority for the ministry.

In late December, Russian and Armenian ministers of defense signed an agreement on a unified air defense system for the Caucasus collective security region. Sergey Shoygu and Seyran Oganyan also launched the 2016 bilateral defense cooperation plan. Literally only a few days ago the Russian-Armenian intergovernmental commission on military-technical cooperation held a meeting to discuss establishing in Armenia a multi-functional technical servicing and repair center for air defense weapons, a regional helicopter repair and servicing center, and the question of military equipment deliveries under the military-technical cooperation treaty.

According to the Russian military expert Igor Korotchenko, by strengthening its ally Armenia, Russia is pursuing the objective of countering regional threats. As far as upgrading the base is concerned, Korotchenko believes “it will increase confidence in security guarantees by ensuring that any aggression, no matter who launches it, will be dealt with. This is what will ensure security in the Caucasus.”

Korotchenko, underscoring that “security cannot pose a threat,” is confident that strengthening the 102nd is mutually beneficial for the two countries and furthers both Russian and Armenian interests. At present, Armenia’s security could be threatened by Turkey, whose relations with Russia are currently tense. Moreover, Igor Korotchenko believes that strengthening the base does not mean that Turkey represents a clear and present threat. “It’s a matter of buying ‘insurance'”, Korotchenko notes.

Regional politicians also tend to believe that the Russian base in Armenia, and the close Russia-Armenia relationship in general,  stabilize the whole region. Such opinion was expressed by Armenia’s former Minister of Defense Vagarshak Arutyunyan. “History shows that relative stability in the Trancaucasus was always associated with Russian presence. To avoid war, Russia has to be here. Both Baku and Ankara understand that no conflict in this region can be resolved without Russia’s participation,” Arutyunyan believes.

Local analysts do not believe the improvements at the 102nd Military Base are connected to the worsening of Russia-Turkey relations. Political expert Sergey Minasyan points out that enlarging the Erebuni air group with modern Mi-24P attack helicopters and Mi-8MT transport helicopters was decided already in 2013. “It was a planned reinforcement, and Armenia’s government provided them with flight pads in accordance with the base agreement,” Minasyan notes.

Even NATO representatives have stated that Russia’s actions are not related to possible measures against Turkey. James Appaturai, NATO GenSec’s special representative to southern Caucasus and Central Asia said that the statement suggesting tensions between Russia could lead to Turkey striking Russian military bases were “baseless speculations”

A Russian political expert, Dr. Aleksandr Gusev, underscores that “Russia never threatened Turkey and always considered it a friendly state, maintaining good neighborly relations. Although recent event have shown it’s not the case, mainly because of the Turks.” At the same time, Gusev notes that “in spite of certain problems in the bilateral relations, Russia is attempting to act in a dignified manner in its relations with the Turkish Republic.”