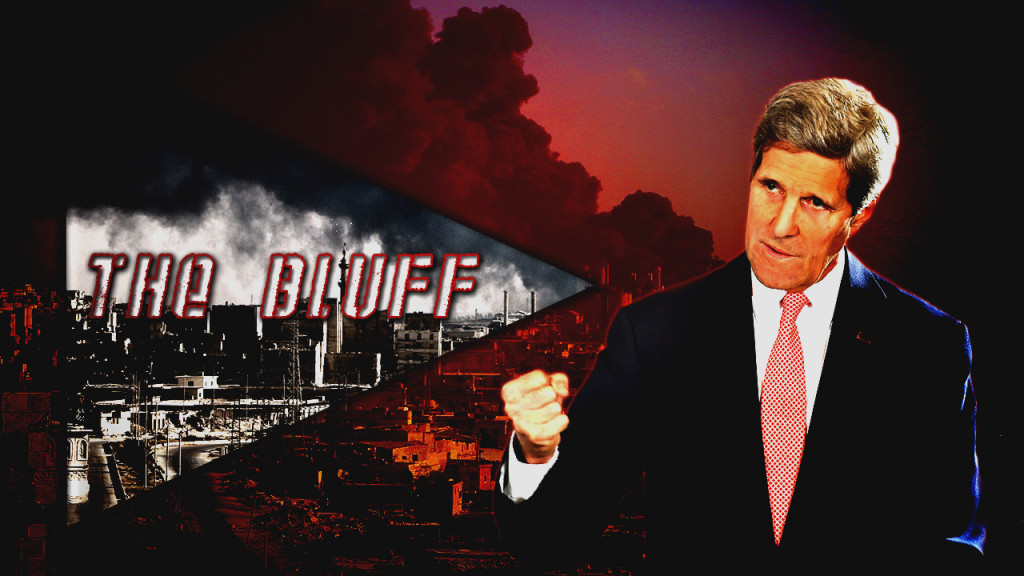 “Any way, if somebody refuses to leave [Aleppo] on good terms, he will be eliminated as I understand. There is no other way out,” Sputniknews quoted Lavrov.

At the same time, there is no progress with the US-Russian agreement on the withdrawal of militants from Aleppo. Last night, the US just declined its initial proposal on Aleppo and notified Russia that consultations cannot begin on Wednesday.

“Suddenly, last night we receive from them [the United States] a message that they, unfortunately, will not be able to meet tomorrow [on Wednesday in Geneva], because they changed their minds, their document was withdrawn and now they have a new document, which… changes everything back, and again looks like an attempt to buy time in order to let militants replenish supplies and take a breath.” the Russian foreign minister added.

“We have an understanding that having a serious conversation with our American partners does not work. The same thing happened with our agreements with Kerry on September 9, that have already been reached and came into force, and then the United States began to look for excuses to abandon it, and eventually found a pretext, and have announced that they are out of these agreements. Now we see a very similar situation: what was proposed by the Americans on the paper, and what has been publicly supported by us now is not suitable. It is difficult to understand who decides there [in Washington], but apparently, there are many people who want to undermine the credibility and actions of John Kerry.”

So, Kerry’s proposal of talks on withdrawal of militants from Aleppo was just a bluff.

On Monday, Russia and China vetoed a draft resolution of the UN Security Council (UNSC) that would have demanded a seven-day truce in Aleppo.

“These kinds of pauses have been used by fighters to reinforce their ammunition and to strengthen their positions and this will only worsen the suffering of civilians,” Russian U.N. Ambassador Vitaly Churkin said.

Churkin emphasized that the draft resolution was pushed with the breach of order of the UNSC:

Two circumstances. We believe that the vote cannot take place today because for whatever reasons the draft resolution was put “in blue” at 11:20 this morning. It was announced it would be put “in blue” on Friday night, but the actual process of “putting into blue” took place today and so procedurally it has to be 24 hours, so the vote cannot take place before 11 AM tomorrow morning. Substantively there is an important reason for members of the Council to think about it because this draft resolution is not in line with what was agreed between Sergey Lavrov, our Foreign Minister, and John Kerry when they met on December 2.

On Tuesday it became clear that the attempt to push this draft resolution ingored the US-Russian talks on Aleppo because the US was set to withdraw its proposals.

Furthermore the breach of order marks the ongoing desintegration of the UN as a useful tool of the international relations. The “global elites” use it just to push own agenda.

In this case, it’s important to note that China and Russia both vetoed the draft while one veto vote was enough. This means that the Chinese and Russian lederships have a common understaing of the situation.

There have been many ( in fact too many) opportunities for the militants to leave Aleppo safely. The time for this has now long passed. There is now no better way other than to push on for a total victory for the SAA in Aleppo.

The ones that are left are way too dangerous to move to Idlib. They should be massacred, I hope this happens.

Only total human trash remained like those Zinki child beheaders. So they must be all exterminated without mercy!

The ones that are left desire a ‘Mad Hitler in his Berlin bunker’ style Götterdammerung ending. They sure as hell aren’t going to leave because Kerry will ask them. That ship sailed so long ago it has already reached its port on the other side and its crew are busy with hookers.

Chances are though that as the remaining Jihadists get pushed into a tinier pocket the control of the hardliners will degrade to such a point that the doubters will feel embolden enough to surrender. I wouldn’t be surprised if the streets of the East Aleppo pockets are lined with the corpses of brutally murdered Jihadists, who had tried to flee, just to keep the rest in line.

You re right, as morale plummets, infighting will increase, they are doomed anyway.

Or they end up putting a bullet in the commander’s head, and walk on out and surrender.

What Russia was expecting from the United States? It is incredible how ingenious the Russians are, they still believing as little children in the words and promises of the United States after all the unfulfilled and deceitful they have been throughout the war in Syria. I love you russia but wake up and lead on your own making your own decisions. Because you are and you are worth much for yourself

The original Sec. of State Kerry proposal was not a bluff. As the Russian news (TASS and RT) reported:

“…It is difficult to understand who decides there [in Washington], but apparently, there are many people who want to undermine the credibility and actions of John Kerry.”

“One has the impression, he went on to say, that Washington tries to discredit Kerry’s statements and actions after the aforesaid agreements had been concluded at meetings with him.”

“Kerry delivered a new plan for an Aleppo settlement to the Russians on Friday. Lavrov earlier said that the plan involved the withdrawal of all US-backed rebel forces from eastern Aleppo to Idlib province, with everyone remaining designated as terrorists and legitimate targets for the offensive of the Syrian Army. On Tuesday, the US and Russia were supposed to discuss particular details of the withdrawal.”

This was done in the Sept. 9, 2016 agreement when the US and Russia were going to have joint military operations against ISIS terrorists after 10 days of a cease fire. Some one inside the Obama administration decided against that and had the US and it’s allies bomb Deir ez-Zor killing the agreement and 100 Syrian soldiers.

Sec. of State Kerry, since this spring, has maintained that anyone staying in east Aleppo after a declared withdrawal of the “moderate rebels” would be designated a terrorist and a legitimate target of the Syrian Army. Unfortunately, he is always overruled.

Obviously an Obama administration in disarray.

The Syrians are not going to stop their advances in east Aleppo for some fake cease fire and there will not be any “moderate rebels” to negotiate about. It will be over in days.