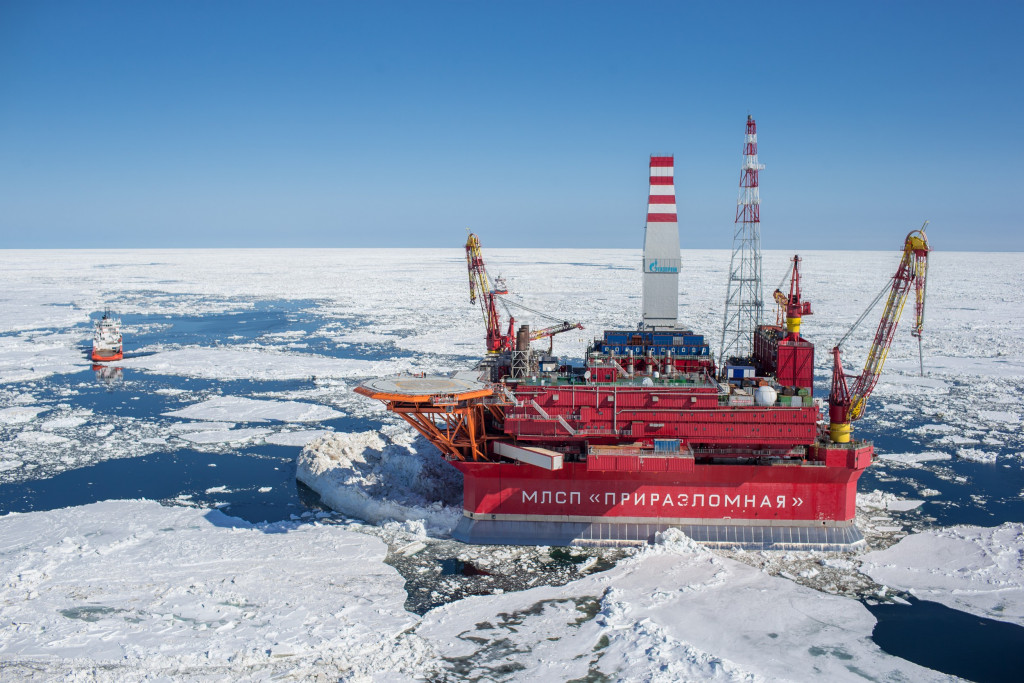 This article originally appeared at Unz.com, written by The Saker

Russia has embarked on a massive and much publicized effort to secure the 6’200km of her northern border and to be ready to defend her interests in the Arctic shelf up to 500km from her border. This means that 3’100’000 square kilometers of extremely difficult and inhospitable terrain will have to be secured. Why such a huge effort?

First and foremost, because of the need to protect the huge resources contained in the Siberian and Arctic shelves and waters, estimated at 15 percent of remaining oil and up to 30 percent of gas deposits. Second, Russia wants to expand the so-called “northern sea route” which, courtesy of the global warming phenomenon, is becoming much safer to navigate. Currently, only 4 million tons of cargo transit through that short-cut (the northern sea route from Europe to Asia takes 35 days vs 48-day via the Suez Canal) between Europe and Asia, but in the future the Russians estimate that this figure could be increased 20 times to a total of 80 million tons. The resources allocated to protect this route are huge and they include drones, space-based satellites, underwater monitoring stations and a network of radars. Russia is also building 14 new icebreakers , including several nuclear powered ones. But the biggest effort will be a military one.

Russia has decided to create a “Joint Strategic Command – North” (JSCN) which will be based on the Northern Fleet (which used to be subordinated to the Western Military District). The JSCN will not have the official status of a military district or strategic direction, but for all practical purposes this will become a single, independent, operational-strategic command with a powerful naval component (the Northern Fleet has always been the most powerful of the 4 fleets or Russia) and a large aviation component which will include search and rescue, anti-submarine warfare, early warning aircraft and helicopters and, of course, long-range interceptors, including the formidable MiG-31BM. Coastal defense missiles of the “Rubezh” class will also be deployed.

The air-defense component will immediately include the Pantsir-S1 system but in the future Russia plans to deploy her newest S-400 Triumf on her northern borders. Units from the various military districts have now been re-subordinated to the JSCN and a Joint Tactical Group (JTG) force has been created. It is too early to predict the size of this JTG but the Arctic maneuvers launched by Russia this summer included 80,000 troops, 220 aircraft, 41 ships, and 15 submarines, which probably gives us a decent indication of what is being planned for the future.

Finally, both the Federal Security Service (FSB) and the Anti-Terrorism Committee (ATK) have announced that because of the huge, fragile, and very expensive infrastructure being deployed by Russia, the Russian security services will make a special effort to prevent any terrorist attacks in this sensitive sector. Considering the ecological fragility of the Arctic, this is a very sound measure.

Please take a look at this map which illustrates the current situation: 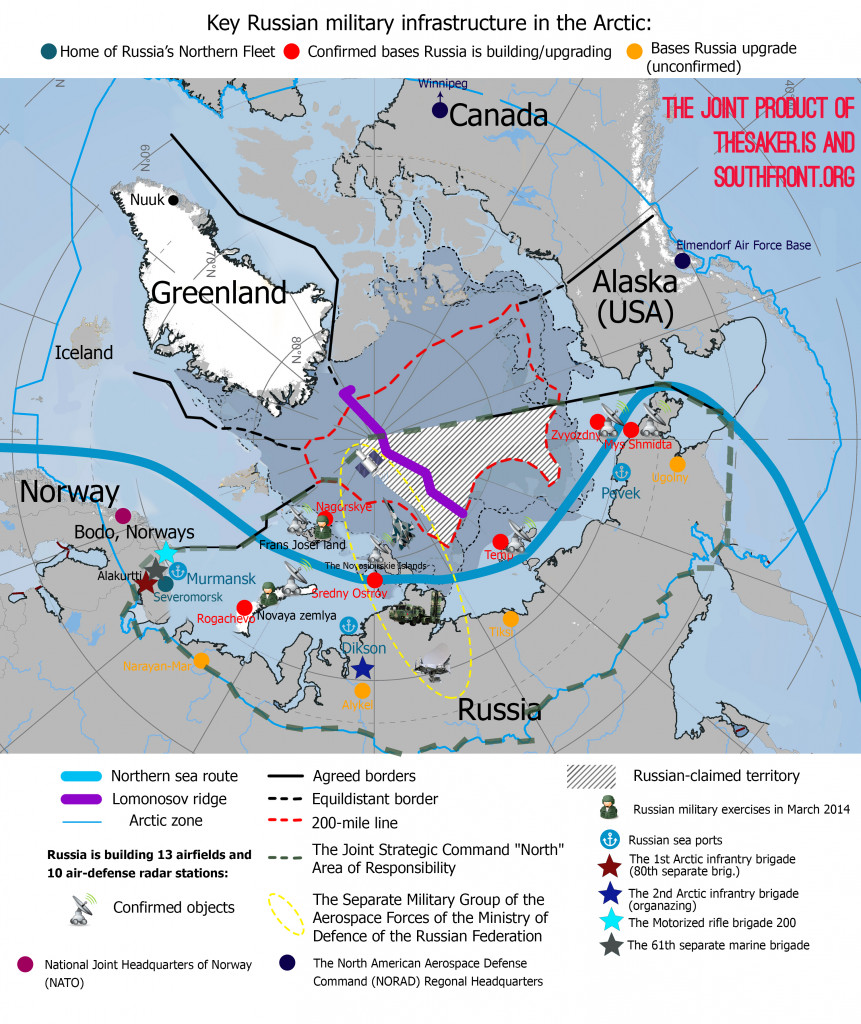 Predictably, the West is quite horrified as these Russian efforts. Reactions typically range fromconcern , to bafflement to outright panic . The sheer hypocrisy of all that whining is breathtaking.

In reality, of course, the West has been planning to take control of the Arctic resources for years. Actors in this planning stage have included the Council on Foreign Relations, the Pentagon and the US Navy . In fact, there is clearly a consensus in Washington – Uncle Sam wants to grab as much of the Arctic as possible. The problem is that, unlike Russia, Uncle Sam has neither the know-how, nor the financial resources nor the means to do so. Take, for example, the US Navy.

The US Navy has always been primarily a “warm waters” navy. With anywhere between 10 to 14 aircraft carriers the main purpose of the US Navy has always been to place a few runways off the shores of any country daring to defy the self-appointed World Hegemon. The US Navy is, therefore, the most powerful “blue water“on the planet. In contrast, the Soviet/Russian navy, a “green water navy”, has always had a totally different purpose: first and foremost, to protect the Russian nuclear submarines (SSBNs) with intercontinental missiles (SLBM) and to protect the Russian coastlines. The two biggest Soviet/Russian fleets have traditionally been the Northern Fleet and the Pacific Fleet and they have always operated in high latitudes, primarily the Arctic and the Sea of Okhotsk, where the Russian submarine bastions are located. The two smaller fleets – the Baltic Fleet and the Black Sea Fleet) had a much more modest role. Thus we can say that the largest and most capable part of the Soviet/Russian Navy has always been an high latitude, Arctic, one. Even the single Russian aircraft carrier was designed primarily with an air-defense mission and initially had no strike-aircraft on board at all.

This is also generally true for the rest of the US and Russian armed forces: the former were mostly designed to operate in low latitudes (below 50o) while the latter are much more used to operating in much colder conditions. This specialization is even reflected in the fact that the US GPS is more accurate in low latitudes whereas the Russian GLONASS more accurate in the high latitudes.

This specialization is now coming to haunt US force planners who have to design almost from scratch a polar capable force to try to catch-up with the Russians who have had a 80+ years head start. There is no doubt that the US, Canada, Norway and others will catch up, at least to some degree and with time, but the big difference is this: Russian military capabilities in the Arctic are already a reality today, not a goal to achieve in a decade or more.

Western politicians have, of course, tried to present these developments as yet another sign of the Russian “assertiveness” or even “aggressiveness”, but the reality is of course that this Russian policy is in full conformity with the new Russian strategic course which now prioritizes the northern and eastern directions: Siberia, the Arctic and, of course, China. Besides, it is not like Russia is trying to exclude anybody from collaborating in the Arctic. Western oil/gas companies have been actively investing in Russian exploration efforts and Russia has greatly benefited form western know-how acquired in these joint projects. Russia will gladly continue to collaborate with the West in the Arctic region, but Russia will also make darn sure that she has the means to protect and defend her interests in a strategically vital region.

The prospects for the Arctic are, in reality, pretty good. As soon as the western leaders come to terms with the reality that the Arctic is “russki land” and that negotiations, not unilateral and hostile actions, are the way to getting things done up there, negotiations will ensue and they will be profitable for all the parties involved.