The Russian military is clearly reacting to the increase of tensions with Turkey by ratcheting up the level of training exercises in the Southern MD as well as reinforcing its forces in Armenia. These operations are taking place against the backdrop of the stepped-up air campaign in Syria and the evident preparations for a medium-intensity land conflict. The sudden spike in interest in T-90 modernization to the T-90SM variant indicates the Russian military might want a truly advanced MBT in service in significant quantities before the T-14 enters series production in two-three years (at the earliest). The T-90SM, since it is already a mature project, could be available for delivery in quantity already in 2016. The fact that project is being seriously considered by the Russian MOD suggests a certain air of urgency.

No major developments this week.

Russian MOD is putting the T-90SM through its paces in order to evaluate Uralvagonzavod’s proposal to upgrade existing T-90 MBT fleet to the T-90SM standard which incorporates many of the technologies developed for the T-14, including the 2A82 125mm cannon. While an inferior to the T-14, the T-90SM is better than the T-72B3 upgrade and comparable to even the best NATO MBTs currently in service. Moreover, and of crucial importance in the era of low oil revenues, it can be in service more quickly and cheaply than the T-14, since the Russian military already has over 400 T-90s in its inventory. The newly formed unit (presumably brigade or regiment, considering the comprehensive range of comms equipment it will use) will use the latest in Russian military communications, including satellite systems and automated battlefield control network systems. Two of these attack helicopters were delivered to the army aviation base in Pskov, located in the Western Military District.

Over 100 snipers from Western MD units participated in the training exercise.

The training session involved the assembly of RPG and AGS crews from Western MD units and extensive live fire.

Over 100 tank crewmen participated in extensive maneuver and fire training.

Russian forces in the Kurils trained for countering terrorist (and/or special operations?) infiltration.

Over 200 Western MD pilots, including combat aircraft and helicopter crews, increased their level of qualification by demonstrating abilities consistent with the higher proficiency category. 68 pilots qualified at the “sniper pilot” level, the highest proficiency qualification. The S-300-equipped regiment will be permanently stationed on the island. Its personnel will enjoy a range of additional benefits due to the service hardships associated with Arctic service.

Russian heavy bombers saw an increase in activity during the past week, striking ISIS targets in Syria from their base in Mozdok. The strikes were intended to facilitate Syrian army advance, which also benefited from Russian tactical aircraft operations from the Hmeimim base.

A Su-25SM-equipped attack aviation regiment of the Southern MD carried out a regimental-level training exercise focusing on striking ground targets with bombs and rockets.

Russian forces in Armenia were reinforced by a squadron of 7 helicopters which included Mi-24P attack machines and Mi-8MT transport machines.

The flotilla continues its high level of activity, remaining in a high state of readiness to launch cruise missile strikes against terrorist targets.

This is another major step forward in Russia-Iran military cooperation, following on the footsteps of the S-300PMU2 sale to Iran. Iran’s delegation will travel to Russia in the next few months in order to finalize the details of the contract. Russian ships participating in the joint Russia-India naval exercise include the missile cruiser Varyag and destroyer Bystryy, as well as replenishment ships.

The destroyer participated in a simulated anti-piracy operation with Pakistani forces. 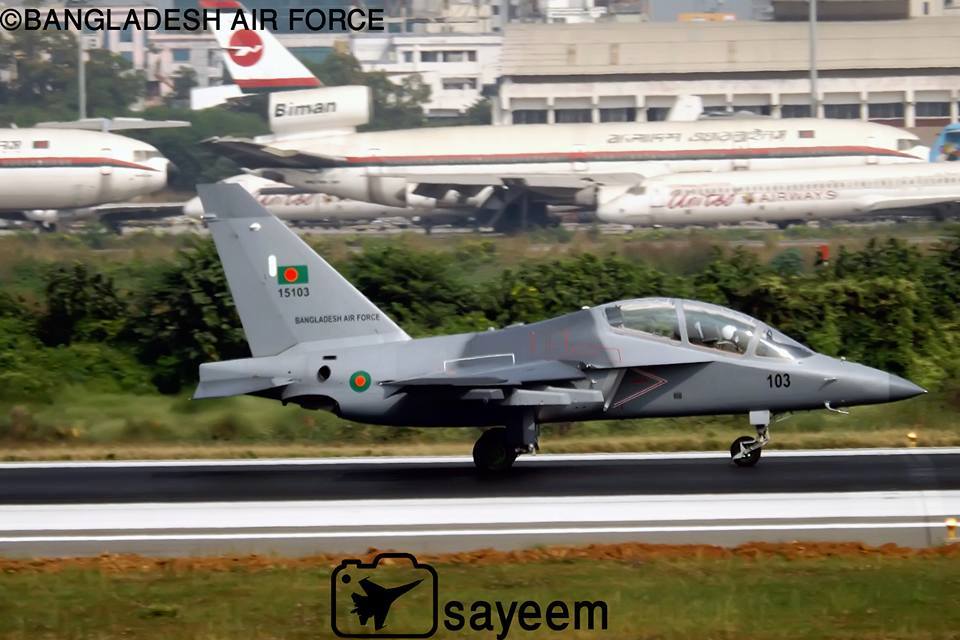 Bangladesh procured a total of Irkut-manufactured 16 Yak-130s, with an option for 8 more, in 2013. The six aircraft are the first to be delivered as part of that contract. Russia’s participation in the Gulf Defense and Aerospace 2015 was the first time it was part of that annual defense exhibition. Russian manufacturers presented the full range of weapons available for export.