Russian President Vladimir Putin is expected to sign the State Armament Program for 2018-2025, which comes at a budget of 19 trillion rubles, before the year-end. The document emphasizes the role of new breakthrough technologies. Husky-class submarines are a good example of state-of-the-art weapons the Russia’s military will receive while the program is implemented. On December 20, Adm. Vladimir Korolev, the commander of the Russian Navy, reviewed the preliminary conceptual design of a fifth-generation submarine, which was developed by St. Petersburg Marine Design Bureau “Malakhite.” 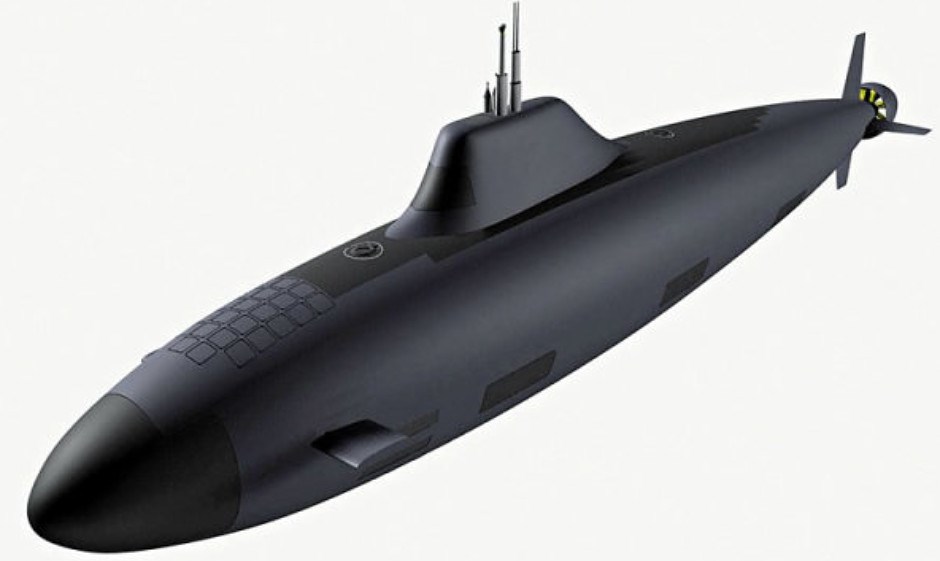 Russia’s United Shipbuilding Corporation (UAC) has announced the start of the development of a fifth-generation Husky-class stealth nuclear submarine to replace the existing Yasen-class boats. The research and development stage of the project is scheduled to be completed next year. The goal is to have a cost-effective multi-purpose nuclear submarine, with a construction time of four to four and a half years to produce 15-20 submarines totally. There are few details about the class in open sources, but whatever is already known suggests that Husky subs will be a technological breakthrough. United Ship-Building Corporation President Alexei Rakhmanov said it will be “an absolutely different submarine from the viewpoint of physical fields” to be “standardized to combine key elements of strategic and multipurpose submarines.”

Oleg Vlasov, head of the robotics sector of the Malakhit Bureau, said that the Husky-class submarine will be equipped with robotic systems able to operate in water and air. According to Deputy Navy Commander Vice Adm. Viktor Bursuk, the construction of Husky-class multi-purpose nuclear submarines is expected to begin in 2023-2024. The first Husky is to be delivered in 2025, while the last would be delivered in the 2030s.

The displacement of a SSBN version, if ever built, will be larger to accommodate intercontinental ballistic missiles (ICBMs). The SSGN and the SSBN variants would be added an extra hull section. The SSBN variant could be built contingent on what happens with the New START arms control treaty.

The armament suite will include 30 533m torpedoes, sea-mines and cruise missiles launched via 10 torpedo tubes. SSGN’s 8 launchers will accommodate 32 cruise missiles. The SSGN variant will also be armed with the 3M22 Zircon hypersonic anti-ship missile, which is already undergoing tests. The new missiles capable of Mach 5.0-Mach 6.0 will have a range of 250 miles, with sheer speed making it extremely difficult to intercept with existing missile defense technology. The weapon is currently in testing. It is expected to enter into production in 2018.

Russia will be the only nation in the world to launch serial production of hypersonic weapons, leaving the US far behind. Admiral Cecil Haney, the head of US Strategic Command, warned that American anti-missile and anti-aircraft defense systems would be virtually incapable of intercepting the Russian hypersonic missile. Harry J. Kazianis, Executive Editor of The National Interest, believes that such missiles could «could turn America’s supercarriers into multi-billion dollar graveyards for thousands of US sailors».

The new class will incorporate various technologies of the Borei-class as well as the Project 885-M Yasen class of SSNs. It is expected to have liquid metal cooled reactors. Improved composites and new polymers are supposed to be used throughout from the hull coating to the dive planes, rudders, stabilizers, propellers (or pump jet propulsors), drive shafts and possibly even the hulls themselves, further reducing the ship’s acoustic signature. New multi-layer composite materials still in testing will isolate working mechanisms from vibrations. The composite material has a high internal loss factor, or sound absorption properties can change when vibration occurs, completely preventing the spread of vibrational energy. Composites don’t corrode and thus wouldn’t need to be painted, reducing maintenance costs.

Husky has the torpedo tubes in the bow pointing directly forward with the sonar below it. The ship will also have long flank arrays. A modern conformal array will be installed.

Featuring lowered noise, automated control systems, reactor safety, and long-range weapons, the new fifth-generation submarine would be designed to serve the Navy for 52 years. Taking into account the technological sophistication of Russia submarines in production, such as Yasen– class, and the production capacity of Sevmash, the principal nuclear submarine shipyard, there is each and every reason to believe that the knowhow and production capacity exist to make Russia the first country in the world to have a fifth generation submarine in service.

Yassen class subs are quite capable, the 5th generation Husky will supersede it’s capabilities. Being able to do a modular construction for SSBN, SSGN and SSN is significant being able provide a common platform with modular variations for several types of submarines. The armament capability will be significantly increased with the introduction of Zircon hypersonic missiles that would render large capital ships as shooting targets.

What is the point of building Yasen subs if you are going to replacing them with next generation you already have in mind. This is an example of skipping land lines for cellular phones.

Why build Suk 30, 35 when you can replace them with Suk 57? It is called a combined platform; generation 5 subs are not going to replace the Yassen class, it will augment it.

I mean it depends on a lot of factors, as the speed of development increases, you procure less and less individual samples, as they become obsolete quickly. Once su57 is operational, I doubt you will see many su 30 orders, except for export.

The platforms do not become obsolete, they can be remodernized several times over and remain relevant.

I guess these things are determined issue by issue.

you cant replace, becsuse will be produced law amount of pak.

3 Borei subs are commissioned or undergoing trials, construction on the next 5 are in various stages of development. After 2025 Russia will build Borei B which would be quieter and deadlier. The Yassen subs have been slow due to overall costs, however, they will be deployed by 2020-2022.

While I am sure we are not completely informed on the ins and out of these subs, I am concerned whether Russian still has the manufacturing precision and capacity to make such weapons at such a pace in large quantities. Also, the reality is that in 2017, technology only remains relevant as long as it is secret. The moment something is produced, every other person hacks, copies, reverse engineers and improves while mass producing cheaper alternatives.

You can’t copy something you don’t have technological facilities for. US already lost much of them due to lack of demand, China still haven’t got the knack of all that is required.

You are also correct to have concerns about our manufacturing capabilities, conditions are still far from optimal for the industry, but thing is – there won’t be a new arms race. Only a very special type of idiots would continue to pretend there is some great prize to be won with conventional weapons in a world of asymmetrical responses (“terrorism”, nuclear weapons).

Russian military exellence is a real, but nonetheless facade for the actual means of getting upper hand in the struggle for dominance.

High precision conventional weapons, provide another option before the nuclear thresh hold is crossed. Global strike capability with conventional firepower introduces another element of pushing the political envelope without the dangers associated with employing nuclear weapons.

> provide another option > introduces another element For whom?

Whoever has it and it is a real system instead of BS.

Still, there is no prize similar to the one at stake during the last arms race that would pay off the expenses.

The Yassen sub project has been slow in developing, I have no concern about the Russian manufacturing precision and capacity to produce these weapons, submarine construction has been one of their more positive aspect for their naval reconstruction effort; their only drawback is that they are expensive, so what….they will not build the Leader destroyers, they can spend the money on these subs. They plan to produce 7-8 of these subs to modernize their SSGN fleeet, 2-3 Yassen subs deployed in mid Atlantic would have a significant part in controlling and monitoring activities above and below the ocean.

The modular design saves big $$$, the modular subs will also be easier to make with high precision and this all speeds up production.

“This is a very special program expected to result in something the world has never seen before. The new class is expected to have a common hull design, a common sonar, power and propulsion systems for three variants…”

So, it’s the “F-35 doctrine” for submarines. Hopefully, the Russians will do better than LockMart.

But, but, our mighty F-35 super airplane will be able to find and shoot down at them in any blue water, right?