Whether this is a coordinated response is unclear – and certainly on a much smaller scale – but Bloomberg reports that Russian Prime Minister Dmitry Medvedev signed a decree this morning imposing higher tariffs on U.S. products in retaliation for U.S. duties on metals imports, according to Economy Ministry statement. 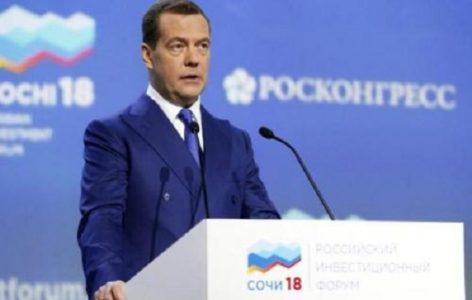 Reuters reports that Russia’s additional duties will apply to imports of fiber optics, equipment for road construction, oil and gas industry, metal processing and mining, according to an economy ministry statement.

Russia will impose duties on goods which have Russian-made substitutes, Economy Minister Maxim Oreshkin is quoted as saying in the statement.

“The compensation measures will be applied in the form of additional, higher rates of import duties ranging from 25% to 40% of the price of imported goods. Duties will be imposed on some U.S. goods, the analogues of which are produced in Russia. In particular, the measures cover some types of road construction equipment, oil and gas equipment, metalworking machines, rock drilling equipment, and optical fiber,” Minister Maxim Oreshkin said as quoted by the ministry.

“The financial damage inflicted on Russian exporters by the U.S. trade restrictions amounts to $537.6 million. This is the amount of additional duties that Russian suppliers have to pay in the U.S.

The current increase of duties allows us to compensate for only part of the damage amounting to $87.6 million. This is compensation that Russia has the right to recover under the WTO rules,” he said.

Russia will be able to compensate for the remaining part in three years since the introduction of the U.S. duties or after approval of the WTO dispute settlement body if it finds the U.S. restrictions violating the organization’s rules, the ministry said.

Makes you wonder how long Russia will stay with WTO – just like Trump – if this is all the response “you’re allowed.”

Destroy the rothschild dollar,,and the world will be a better place.

This is Lincoln dollar, long hated by jews.

In other words…take that caterpillar, serves you right for supporting terrorists in Syria.

Caterpillar’s are also notoriously used to bulldoze innocent peoples homes, that are inhabited, in occupied Palestine. Boycott that scumbag company.

Everyone’s blowing up these tariffs like it’s the iron curtain or something.

US started it and they in the long run will not be able to weather it just fact no chaser.

Uh, Communist China broke the iron curtain because of their famines and the USSR broke it because bankruptcy. The arrangement of alliances and economics means we coukd blockade both Russia and China and survive.

The west is going broke for nearly a century and has massive debt once the Petro dollar dies so does much of the western world. US no longer has that comfort more debt unexplained and actual debt is over 40 trillion.

Besides it was the West that created the Iron curtain in 1949 by order of Winston Churchill you silly little pratt.

You say that even though you neither believe it nor desire it, you simply want others to accept it.

Just the hard truths other western nations can no longer support carrying your guys debt. Seems it’s best to stop continuing going to war would be best you guys suck at it alone.

He, one moment, sanctions are the other way around!

This trade war thing is good for people, and bad for the Rothschild’s globalist banking. Only the globalist like China and the UK-Empire and Europe and Mexico are complaining. Go go, Nations need to learn to be Independent, and not interdependent. Nations need to start making their own stuff, and feed their own people. No more globalist economy junk.

I think China is pretending to dislike a trade war with the US. China has a real advantage over the US in trade. The US only thinks in terms of dollars, profits for their oligarchs, China has a broader view. In a full blown trade war, GM and Ford will be the first casualties. China is the only branch of the GM empire making a profit. Both countries will lose a lot of money, and jobs, but China has a huge war chest to prop up its economy. The US would either have to borrow, or print, and with the current debt levels the US would have to sell most of its infrastructure to survive. The US would be like the UK and the end of WWII, in so much debt it had to ration food for many years.

And as for the banks, well when the SHF paper money is worth nothing. China has a huge undisclosed stash of gold, ready and waiting for the US to fall into this trap. The EU, and all the other western economies will get flushed with the US. When the dust settles, only countries with gold will survive.

Russia joins only the football championship.

Could be best for the world that Trump escalates his trade war till China dumps U.S. T-bonds, stops trading in $U.S. and sends the U.S. into bankruptcy. No cash, no war and no Israel. The Jews that don’t make it to Patagonia will be hiding in caves or swinging from the nearest lamppost when the hungry hordes wake up from their slumber.