According to the Russian President, the negotiations with his Iranian counterpart were “exhaustive and effective.” 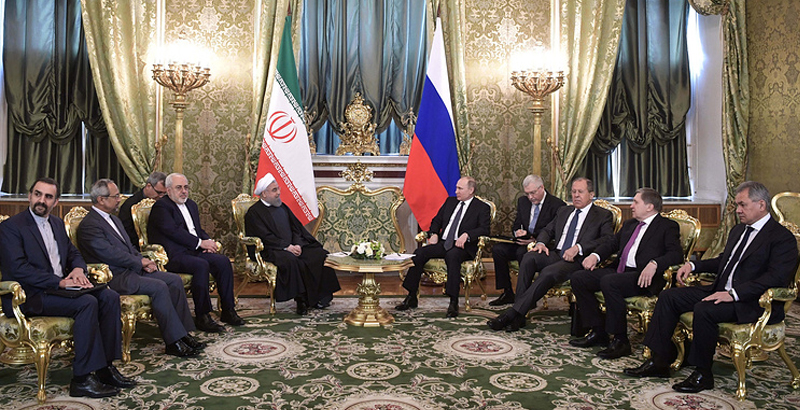 Russian President Vladimir Putin and his Iranian counterpart Hassan Rouhani issued a joint statement on results of the negotiations, which took place in the Kremlin on Tuesday. This was announced at a ceremony of signing bilateral documents, which was held in the presence of Putin and Rouhani. The sides also signed 16 joint documents on cooperation in various fields.

The sides also signed a memorandum on strategic cooperation on electrification of railways between the Russian Railways company and the Islamic Republic of Iran Railways (IRIR), as well as a contract for electrification of the Garmsar-Ince Burun railway section and supply of Russian equipment and locomotives.

In addition to these documents, an agreement on visa-free group travels for Russian and Iranian citizens was concluded, a memorandum between the Ministry of Transport of the two countries on cooperation in the field of physical culture and sports, as well as a memorandum on cooperation in the spheres of construction and housing and communal services were also signed.

Other documents included an agreement on extradition of persons, sentenced to deprivation of liberty, as well as a protocol on amending the agreement on legal assistance and legal relations in civil and criminal cases of March 5, 1996.

In addition, the sides signed a memorandum of understanding between the Russian Federal Accreditation Service and the National Accreditation Center of Iran (NACI), a memorandum of understanding on cooperation in the field of communications and information technologies, as well as an agreement on cooperation between the Roskongress Foundation and the Iran Chamber of Commerce, Industries, Mines and Agriculture.

One of the central issues in the talks was a problem of fight against terrorism in all its forms and manifestations. “Particular attention was paid to the issue of creation of a broad international coalition for combating terrorism, which would act on the basis of international law, primarily the UN Charter, respecting the sovereignty of states, directly affected by terrorist attacks, without double standards,” the statement, adopted at the end of the meeting, reads.

The statement also stressed the commitment of Moscow and Tehran to a political settlement of the conflict in Syria: “Russia and Iran, respecting the independence, unity, sovereignty and territorial integrity of the Syrian Arab Republic, as well as having regard to the principled position on the non-alternative solution of the Syrian problem by peaceful means, came out for a political-diplomatic settlement of the conflict in Syria on the basis of the principles, set forth in UN Security Council Resolution 2254.”

In addition, Putin and Rouhani also noted the illegitimacy of unilateral sanctions against states and called for “strengthening the central coordinating role of the UN in ensuring peace, security and sustainable development.”

Putin and Rouhani paid particular attention to cooperation between Moscow and Tehran in the field of nuclear energy. The Russian President noted that his state renders substantial assistance to Iran in the nuclear sphere. Putin made an accent on the compliance of the Russian-Iranian cooperation in the field of nuclear energy with all international requirements. Putin and Rouhani also stressed the importance of the fulfillment of the obligations under the Agreement on the Iran’s nuclear program (INP) by all the sides.

The joint statement also noted that Russia and Iran “are united in the fact that the Treaty on the Non-Proliferation of Nuclear Weapons (NPT) is a cornerstone of the non-proliferation regime of nuclear weapons and the most important basis for building up efforts for nuclear disarmament and usage of atomic energy for peaceful purposes.” The document also stressed that “Russia and Iran, supporting the idea of turning the Middle East into a region free of nuclear weapons, confirmed that the resolution on the Middle East, adopted at the Conference on the Review and Extension of this Treaty in 1995, will remain in force until its goals are achieved.”

Great attention was also paid to the various regional cooperation formats. In particular, Putin and Rouhani confirmed their support of the idea of forming the Free Trade Area (FTA) between Iran and the Eurasian Economic Union (EurAsEC).

Russia and Iran also confirmed their intention to continue practical steps to implement a project of the North-South international transport corridor, as well as pointed out the importance of efforts, aimed at a rapid joining of the Qazvin-Rasht-Astara railway section to this transport route.

The joint statement of the two presidents also noted that “the Russian side confirmed its unchanged support for the application of the Islamic Republic of Iran to obtain the status of a member state of the Shanghai Cooperation Organization (SCO) and advocated a prompt consideration of this application in accordance with the established procedure.”

The Russian President called the negotiations with his Iranian counterpart “exhaustive and effective.” Putin said that “the relations between Russia and Iran are really friendly, respectful.” In his turn, Rouhani noted with satisfaction that the two countries are “in a new stage of relations.”