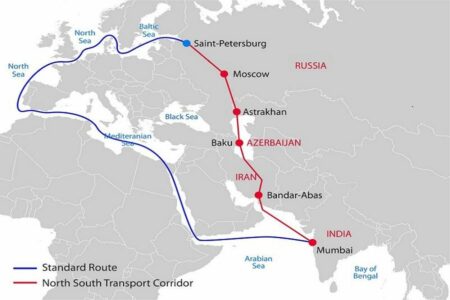 Russia, Iran and Azerbaijan signed a memorandum in Tehran on August 22 to simplify transit routes, improve business relations between the three countries, and develop logistics towards the European continent. The signing of the memorandum is an important step towards the anticipated “North-South” international transport corridor, which offers a shorter alternative to the Suez Canal route. Compared to the sea route through the Suez Canal, the distance is reduced by about two times, which will lower the cost of transportation by about 30% and save time.

This corridor will not only be a global artery that further integrates these countries and their economies, but will act as a geopolitical tool to strengthen a multipolar world order. It is predicted that up to 30 million tons of goods will be transported through the corridor every year and will help these countries bypass sanctions.

The memorandum is important for Russia’s bilateral trade with Azerbaijan and Iran, as well as connecting with Persian Gulf countries, India and even Southeast Asia. With Russia now the most sanctioned country in the world and closed off from European ports for Russian ships, along with the impossibility of obtaining goods from Western Europe, Moscow’s Eastward pivot has been established. In this way, the creation of alternative transport routes is important for Russia’s economic interests.

By signing the memorandum, the three states initiated a process of creating a common corridor for the delivery of various goods and started creating a single logistics and customs window for smooth, stable and fast delivery of goods. This will improve logistics between countries and Russia is anticipated to start receiving South and Southeast Asian products that are much more cost effective compared to their Western counterparts.

For Russia, this is a big project which will bring in billions of dollars in revenues and seriously strengthen its geopolitical position. Given that Azerbaijan has tense relations with Iran and Russia over the situation in Nagorno-Karabakh, the signing of such a memorandum also creates common interests between the three countries, which will have the potential to moderate Baku’s aggressive nature.

Last year, the trade exchange between Russia and Iran increased by more than 81% and reached $4.1 billion; with India it increased by 62.7% and amounted to almost $4.5 billion; and, by 12.1% with Azerbaijan. Although impressive, it is expected that trade exchange will skyrocket with the North-South corridor.

Kremlin spokesman Dmitry Peskov recently stated that Russia and Iran plan to stop using dollars in mutual trade transactions. Commenting on Western sanctions, he pointed out that the two countries have the opportunity to build strong cooperation that will minimize the consequences of sanctions. According to him, Iran has lived under sanctions for a long time but adapted well to this economic difficulty, thus allowing Iranians to live a relatively normal life.

As Russia is increasingly using national currencies in trade with other countries, the addition of a new trade artery allows the financially besieged country to completely bypass the West in transportation and trade, thus rendering sanctions useless. This is despite European leaders demanding their citizens make more sacrifices to their quality of life for the sake of economically attacking Russia with little success.

The US has long used the hegemony of the dollar as the world’s de facto currency to target and sanction countries outside of its control. As the entire world system is changing, the tendency for the value of the dollar as a world currency is gradually weakening.

At the same time though, the West views China as a greater enemy to its dominance in the long-term, and as the BRI comes to more prominence, perhaps Europe will have to begrudgingly accept the North-South corridor as a viable alternative. This remains conjecture for now though, and what is certain is that the corridor will be another step forward in weakening the West’s hegemony over the globe.

The welfare funded psionist masters and their illegal settler leeches have been dictating US foreign policy for so long to the detriment of real American interests and now the chickens are coming home to roost. From Afghanistan to Iraq, Syria to Ukraine, the US has wasted tens of trillions and lost tens of thousands of soldiers and have nothing to show for.

And what have the shit hole countries to display?

US has been killing and genicide 6 million of innocent peoples in the Middle East lol.

so I find my new mangina.

US is the real shithole with 150 million in poverty and food insecurity. The factual definition of a banana republic.

What you describe is the US now as a failed banana republic with worse income disparity than India. The Iranian port of Chah Bahar as the article and map accurately state is emerging as Russia’s access to Middle East, Asia and Africa and is one of the busiest ports and trade routes now. Even the Chinese are linking it to their One Belt. Russia, Iran and India are changing the global power balance.

Thanks to Iranian expertise in sanctions busting for 43 years, Russian energy income is up by 33% with higher prices and diversified markets, even the Bilderbderg Jew mouthpiece Wall Street Jewornal is complaining that SANCTIONS HAVE FAILED.

Russia Confounds the West by Recapturing Its Oil Riches Moscow is raking in more revenue than ever with the help of new buyers, new traders and the world’s seemingly insatiable demand for crude and Russian alliance with Iran and use of reflagged tankers.

US has been planning to destroys Russia Ukraine EU and China even EU because EU is competitor of US trade lol.

Congratulations to all three nations. Develop Asia and ignore the west.

jens holm
Reply to  It absolutely is the Jews

You get the point well. Russai cant devllop anything. They hardly educate people for it and the too few old ones dies.

I like all pointy objects in my prolapsed ass. Many thanks.

America and the UK will try their hardest to collapse the Islamic Republic and instigate a civil war in Iran. This is their goal.

Russia and Iran will not trade in dollars. Thats because they only has pictures.

Russia and Iran will not stick butt plugs in me, so I only has pictures.

If a country, like Iran, is on the US sanctions list, does the US expect them to comply with the sanctions the US puts on another country like Russia?

No this is much bigger – this is a new trade route that the West has no control over it at ALL, bypassing sanctions was not that hard for countries like Iran or Russia.

For e.g. Iran sells their goods to other friendly countries such as Turkey, Iraq, and Pakistan and they would then sell Iranian goods to other countries. That is only one way… but I know UAE and Qatar even bought Iran goods for themselves and also sell some other goods in the world market, e.g (Iranian carpet).

Seems to be a logical idea

North Korea, Iran and Armenia – but not even the Chinese – Muahaha, no wonder that Russia is the laughing stock of the world ^^

The whole motive behind the Special Military Operation is to kick the evil Molloch-worshipping American-Brits out of everywhere on Earth where they have controlling influence along with their satanic Jew-slime masters. The first objective is Europe, but the Middle East and Asia will quickly follow suit. It’s already happening. The Americunts and their Natostan lap dogs are screwed royally and they know it. No more micro-chips coming to their countries from China, who will gladly sell them to its main ally Russia. All that will be left of Natostan military equipment will be rendered useless and nothing new can be built to replace it. Already due to these measures, a production drop of 4 million cars in Europe is forecast for this year alone and in Italy for example, the new National Health Service identity cards will be without microchips due to their shortage. Then, by November-December, due to the sky-rocketing energy costs, the new homeless and destitute former European middle class will be ravaging through the streets looking to burn down every government institution and kill any politician to be found. All the while, Satan will be rubbing his hands and God will give him his token reward. The Universe works in strange ways.

Azerbayjan is not the key country. İran is

I agree with what you said but please change your alias. I can’t agree with Satan…

Enhancing international trade on equal terms is beneficial for all. The world has had enough of the Anglozios and their mafia racket.

I wonder why Russians chosen ASSerGARBGEan instead of Armenia +R. of Artsakh?!

Azerbaijan needs to decide on whose side it want to be, east or west, Russia or US.

The best way to deal with sanctions is to go around them.

Makes one pause what the true definition of what “getting around them” actually implies or suggests!

Only a demented fukwit,whom cant even afford to rego any lada for that matter would suggest this is not a great improvment in overall transit times and freedom of passage,like look at the map soros drrr.