One should not expect the US to sit back for too long and watch Russia take the lead. It will respond. The question is, how will it respond and what can it do? 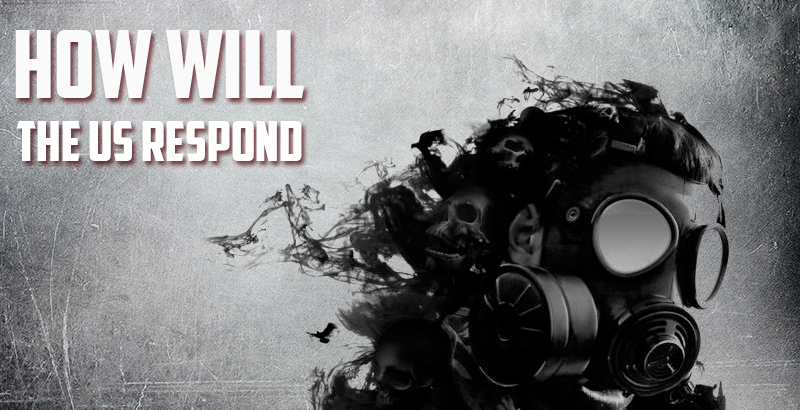 Written by Joshua Tartakovsky for SouthFront

The bombing campaign against ISIS undertaken by the Russian Federation following a formal request by the Government of Syria, has managed to inflict serious damage on ISIL and other rebel groups within several days, causing in at least one case a massive hand-over of weapons, a task the US failed to deliver in an entire year. At the United Nations, President Putin framed the actions undertaken in Syria as part of the war on terror, therefore managing to perhaps temporarily overcome the Western corporate media’s negative portrayal of him and to reach an American audience. He also wisely said that since citizens of Russia were part of the jihadist rebel groups, then it was Russia’s responsibility and burden to tackle them. Few could argue with this logic. For it has become so common to demonize Russia as responsible for nearly all ills of the region, that linking jihadist activity to Russians was a fitting explanation for many while then being forced to accept its logical conclusion.

While the West was caught by surprise and shock by Russia taking the lead in Syria, and as a new intelligence sharing center between Iran, Iraq, Syria and Russia provides an alternative axis to the US, Saudi Arabia, Turkey and Qatar military intelligence center in Amman, one should not expect the US to sit back for too long and watch Russia take the lead. It will respond. The question is, how will it respond and what can it do?

The most obvious step taken already was leading a propaganda war against Russia’s bombing of jihadist rebels, be they of al Nusra, the Free Syrian Army or ISIL. News of civilian casualties were spread even before the Russian air force bombed a given area. Russia has been portrayed as protecting Assad and as engaging in unpredictable, aggressive and dangerous behavior, as Western commentators described Russian actions with alarm in their voices. Yet such portrayal is not enough to win hearts and minds. First, many Americans probably do not mind the fact that Russia is bombing in Syria, even while they perceive its actions in Ukraine as an aggression. Secondly, the propaganda campaign led by the West can be seen as a desperate attempt to regain control but is not entirely convincing.

A more concrete step which could be taken by the US’ Saudi ally is presenting Russia as a warrior against Sunni Muslims and forming a popular jihad against Russia, both in Syria and within the Russian Federation in separatist regions. It was the US, led of course by Zbigniew Brzezinski, which armed and encouraged Mujahedeen in Afghanistan to fight against Russian forces in the country, with Brzezinski famously telling them that “God is on your side.” The Mujahedeen managed indeed to inflict heavy damage on Soviet forces, forcing an eventual withdrawal, and ultimately the Soviet defeat served as one of the factors which led to the collapse of the Soviet Union.

According to a recent unconfirmed report, over 50 Saudi religious leaders called for a jihad against Russian forces in Syria. The US and its Saudi ally will probably seek to overwhelm Syria with Islamic fighters, arm existing ones with anti-aircraft missiles and seek to portray Russia as a killer of Muslim civilians. However, with Egypt and Iraq supportive of Russia’s actions in Syria, it would be difficult to portray Russia as waging a crusade against Muslims. After all, the invasion of Iraq was not welcomed by Egypt, certainly not by Iraq and also not by Syria.

An inflow of jihadist fighters into Syria can be contained by Russian and Syrian forces even as if it may prolong the war. It is not a card strong enough to cause a serious defeat to Russian forces in the short run.

The ideal action for the US to take is one which will not just cause trouble to Russia in Syria or in Ukraine but an action which will result in Russia easily being portrayed as an unpredictable and aggressive power. If Russia is portrayed as a country which attacks Ukraine one day, then Syria the next day, and then a third country (possibly in the Baltic) in the third, many Americans may be convinced of the need to go to war against Russia.

At the same time, an American audience would be most vulnerable and willing to go to war with Russia, a goal that the US has all but been pushing for in the past several years, if Russia is perceived as directly attacking US forces in Syria. Such an attack will indeed present Russia as a mad country that not only humiliated the US by bombing in Syria but also attacked US forces therefore proving its recklessness. Americans, as people of other countries, do not like to be humiliated. Such an attack would trigger an emotional response and could lead to a proper justification for attacking Russia directly.

Noah Rothman in A Prelude to War at Commentary Magazine, not only argues convincingly that today as during the era preceding World War I, conditions are ripe for a third world war, but also portrays Russia as a major US rival due to the fact that it is bombing CIA-trained terrorists in Syria. That the US armed and trained terrorists to topple a sitting government is of course not examined as problematic or as worthy to reflect on.  How will the US respond to the loss of its hegemonic control over Syria?  Rothman writes that the Pentagon is now preparing a response whose details of course remain secret. Yet he proposes placing US air jets near by Russian jets with the hope of provoking the Russian jets to shoot them down in order to provoke an international incident which could lead to a third world war. Rothman argues that today as in the course of the first world war, US and Russian interests are that divergent that a world war seems inevitable, and he goes on to advocate for it even as he claims with supposed innocence that such a war may just be something that has to take place even as supposedly he does not wish it to happen. Of course, he is blinded by the fact that it is the US which is the leading country causing havoc and destruction around the world and engaging in bombings without receiving the approval of given countries, rather than Russia.  But as all aggressor nations, many in the US are unaware of their own destructive behaviors, perceiving responses as threats worthy of even further aggressions.

Rothman makes a strong case then which should be taken to heart. It is also possible that the US will seek to provide false intelligence on a given ISIS target at a particular area while the target happens to be a densely populated school or a hospital, resulting in Russia attacking it while presenting the latter as a mass-killer of civilians (a position of moral superiority which it desperately seeks as they deflect attention from its own crimes) along with an incident in which Russia attacks a US jet in Syrian air space. The coupling of mass killing of civilians and an attack on US forces rightly portray Russia as an unstable and reckless power that must be contained.

Additional scenarios may be encouraging Wahhabi terrorism inside the Russian Federation, orchestrating terrorist attacks in Moscow, providing Syrian rebels with missiles to bring down military jets, giving a green light to Kiev to launch a full attack on Donbass, or triggering a war in the Baltic. Perhaps NATO could start three fronts at once while most viewers in the West would see Russia’s responses as Russian aggression in three different areas. In any case, the ideal incident would be one in which Russia is clearly presented as an aggressor in the US public opinion and as a situation in which an argument can be made that the US must attack Russia as a matter of self-defense. Americans can be easily deceived into believing that Russia attacked US soldiers out of the blue and therefore Russia should take extra precautions to avoid into such traps.

It is therefore possible that we will witness a scenario of a US jet approaching a Russian jet without a warning, in response to which the latter will attack the former. It is not beyond the abilities of the US intelligence forces to carry out such a cynical act even if it means sacrificing a US pilot. The subsequent headlines in the US media on Russia downing a US jet will be sure to garner public mobilization in favor of a war with Russia. An alternative attack on a US fleet carrier near Syria by the Russian air force, following a series of supposed violation of Turkish airspace by the Russian forces as reported just now, could create the ideal ground for a world war III.

In a video produced by Storm Clouds Gathering, a man from a US think-tank (minute 20:10) is seen saying that the US could conceivably sink and Iranian submarine, therefore driving it to war. The problem with such thinking, however is that proposing such an action assumes that the response would be irrational and emotional, while in such a scenario is carried out against either Russia or Iran, the given country is likely to act calmly and coldly, not seeking to be drawn into a wider war.

Preparing for such provocations and taking extra precaution about scenarios which may break out, is therefore an imperative whose importance cannot be underestimated.