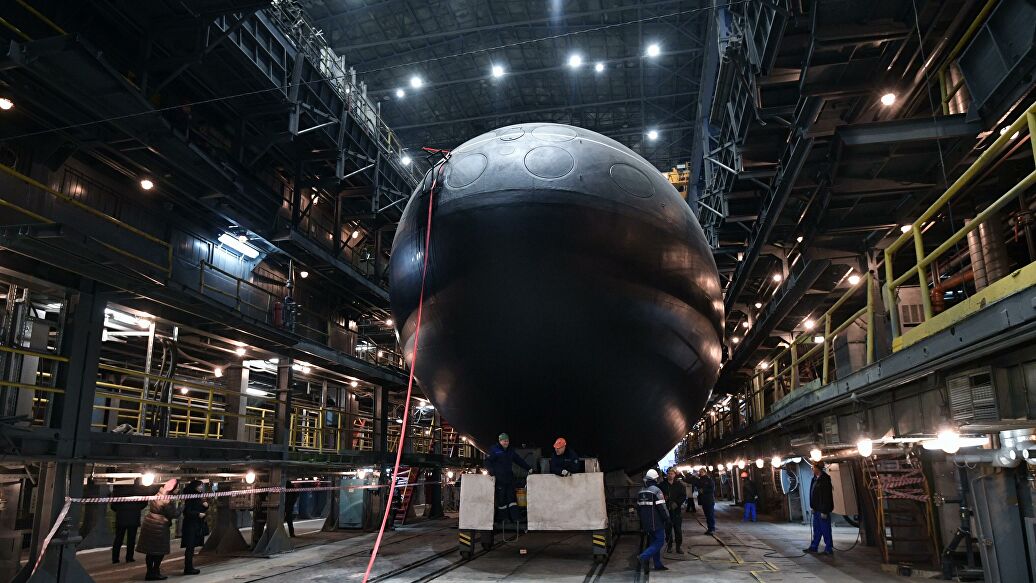 The Russian Ministry of Defense is completing the first stage of modernization of the infrastructure for basing submarine forces.

For the first time in modern history, Russian submarines will receive protected bases and moorings with all necessary equipment.

Their construction in Gadzhievo and Zaozersk, Murmansk region, as well as in Vilyuchinsk in Kamchatka, has already begun, unnamed sources in the Russian Navy told Izvestia.

For Russia’s modern submarines to function properly, and for as long as possible, suitable ground facilities are required, for them to port at.

There should be arsenals for storing missile and mine torpedo weapons, as well as special piers and cranes for loading ballistic missiles.

Therefore, when the program for the construction of facilities for the ocean fleet was launched in 2012, the command of the Navy and the Ministry of Defense took the path of the primary development of the basing system, so that later there was a lot room to accept warships and submarines.

The first is the creation of 14 project 955A Borei-class nuclear-powered ballistic missile submarines. Two of them – Knyaz Vladimir and Knyaz Oleg- will be delivered to the Russian Navy in 2020.

The other program is the construction of project 885 and 885M Yasen-class nuclear-powered cruise missile submarines. These fourth-generation submarines are armed with a wide range of missile and torpedo weapons, including Kalibr missiles.

The third program is for the construction of project 677 Lada-class diesel-electric attack submarines.

And the final, fourth, is for the construction of the 636.6 Kilo-class diesel-electric attack submarines.

The situation was not the same in the past, according to historian of the Navy of Russia and the USSR Dmitry Boltenkov.

“I must admit, in Soviet times there was a strong bias towards the construction of the naval fleet at the expense of creating the infrastructure of the basing system.

As a result, the ships stood in clusters at the berths and their systems wore out ahead of time.

The short history of the service of Project 705 submarines became characteristic.

These were the fastest submarines in the history of the world fleet. Small, well-armed and highly automated boats became a sensation in the 1970s and 1980s. But their foundation was a liquid metal coolant reactor.

Unfortunately, problems with coastal maintenance of such reactors led to a very short service of this miracle of domestic shipbuilding.

And the general underdevelopment of the coastal basing system led to the mass withdrawal from the fleet in the 1990s of a large number of ships and submarines that could serve in our time.”

Thus, the Russian Navy appeared to have learned its lessons, and developing a full-fledged system for providing and supporting its submarines and warships, prior to even having a full fleet of modern vessels.

Significant progress is being made in the Syrian port of Tartus, in Boltenkov’s words:

“If earlier four people and a dog looked after this provincial military object, now it is a full-fledged naval base on which both atomic and non-nuclear submarines can be accommodated.”

Housing was also built for the crews of the submarine forces on the Kola and Kamchatka Peninsulas.

To protect these facilities, multi-layered defense systems were also developed.

Each submarine base is guarded by a squad to combat submarine sabotage forces. The points themselves are covered by air defense missile regiments with S-400 and Pantsir S-1 defense systems.

The issues of training and retraining of submarine crews are given close attention by the Navy command. The crews are awarded boats of enormous, one might even say planetary power, and as such they must receive quality training.

I see you’ve got to enjoy working at height in that job.

It’s truly incredible what can be accomplished in this present day, yet we in the west still have small minded greedy shysters pulling the levers of power. As long as that continues, the Russia admin under President Putin and his staff will continue its upgrades, because they know just as soon as western shysters get an upper hand, they will use it. It’s a no brainer, big mouths in the US and nato have said as much.

Not too much is heard of US or nato upgrades or of new weapon development. Perhaps they don’t have too much to talk about. Maybe they are busy planning the next breach of international law and just about every UN mandate, not that the UN is too bothered.

Is silver and rust

You mean silver and gold. That too.

You probatly will prefare we shall do as in Syria, Iraq, Iran and Yemen so we can be at the same level lowere living age, income and buildings.

Deterrence is not gold. Its easy to make wars. Gold is to make peace.

“A nation will either feed it’s it’ Army, or it will feed someone else’s Army.”

Physical security matters and is very necessary to avoid war.

The non USA will raise their money spending up to 2% of the local country budgets and by that pay more.

True thats not much. We take the peace dividens after the USSR collapse. To me Russia still look like some collapse.

I dont see we have no use of any upper hand. We already has it and can improve it very fast. China could do that but not Old and Tired Russia having no tools for any improvements, which can make them grow.

They still dont have the needed middleclass, no effective production methods and very bad logistics.

Its exact the same bbad systems as in several ME systems. People dont get, they never can grow unless they fokus and invest.

That rock you live under sure does block out the light.

With regard to the named trolls and their ‘guests’, they seem very quiet these days. This suggests that they are part of an organised group, to me.

Of course they are.