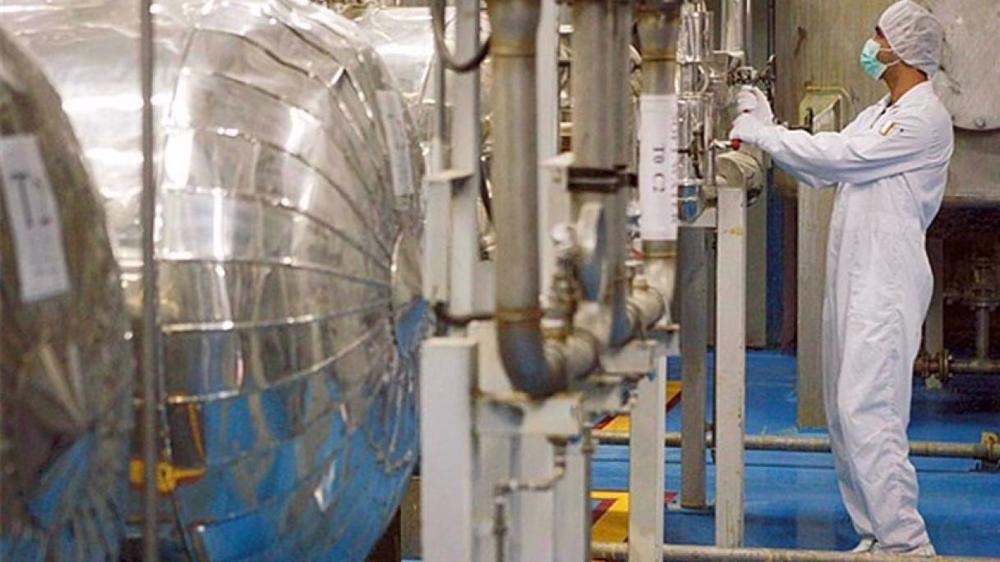 The Kremlin said that the trio spoke in favor of “preserving and implementing” the JCPOA and “further coordinating steps in this direction.”

Separately, the Elysee Palace said in a statement that three leaders had agreed to take measures on the nuclear pact and coordinate their efforts to return Iran to full compliance with its international obligations as soon as possible.

The new US administration, under President Joe Biden, has claimed it is willing to rejoin the JCPOA, but conditioned the move on Tehran’s resumption of the obligations it has suspended under the Article 36 of the nuclear agreement in response to the unilateral US withdrawal in 2018 and the other parties’ failure to meet their end of the bargain.

This is still only empty rhetoric on the side of the US, since it simply follows in the footsteps of the Trump administration.

On March 29th, an unnamed Iranian official said that 20% uranium enrichment that Iran had begun would stop when the US lifts all sanctions and really rejoins the JCPOA.

“20-percent uranium enrichment is in line with Paragraph 36 of the JCPOA and will be stopped only if the US lifts all the sanctions,” the official said.

The Iranian official said the country will not stop any of its current nuclear activities before the removal of all sanctions.

“The Biden administration is losing time, and if it fails to lift the sanctions soon, Iran will take the next steps, which will be further reduction of its JCPOA commitments,” the official added.

The Iranian official made the remarks in reaction to a report by Politico which claimed the US is to end the deadlock over the 2015 nuclear deal with a new proposal.

Biden administration officials, mindful of the increasingly unfavorable calendar, plan to put forth a new proposal to jump-start the talks as soon as this week, two people familiar with the situation told Politico.

Iran is in touch with the remaining participants in the #JCPOA on issues.

No proposal is needed for the US to rejoin the JCPOA. It only requires a political decision by the US to fully and immediately implement all of its obligations under the accord and abide by UNSCR 2231.

The proposal asks Iran to halt some of its nuclear activities, such as work on advanced centrifuges and the enrichment of uranium to 20% purity, in exchange for some relief from US economic sanctions, said one of the unnamed sources.

Shahrokh Nazemi, the head of the press section at Iran’s mission to the United Nations, told Politico that the “return of the US to the [deal] needs no specific proposal. It only requires a political decision by the US to go for the full and immediate implementation of its obligations under” the agreement and a key UN resolution.”

Finally, on March 30th, Iranian Foreign Minister Javad Zarif said that the administration of US President Joe Biden for upholding the same pressure policy of his predecessor, Donald Trump, which he himself once criticized sharply.

"It's sadly ironic that the State Dept is now calling on Iran to abide by the very deal the Trump administration abandoned."@POTUS, 2019

Your admin follows Trump's footsteps while trying to use his unlawful sanctions as "leverage".

Nasty habits die hard. Time to kick this one. pic.twitter.com/PIhN1YwT3e

To show the hypocrisy, he shared a statement made by Biden earlier.

Previously, Leader of the Islamic Revolution Ayatollah Seyyed Ali Khamenei stressed that Washington must first lift all the sanctions it has imposed on Tehran in a verifiable manner before the Islamic Republic would return to full compliance with the JCPOA.

Americans are slaves of Isisrahellians Zionists, notoriously big liars, so it is useless to talk to Yankees when they are unable to make autonomous decisions, Iran must only continue to stay in its correct position and let the empire of evil shows In the world on all its unreliability, on Europeans it is better to lay a pitiful veil, they are nothing and do not represent anything.

Europeans bosses are too busy in singing ” bellaciao ” and strenghtenig their bloody antifa/lgbt dictatorships against the different populations that live under their tyranny .

Iran is right of course, the yankee-twats must crawl back and accept the agreement as first agreed and signed, stop all sanctions and discuss compensation for damages caused and then, maybe, discuss changes to the agreement. first demand by iran should be the jews in palestine kicked out for good and my guess is that england, germany, france and russia and china would accept that since they are all tired of the murders, the thievery, and the constant begging for more by the jews and the blatant genocide of palestinians by the jews and the concentration camp Gaza, in short the abject and willful disregard of all human values respected by the world but not the jews!

Russia playing silly games they should be more concerned in having the EU members complying with the agreement and not turning on Iran who have not violated the JCPOA.

I don’t want more here either :) You must have a few salt mines handy ?

While the yapping about JCPOA continues ad nauseum, Iran is selling China a million barrels of oil a day, defying US sanctions.

US sanctions are there to be broken.

Few care what the corrupt and bankrupt US wants anymore :)

In a multipolar world US sanctions do not have much bite. It seems Brazil is ready to rejoin BRICS with Lula being the popular choice at the expense Bolsonaro. Brazil, Russia and S.Africa rich in natural resources, India and China being the economic,manufacturing and IT hub,…..Uncle Sam can take his dollar printing machine and display it as a museum exhibition at the Smithsonian.

“[the] three [EU] leaders had agreed to take measures on the nuclear pact and coordinate their efforts to return Iran to full compliance with its international obligations as soon as possible.”

How about they start by returning themselves to full compliance before lecturing Iran. The EU has blocked Iranian airlines, frozen Iranian assets, stopped buying Iranian oil, and cancelled all civilian projects in Iran. All of this is in violation of the JCPOA. Claiming that the U.S. forced them to do this does not change the fact that they are not meeting their obligations.

Any deal that neglects the Israeli or the Arab interests in the ME would be futile, simply because neither us or our Arab friends will obey it when it comes to our national security. But by all means. keep talking yourself to the death, as if anybody cares what the Europeans and Russia think.

Fine but that would include arms limitations on Israel and the Gulf states as well.

Telling Iran, ‘you have to give up ballistic missiles and a no sunset clause to buying foreign weapons’ is not a serious proposal when Israel is getting F35’s and possibly updating their nuclear arsenal with tactical nukes, oh, and why does Israel need submarines? Iran is already at an arms disadvantage, they might freeze some weapons development / deployment but not while the Gulfies and Israel keep arming themselves to the teeth.

Iran is arming themselves faster than anyone else across the ME, preparing for a war. Why shouldn’t we and the Gulf states arm ourselves too with U.S support? our submarines are meant for a 2nd strike capability which means we expect Iran to be the first one to start the attack.

Judging by the Iranians in this site minus Garga and gryzor, they don’t even hide it.