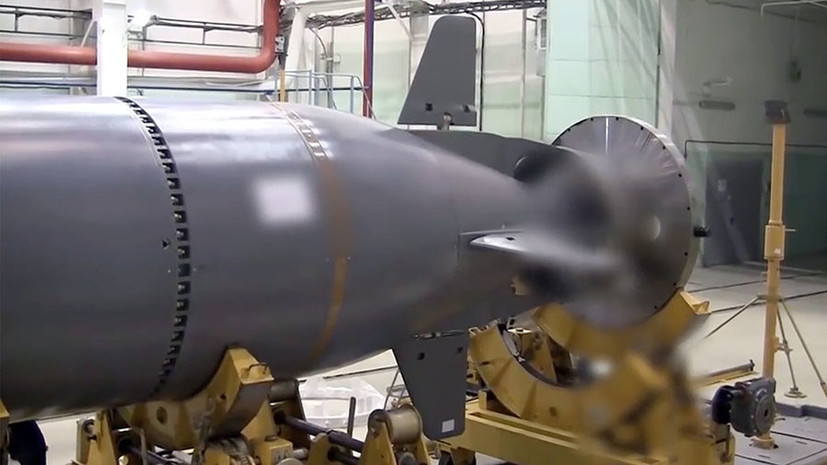 On April 23, the Project 09852 special-purpose nuclear-powered submarine Belgorod was floated out at the Sevmash Shipyard in north Russia. The submarine will become the first carrier of Poseidon strategic underwater vehicles.

According to reports, the submarine’s construction will be completed afloat. Tests of the submarine’s nuclear reactor and its dockside trials are scheduled for 2019. The Belgorod will pass sea and state trials in 2020. It’s reportedly set to enter service with the Russian Navy by the end of 2020.

The Sevmash Shipyard in Severodvinsk in the northern Arkhangelsk Region is set to float out the special-purpose nuclear-powered submarine Belgorod on April 23. TASS has put together material on this ship.

The Belgorod is a nuclear-powered special-purpose and research submarine. Its exact operational characteristics have been classified. Russia’s Defense Ministry did not officially comment on media reports on this submarine.

The shipbuilders are building the submarine based on an incompletely constructed Project 949A ‘Antey’ nuclear-powered underwater cruiser. The submarine was laid out at the Sevmash Shipyard on July 24, 1992 but its construction was suspended in 1997. In the 2000s, attempts were made to restart work on completing the sub’s construction under the improved Project 949AM but a lack of financing frustrated this effort. In the early 2010s, a decision was made to rebuild the Belgorod under the new Project 09852 developed by the Rubin Central Design Bureau for Marine Engineering (St. Petersburg). The renewed keel-laying ceremony for the sub under construction No. 91664 was held on December 20, 2012 with the participation of Admiral Viktor Chirkov (the Russian Navy commander-in-chief in 2012-2016).

Initially, Russia’s United Shipbuilding Corporation (USC) and Sevmash stated in their press releases that the Belgorod was a research submarine intended to carry out diverse explorations in distant areas of the World Ocean, take part in search and rescue operations, provide for installing underwater parts of equipment and conduct their inspections, test new types of research apparatus and monitor underwater transport routes.

As reports suggest, the nuclear-powered submarine will be the carrier of rescue deep-water and autonomous underwater drones. The Russian daily Izvestia reported on April 21, 2017 citing the Navy’s command that the Rubin engineers had re-designed the sub’s central part. As the daily’s material suggests, instead of the missile compartment, the engineers have designed a new and longer hold for special equipment and airlock chambers for divers and the crews of deep-water submersibles. Izvestia observer Dmitry Litovkin specified at the time that the sub’s re-designing would increase its length from the initial 154 m to 184 m (11 m more than the Soviet largest Project 941 ‘Akula’ sub). Thus, the Belgorod will become the Russian Navy’s largest submarine by its length.

On November 1, 2015, Russian central TV channels delivered reports from a government meeting in Sochi on the development of the country’s defense industry, showing the presentation of “the Status-6 ocean-going multi-purpose system” designated to “strike an enemy’s important coastal economic facilities.” The presentation pointed to the Belgorod and Khabarovsk submarines that were being built as the carriers of this system. No official comments followed.

On March 1, 2018, Russian President Vladimir Putin announced that Russia had created a deep-water nuclear-propulsion underwater drone. On March 22, the autonomous underwater drone was named Poseidon, following the results of open voting on the website of Russia’s Defense Ministry. Poseidon underwater drones have an intercontinental-range capability and can be armed with conventional or nuclear munitions.

In November 2018, Russia’s Defense Ministry reported that the Belgorod sub’s crew had been formed.

On February 20, 2019, Russian President Putin announced in his State-of-the-Nation Address to the Federal Assembly that the first submarine, the carrier of the Poseidon underwater drone, would be floated out in the spring of 2019.

Presumably, the Poseidon has been developed as a result of R&D work under the Status-6 program. A source in the defense industry told TASS on April 12, 2019 that the Belgorod would be floated out in Severodvinsk on April 23. The source specified that the sub would be the first carrier of Poseidon drones. Another source in the defense industry told TASS that the new submarine would be able to carry six strategic underwater drones.

The completion of the submarine’s construction afloat, the tests of its nuclear reactor and its dockside trials are expected to be implemented during 2019. A TASS source said the Belgorod would undertake shipbuilders’ sea and state trials in 2020, after which it would be delivered to the Navy by the end of that year.

Fantastic achievement for Russian Flot. Years ahead of USN.