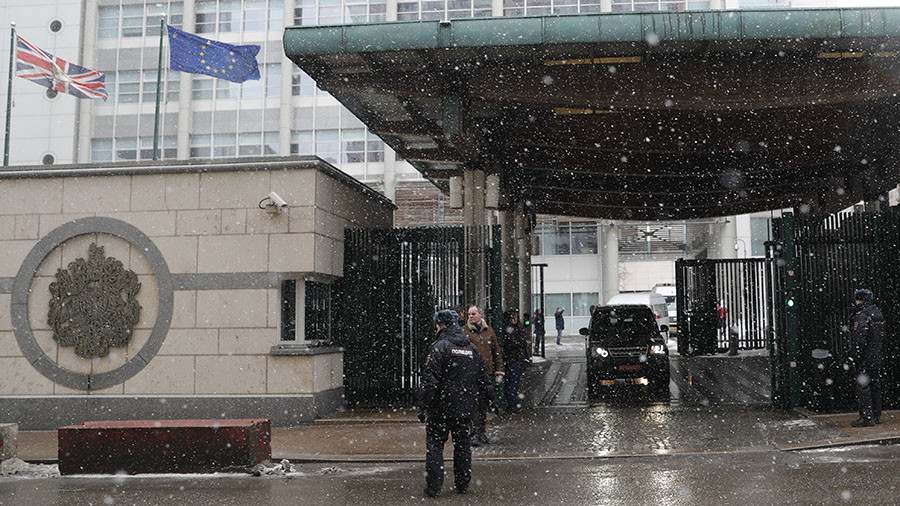 The foreign ministry also noted that it keeps a right to expel diplomats from Montenegro, Belgium, Hungary and Georgia in regard to their actions over the Scripal case.

The total number of diplomats that will be expelled is 48:

On March 17, the Russian Foreign Ministry announced that 23 employees of the UK Embassy in Moscow will be expelled from Russia. Moscow also revoked an agreement on opening and operation of the UK Consulate General in the Russian city of St. Petersburg and suspended the activity of the British Council in the country.

Russian actions were a response to the West’s aggression via diplomatic measures and channels.

Earlier in March, the US, the UK as well as several EU and non-EU states announced an expulsion of different numbers of Russian diplomats [the US expelled 60] over the so-called Skripal case.

Hint: Former spy Sergei Skripal and his daughter were poisoned with an alleged military-grand chemical agent “Novichok” in in Salisbury, the UK. The UK immediately accused Russia of being behind the murder attempt. The US and some other states supported the British claim. However, no evidence confirming the Russian involvement was provided.

Despite the tit-for-tat measures implemented by Russia, many experts note that Russia have implemented very soft measures because Moscow has provided foreign diplomats with long terms to depart from Russia. It was expected that Moscow will make direct steps aimed at damaging the intelligence infrastructure of Western states in Russia like it had been done in case of the UK.

Hint: According to experts, the British Council had been a hotbed of career officers of MI6 [The Secret Intelligence Service] and MI6 agent assets.

However, no such measures were implemented. Some experts think that this is a signal that Moscow is ready for a constructive dialogue with the rest of Europe.

However, SF has received another debatable but interesting opinion. According to this version, the Russian decision could be explained by a weakness of the Russian Foreign Ministry. A notable number of the ministry’s employees is reportedly unsympathetic to Russia’s modern day foreign policy. A major part of these unsympathetic employees is young people – sons and daughters of high-ranking officials.

The whole idea of expelling diplomats is counter productive, childish and gang mentality. Tit for tat was the only possible response.

The last paragraph is worrisome. Nothing is more dangerous than the people within a system who are unsympathetic towards the system and sympathetic to it’s enemies. They’ll ruin the country like termites from inside. I hope that’s not the case. When a diplomatic mission turns into espionage center (meaning diplomacy for them is a by-product and the first and foremost goal is spying and hurting the host country, not the other way around which we all know is some kind of norm) you’ll be a lot safer if you close it all together, like the famous “Den of Espionage”!

I wouldn’t sweat the kids Garga. I wish well to you.

Every Ukrainian official should be expelled and permanently banned. As for the children of the employees. Fuck em. Russian policy cant be decided by oligarch kids. I would limit the british to a kiosk in a middle of a zoo.

This is probably the first time I have seen someone mad at the British and not the Americans on this site. Its funny XD

Russia should just liberate Novorossiya and Malorossiya as they did wirth Crimea.

Russia did not liberate Crimea, the Crimean people voted to join Russia, and escape American tyranny. The rest of the Russian areas located within Ukraine, will probably make the same choice, as soon as they are freed from American tyranny, but it’s their choice to make.

I tend to agree, but Russia going on the offensive is just what the axis of evil wants. Germany is sort of standing firm against the axis powers, who are desperate to stop Nordstream 2. If Russia fights back, the US will be able to get the many German politicians and all the German media in Americas employ to stop the pipeline.

Never give an American what they want, unless it’s a bullet.

Mr. Putin knows each foreign criminals that have held Ukrainians, Syrians, Iraqis and Palestinians hostage. Through these countries they want to insecure Russian nation. Ukraine is the part of Modern USSR which is known as Russia. Anglo-Zionists want to keep Ukraine separate from Russia but their this dream would be soon become crumbled. —————————————————————————————————————————————-

The Russia decision is absolutely right. Russia should never cooperate or coordinate with these warmongers and terrorist supporters. Russia knows that Washington, UK, France and Israel are the main culprits behind the Skripal poisoning.

No, we all know that Ukraine did it. The west probably covered it up bc they have been arming Ukraine and dont want to look bad. See how Ukraine had more diplomats kicked out than anyone on that list? Wonder why….

If Ukraine did it, and im the president of the US I would frame Russia as well. I wouldn’t want to, but I would. Its all a game of strtegy.

Both sides kicking out diplomats is like a room of little children throwing tempers. It does not do anything. Russia is not that upset about it and neither is the west. They each still have diplomats stationed.

I think and believe that you may see many of the Russian diplomats expelled from a good proportion of the Countries … and those mentioned above from the other side will be back once the firestorm has finished – excluding the US and UK ones of course. I give it a month and a half.

Russia should push it’s military against US military in wherever possible.

Little Britain represented by the zionists May and the clown Johnson, are hero’s in the zionist world,but a laughing stock in the sane world.starting wars is one of their specialities.

…only the whole point of Scripal case was to make Putin react – remember he didn’t after Obama first expelled Russian diplomats in 2016. The end result is to have EU and Russian diplomatic structures dismantled and made totally unusable and inefficient to stop next Neocon war – probably one against Iran before the years end…Having said that Russians didn’t have any other option – you cant let other countries gang up on you like that – but at least we have our “cui bono” right there…