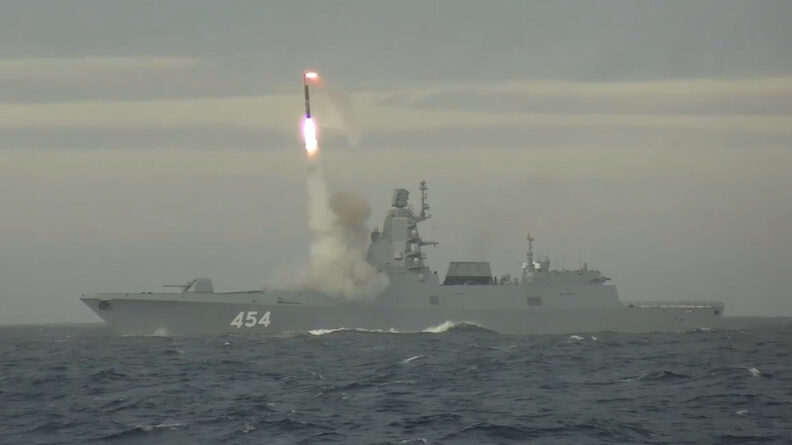 Admiral Gorshkov frigate of the Russian Navy’s Northern Fleet firing a Tsirkon missile during a test last May. Source: the Russian Ministry of Defense.

The unnamed source told the Russian news agency that the mobile ground launcher will be a part of a coastal defense missile system that utilizes the missile.

“The prototype of a mobile launcher of a coastal defense missile system, using a Tsirkon hypersonic missile, has already been created. As was the case with the Bastion system, the launcher will carry two missiles,” the source said.

The Tsirkon, which was developed by Russia’s NPO Mashinostroyeniya, is powered by a state-of-the-art scramjet engine that allows it to reach speed as high as Mach 9. The highly-maneuverable hypersonic cruise missile can destroy both naval and land targets. Its range is said to exceed 1,000 kilometers.

The missile is reportedly equipped with a high-precision inertial navigation system along with an advanced active radar seeker.

The Tsirkon’s ability to maneuver at a hypersonic speed means that it cannot be intercepted by existing missile defense systems.

It’s worth noting that Tsirkon missiles have been in production for around a year. Russian Navy warships and submarines have already carried out several successful-tests of the missile. As of now, the NATO has no match for the missile or a countermeasure for it.

you are as russian, as your mother, whos your sister, ist not a whore. anyway, some sources says 10-30m. but even 50m should be far enough with a payload of few hundret kilograms of high explosive, to punch out the shit out of everything.

I beg to disagree. I recently read an article about the new nuclear fuzes that the US has been deploying in recent years, and I think we can all agree that nuclear weapons carry so much more punch that aiming within a few hundred meters shouldn’t really matter. But allegedly, bursting even just 100m outside of the bull’s eye, versus blasting inside it, seems to make the difference between a ~35% and an ~90% chance of actually destroying the target. I guess with so much weaker conventional weapons, the difference should be much more pronounced, and that you need probably 5m or even less deviation from the bull’s eye to be confident that you actually destroyed your target. In the article, those scientists wrote that this makes the difference between needing an average of three shots vs. just one shot to destroy the target. I’ll leave it to you to assess the military impact of needing three shots vs. needing only one shot.

Do you have a link to that source? I would like to read it.

sorry to hear that. condolences to russia’s boderland called “ukraine.” the only complaint i have about the war is that it is taking a little more time that i would prefer. once done there, folks can move on to taiwan, south korea, etc.

Oh, but Russia was out of missiles in March, this is what USA /UK propaganda told us 🤣… Now Russia is firing about 80 missiles daily and maybe they will increase the hits. 🇷🇺

jens holm
Reply to  USA is a shithole, Europe becomes one

Thats right. We will see if the soon only has firecrackers.

Carlo
Reply to  USA is a shithole, Europe becomes one

Ukrop admin at work by deleting all pro-Russia comments

I am so sceptic. Is this another for show and they only has one.

It might be the same for the Armata and the smart bombs for the F35.

the F35 is riddled with problems, its just one of those money laundering ponzi schemes from the US to screw over Europe. The fact is that Russia is a more reliable partner then the US. With friends like the US who needs enemies?

USA is a shithole, EU is becoming one
Reply to  jens holm

Yes, only has one… hundreds thousands maybe 🤣. Maybe they already run out of missiles… Oh, that was in March 😃😅. Before launching 80 per day.

I was wondering if there had been problems with the area of effect of the initial boost (ignition/launch), if it had to be significantly greater than previous munitions or not.

As far as i understand, its not as fast as fast as an air launched one. On area of effect it would be the same, its only slightly slower moving to target, so more chance for enemy radar to detect it and react to the incoming missile.

Well, problems with any other phase of ignition or burn would not have adversely effected launch vehicle, is why.

The Russians know more about rocketry then the US. The US can’t even get a hyper sonic missile flying so far.

Also the Russians have an abundance of those rare earth minerals they use in rocketry ;)

Now drop one on Kiev…

No it is a scram jet powered manoeuvring anti-ship hyper sonic CRUISE missile produced by Russia. It is also very useful at attacking ground targets.

USA is a shithole, EU is becoming one
Reply to  Sephiroth

“low accuracy”!? The Ruskies managed to shot a rocket right into Dudaev head almost 2 decades ago! What more accuracy do you neeed for a rocket with such a powerful punch?!

Oops no hyperlinks here (understandable with the number of trolls).

“How US nuclear force modernization is undermining strategic stability: The burst-height compensating super-fuze”

From “The Bulletin of the Atomic Scientists”