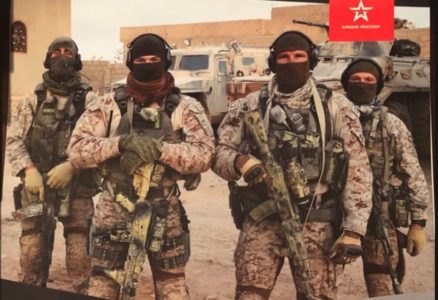 FILE IMAGE: Russian serivce members are in the province of Deir Ezzor

Russia has reportedly deployed additional Special Forces units at frontlines in Syria following the Su-25 shootdown in the province of Idlib.

According to reports, Russia’s Special Operations Forces are now actively operating in the provinces of Hama, Aleppo and Idlib, at the frontline between the Syrian Arab Army and Hayat Tahrir al-Sham (formerly Jabhat al-Nusra, the Syrian branch of al-Qaeda) as well as in the province of Deir Ezzor.

A notable number of Russian military advisers has been recently spotted in the area of the Abu al-Duhur airbase in the province of Idlib.

Some pro-government sources link the growing military activity with the upcoming advance on the militant-held city of Idlib. The lack of Turkish airstrikes on YPG positions in northwestern Syria may also indicate that the Turkish Air Force had been politely limited in its operational space in Syria.

I think they mean Saraqib

Sarqeb is the next headchopper held town and in SAA sights. Deir Ezzor is the east, near Iraqi border.

I believe the militant held city is Washington D.C.

Thank you for the laugh.

And the Congress is now the Occupied Territory!

the US congress is an occupying force.

I didn’t know that Mossad took back Deir Ezzor…

Can SF employ some corrector? These mistakes are hilarious.

I hope they are successful in hunting the CIA and SAS officers who supplies the MANPAD’s to the terrorist groups. I know they are hiding in the ground like the atheist they are hoping that the Christian Russians do not find their atheist asses.

I think them Russians first will turn them Headchoppers in Burning-Man-Pads…….any SAS officer they find hiding underneath the ground….. MIA……………….they are pissed off

Agreed, there’s no doubt that Idlib province is where most of the western operatives are now, and their capabilities (comms, satellite intel and targeting, man pads, false flags etc.) represent the greatest threat to all SAA/Russian personnel. I hope the spetznaz will take them out in a hurry.

Abu al-Duhur not Deir Ezzur. Therefore the city has again been retaken by the Turkish backed al-Qaida HTS/FSA terrorists.

What was meant is definitely not Abu Duhour as no attack on the western flank has any success, but be assured they are operating in those areas. The militant city meant is Manbij in Aleppo and the reason why Turkey isn’t flying so much is newly deployed air defenses in the region and why SSO are in the area. Russian contractors and military personnel are prepping the base for an Observation Outpost and have plans for more outposts in the region.

Yes, you’re right, and Abu Al-Duhur hasn’t been really taken by as you stated ‘Turkish backed HTS’ terrorists. And, several days ago it was interesting view here on Al quaida, and guy aaked ‘What is it, really? Is it fantasy of some American administration CIA bunch of neocons?’

Abu al-Duhur is the airport where the Russian Special Forces landed .

Sorry to bust your bubbles here guys but this is not for Movies or some sort of underground boyish fetish about spetsnaz..

Idlib is a jungle and filled up with battle-hardened fighters. There is huge difference between a battle-hardened individual and someone from the training ground and after the first bullets reality will eventually settle in.

Who cares about your dick filled jungle, they already endure many battle so idlib will not just their first hard battle, bring your shit get out from here and sniff it as jenkem cause no one want hear you and your little jihadist shit in here

apparently not, since theres not much left of idlib and its decreasing every day, hour by hour :))))

Revenge is part of Russian DNA, just ask the Nazis. The CIA and its headchoppers made a fatal mistake.

Russia is getting serious about whacking the CIA headchoppers. Time to deploy SAR units along with Hezbollah elite forces that rescued the SU-25 pilot previously.

Israeli soldiers have manhandled a group of European diplomats and seized trucks carrying tents in the West Bank… Diplomats were from Briton, France, Spain, Iceland, Australia and EU. The Zionist terror headquarter (Israel) is moving so fast towards its destruction. G-d says in Torah Leviticus 26:33 And if you do not listen to Me, and do not keep all these commandments… and I will scatter you among the nations, and send the sword after you, and your land will be desolate, and your cities destroyed.

The Zionist terror network headquarter (Israel) established in 1948 by illegal European migrants in Palestine. Israel each year violently persecute thousands of civilians in Palestine. Each year Israel kidnap thousands of adults and kids from the streets. Israel each year evacuate Hundreds of villages and towns by gunpoints and then demolish them and instead new buildings they erect for illegal European migrants.

Peaceful protests with flags, banners and placards is the legal right of all civilians. Anger eat wise. Anger is the sign of failure and frustration. Palestinian youths should not react with stones and knives but remain calm. Indeed soon Palestine will be freed. For a strong nation Education, unity, journalism, justice and a strong young qualified, English spoken leader, is very important. ————————————————————————————————————————————

Thanks for that Rob even though it’s off topic.

Look a lot of opposing forces are being deployed all over from the Baltic states to NK. You see US forces in Iraq relocation to safety areas and Russian forces plus S400 up to 4units sent to Syria suddenly.

Something is happening … and may start with NK

Nothing will happen, World Cup starts in Russia in a few months ?

When you least expect it….

Something is brewing up

The Russians were a little optimistic withdrawing their special forces. The US Deep State never gives up on its objectives despite suffering reverses; the Russians should know this. Good to see those Russian special forces back as the RuAF and SAAF are going to need them.