The Russian military has deployed at least one Tor-M2 air-defense system in its naval base in the western Syrian city of Tartus.

Satellite images released on October 10 showed the system in a fortified post inside the naval base, which is located in the northern part of Tartus city’s port. The base is also guarded by four Russian Pantsir-S1 systems. Moreover, a Syrian Pechora-M2 air-defense system is deployed nearby.

might be that Russia has deployed one Tor M2 to Tartus as supplement to the four Pantsir-S in order to bolster the air defence of the Naval Base.
If you compare the Tor M2 which protect the S-400 at Latakia with the Tartus site you’ll find the similarities pic.twitter.com/hduaMWpx4C

The Tor is an all-weather low to medium altitude, short-range surface-to-air missile system designed to engage planes, helicopters, cruise missiles, precision guided munitions, drones and short-range ballistic threats. The M2 variant has a range of up to 16 km.

Commander of the Russian Armed Forces’ tactical air defense, Lt. Gen. Alexander Leonov, revealed in a recent interview that the system, which was deployed in Hmeimim Air Base a few years ago, had shot down 45 drones in Syria. 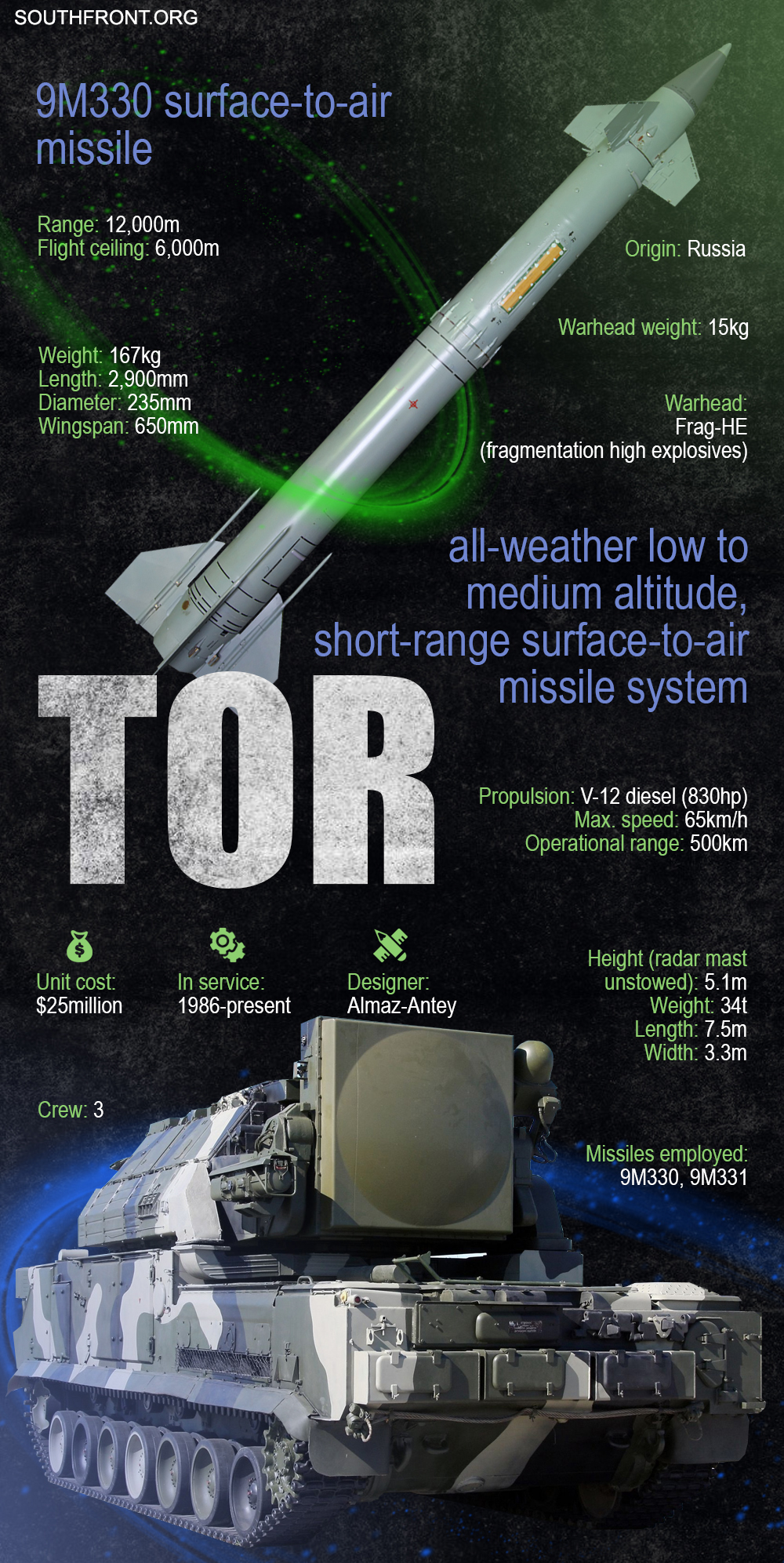 Tartus naval base is not the only Russian installation that was recently reinforced. New satellite images revealed that a large air-defense base in western Hama, where a S-400 long-range system is deployed, was reinforced with Pantsir-S1 systems.

Russia is currently working to expand its military presence in Syria, especially in the western part of the country. Earlier this year, an agreement to develop Hmeimim Air Base was reached.

That means Pantzir is not that good.

Is good when it still had ammo available, when its out of ammo then it will fkd up unless there are other aa defense like tor covering it

Then why they didn’t bring more Pantzirs since it’s newer than TOR and made for sale?

Perhaps they are loaded with different missiles for different threats?

Someone in the Russian military did a threat assessment and passed it on to a guy in another office who figured they needed a TOR to deal with the threat?

They are testing modifications or perhaps using real world deployment as a training tool?

The TOR is a dummy meant to draw enemy fire?

more pantsirs would just add too much cross fire, I assume you need tor2’s for back up SA missile deployment if needed, surprised there are no buk systems used to compliment the shorter range s300/400 missiles

Probably because they need defense against small drones launched by those jihadis. Buk would work against airplanes.

Pantsir is ok but they is better than others

My question is why didn’t they bring more Pantsirs if they are good?

SF had a video last year that showed an Israeli attack on a pantsir system, the Israelis used a combination of drone and missile to kill the target. The drone and missile approached the pantsir at low altitude and speed, then when they were close enough the drone launched a decoy missile which sped off towards the pantsir, the pantsir fired a missile towards the just launched decoy and when that happened the missile that was flying alongside the drone sped off and attacked and killed the pantsir system. A very elaborate kill method that would’ve cost the Israelis hundreds of thousands at the very least and possibly millions of dollars, even tens of millions if they’d lost the drone and 2 missiles, so they are very hard to kill, one missile alone can’t do it unless it’s so fast and maneuverable the pantsir can’t track it, and high tech missiles like that costs millions of dollars, not hundreds of thousands. They’re not invulnerable but they’re as good as anyone else has and better than most.

Very nice. I think that’s how thw Houthis strike targers in KSA too.

With NATO terrorists around he can never declare you safe, they do well to implement the defenses, they have no other choice.

I’m going to reconfigure my contact op equipment and location parameters. My 4×4 Bronco ll needs extensive brake work to safely travel the dangerous remote mountain roads. I don’t have the time or money for it at this time.

There are remote sites and parking lots in the same forest that are accessible in my 2014 Toyota Prius as long as the snow isn’t to deep. If I go in at night the forest away from the main campgrounds is largely deserted. Unlike the 80s era Bronco ll. The Prius has a comfortable reclining bucket seat and clean quiet heat that makes it suitable for meditation.

One of the reasons that this forest is largely deserted at night. Is the long history of non conventional activity. Including missing persons, deaths, and what appear to be credible good quality bigfoot and ship flyover videos.

There are areas of the forest closed off to motor vehicles. And rumors that it’s due to non conventional problems in some of those areas. The remote parking area where I’m planning to run my next night op contact outreach is adjacent to one of the closed off areas. There are reports of government US military and Department of the Interior specops teams working in these areas at times over the years on managing bigfoot populations there.

How much truth there is to that I don’t know. But I’ll be bringing security gear and weapons in case they’re needed.

Maybe you have mistaken the site :)

I’ve been to Dulce and talked with the locals. They’re almost all North American Indians. Where the fact stops and fiction begins on the Dulce reports I don’t know. Once I transition out of a 6 figure net worth to a 7 figure net worth. I may revisit some of these places. But once I establish quality repeatable non conventional contact of the type that I’m looking to establish. Which is to be able to travel off planet and get a ship of my own. I may not need to.

Can I come too when you leave earth to visit another planet, I promise I’ll keep your spaceship clean if you let me come, and I’ll even leave my evil weed behind, although I suspect I’d really be needing some of that evil weed by the end of the trip.

Do you have a working knowledge of quantum drive reactors. That would be a big plus. :)

No but since the nice aliens are giving Richard a spaceship it won’t matter. :)

Those mushrooms are growing well at this time of year….

That’s one way to go on an extradimensional trip. But it’s an option that I haven’t used. And I’m not sure that it would help with my goal of contact with ETs with ships in this dimension and universe.

I’ve used some over the counter supplements that are supposed to help with brain health and function.

The counter supplements aren’t working, so I suggest you try cannabis instead.

If you go missing from the forums we’ll all suspect you were either snatched and probed by aliens, eaten alive by bigfoot, or slowly tortured to death by a crazed psychopath, have fun.

Were you on drugs when you wrote this?

Yes I was but they’re nowhere near as good as the ones you’re taking, and even without any medical qualifications I’ll still suggest you stop taking whatever it is you are. And make some new friends too while you’re at it, ones that like talking about aliens and bigfoot.

I drove a semi for 20 years and never failed a DOT drug test. Nothing has changed. I still have DHS restricted area clearance and highway watchman security credentials.

Impressive. Just recently I passed a roadside cannabis test despite the fact I’d smoked some pot just a few hours before they tested me, and I admitted it to the police too, I was very lucky drug tests don’t always work correctly.

Are the Russians expecting an extra special missile attack?

I guess jamming two entirely different short-range SAM systems is more difficult as a proposition than one?

Especially if they operate on 2 different bandwidth, and I’ll bet they do.

It’s becoming obvious something’s happening, are the Russians preparing for something they know is about to happen and want to be ready for it when it does, 2 things come to mind. Are the Russians preparing for an all out assault on HTS and want to be prepared for any retaliatory rocket and drone attacks after operations begin. Or are they getting ready for an assault by the opposition forces, who’ve been on high military alert for several weeks now and are currently engaged in artillery duels with the SAA. The Russians aren’t beefing up defenses at 2 of their bases for nothing, there’s a reason they are, and just because we know 2 bases have been reinforced it doesn’t mean the rest of them haven’t been, perhaps these 2 bases are not the only bases being reinforced.